Italy’s Benetton family is under attack from politicians and the public following the involvement of one of their companies in the Genoa bridge tragedy.

Italy’s Benetton family is under attack from politicians and the public following the involvement of one of their companies in the Genoa bridge tragedy.

At least 38 people died and 15 were injured when an 80m section of the 1.2km long traffic bridge collapsed on 14 August, sending vehicles tumbling 45m onto buildings and a river bed. The bridge is part of the A10 toll road operated by Italian toll road operator Autostrade per L'Italia, which is 88% owned by Atlantia, in which the Benetton family is the largest shareholder. The cause of the collapse is not yet known.

Populist prime minister Giuseppe Conte said he would strip Autostrade of its right to operate toll roads and bridges across Italy. Austostrade operates more than 3,000km of Italian motorways, contributing well over half Atlantia’s €6 billion ($6 billion) in annual revenue. The subsidiaries are a sizable part of the €12 billion holding company Edizione.

Established in 1981, the third-generation Edizione is entirely controlled by the Benetton family. The four family branches control the capital through the related family holding companies. United Colors of Benetton co-founder Gilberto Benetton (77) serves as deputy chairman and second-gen Alessandro Benetton (54) is one of four directors on the board.

The Times reported deputy prime minister Luigi Di Maio as saying his was the first government “not [to] take money from Benetton”, and that Autostrade had been protected by previous governments.

Atlantia posted a brief statement on its website saying it had not received official termination from the government and that it was “continuing to support Autostrade per l'Italia in its debate with the Government Institutions in such a sensitive moment”.

Another statement reported by the Financial Times from Edizione said Atlantia had invested more than €10 billion over a decade in motorway modernisation and expansion.

Atlantia stock devalued more than 25% since the disaster. Standard & Poor's placed its ratings of Atlantia, Autostrade and Aeroporti di Roma, on CreditWatch Negative. 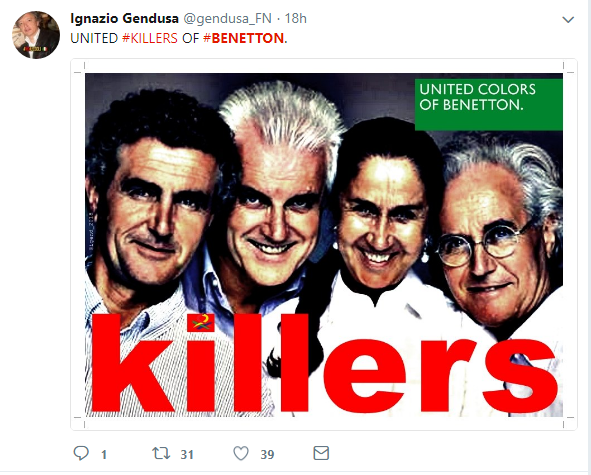 The Benetton reputation has also suffered with some social media users blaming the family for the disaster. The United Colours of Benetton advertisements have been parodied with images of the ruined bridge and #BoycottBenetton is trending.

The bridge collapse follows the death of Carlo Benetton at the age of 74 last month. The father of four died in his home in the northern Italian city of Treviso. He founded the United Colors of Benetton brand with brothers Luciano (pictured above) and Gilberto and sister Giuliana in 1965 and had a fortune of $2.7 billion, according to Forbes.

Luciano (83) returned to the helm of the struggling Benetton Group in May and installed family next gens in new and restructured positions of power.

Related Content:
Benetton co-founder shakes up governance with next gens
Toyoda attempts to save Toyota's reputation