Jet skis? Old hat. High-speed tenders? Everyone’s got one of those. A 3-person submarine? Now you’re talking! Alan Harper looks at the latest high-spec inventions to help adventurous types make the most of their superyachts and charters Jet skis? Old hat. High-speed tenders? Everyone’s got one of those. A 3-person submarine? Now you’re talking! Alan Harper looks at the latest high-spec inventions to help adventurous types make the most of their superyachts and charters

The classic water toys found aboard superyachts have generally been small, fast, noisy, and not especially sociable. Few things are more fun than a speedy personal watercraft, but the fun is generally confined to the user. Anyone trying to enjoy a post-lunch siesta while you execute ever-faster laps of the anchorage, or take off in one of the latest waterjet-powered hoverboards or jetpacks, might think a little differently.

Increasingly, though, superyacht owners and charter guests are looking for something more than just a quick blast around the bay. And advances in technology are keeping pace with this demand for more challenging and fulfilling ways of getting the best out of your leisure time.

Key to this trend are improved battery and charging technology. Building on the popularity of paddleboarding, Power Boards of Australia has developed a powered version fitted with a sturdy fin and integral propeller housing, which is capable of pushing the board along at up to 6mph. This is enough on its own in many cases, but as a supplement to the user’s paddle power it makes the board a much more versatile and capable tool for exploring the shoreline. The Power Board SUP is available in three lengths, with push-button controls you use with your feet. Charging time is 35 minutes.

The German-manufactured electric jet surfboard Lampuga Boost offers a unique twist of speed and excitement, but marries it to the latest technology. With a 15-horsepower motor and handgrip cable control, it is capable of more than 30mph. A full charge lasts up to an hour, so don’t get too carried away - make sure you’ve got enough juice to get back to the yacht.

For a longer-range and more self-contained approach to off-yacht expeditioning, a fleet of good sea kayaks is hard to beat. North Shore’s Atlantic model is a tough, seaworthy, and popular design with three watertight stowage compartments to allow for overnight camping trips. It features a retractable skeg for directional stability in both upwind and downwind sea conditions, and a hull designed to produce the ideal compromise between performance, stability, and handling. At nearly 17 feet overall (5.15m), its slender length-to-beam ratio promises to convert muscle into movement in the most efficient manner possible, and it weighs just 55lb (25kg).

If paddling just seems too slow – or too quiet – then a hovercraft is another way of breaking free from the mother ship for a tailor-made adventure. The British Hovercraft Co’s (BHC) Marlin III design seats two to three people, cruises at 28mph, and has a useful range, according to BHC, of about 100 miles. The engine is a four-stroke producing 37 horsepower, and the manufacturer admits that at full speed it produces 81 decibels of pure noise. The Marine III won’t take up too much room on board the yacht, measuring just under 11 feet long by six feet wide with the cushion deflated (3.30m x 1.85m), and weighing in at 460lb (225kg). Most importantly – in case you were wondering – it floats even with the engine off.

Hovercraft used to have that whole amphibious thing all sewn up, but these days such capabilities come in many forms. You can see the Quadski as either a personal watercraft with wheels, or an off-roader that can tow a water skier, but the fact is that it’s as happy making wake on the water or following trails through the woods. With folding wheels and powered by a 140-horsepower BMW engine, this amazingly versatile machine comes in single- and two-seat versions. The wheels deploy or retract in less than five seconds, so the transition from water to land is virtually seamless, and its top speed in either mode is an impressive 45mph. The wide track of the wheels and its low centre of gravity are said to give the Quadski a reassuring stability off road, while the clean and rigid vee-bottom hull ensures good acceleration and planing performance on the water. For two toys in one it’s remarkably compact – wider but only slightly longer than a three-seater Sea-Doo, and at 1,437lb (652kg) the two-seat XL model is well within the lifting capabilities of any good-sized yacht.

The Quadski could probably win a prize for being a genuinely useful superyacht toy. You can just imagine using one to hack inland from some remote anchorage in Alaska when the chef has run out of birch syrup. The Seabreacher, on the other hand, entertains an altogether more frivolous mindset. Powered by a Rotax engine complete with snorkel – so it can still breathe during moments of immersion – the Seabreacher is an extraordinary combination of personal watercraft and private jet. Under its tight-fitting cockpit canopy the controls will even seem familiar to anyone with a pilot’s licence, as with a combination of joysticks and foot pedals the machine is active on all three axes – pitch, roll and yaw. The powerful, two-seat Z model can even execute 360-degree rolls, like a sort of floundering fighter aircraft. A custom shark’s mouth paint job and marine-grade stereo system complete the package, for the ultimate in waterborne hooliganism. 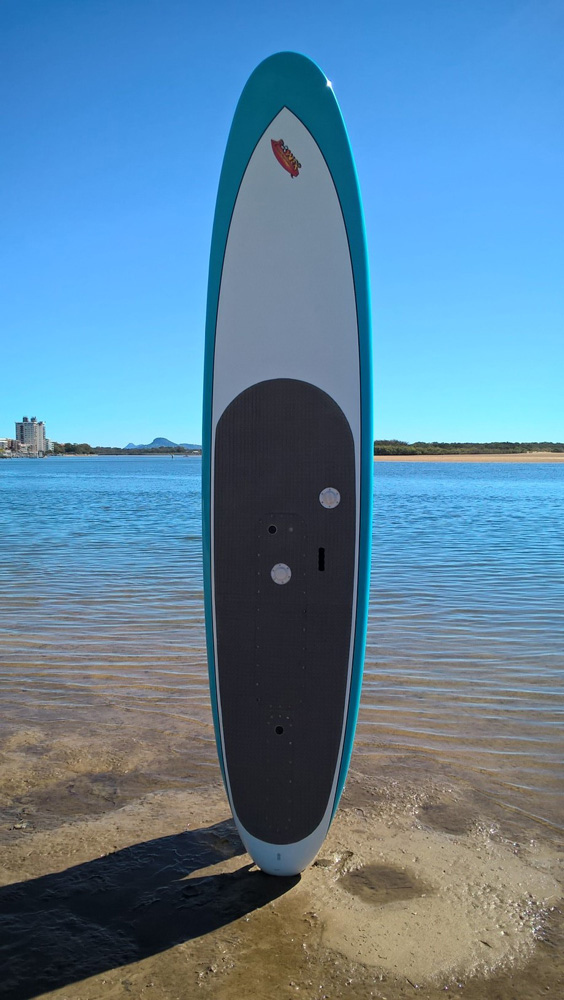 While a Seabreacher will no doubt give you plenty of chances to glimpse the green depths below, not always intentionally, it will always pop to the surface eventually. So will the Seabob, but not before you have spent as long as you like down there. A marine jet drive with handles, the controls could hardly be simpler – press green to speed up, red to slow down – with a display screen showing how much charge you have left. Steering is done with the body, so driving a Seabob involves a satisfying element of fitness and skill – just don’t forget that while you’re cavorting under the waves like a big electric fish, you also have to hold your breath. Running time is about 60 minutes, and a full recharge takes eight hours. Not for nothing, the Seabob is one of the most popular superyacht toys. It’s good, clean fun, and thanks to its diminutive size, every yacht has room for at least one.

For the ultimate underwater experience, however, you need – yes – a submarine. Fans of Das Boot might recall Jürgen Prochnow and his crew plunging as deep as they dare to escape attack when the ‘crush depth’ of their U-boat was less than 1,000 feet. Now you can buy off-the-shelf mini-subs that are unfazed by such pressure.

U-Boat Worx, in the Netherlands, builds a three-person model called the C-Researcher which has a maximum diving depth of 5,575 feet (1,700m) and battery endurance of up to 12 hours. Even the company’s less specialised models, such as the C-Explorer 3, can operate as deep as 980 feet (300m). It has an array of available accessories – cameras, lights, magnetometers, bottom profilers, and manipulator arms, for example – designed to appeal to professional as well as leisure users.

If the C-Explorer 3 seems like your kind of sub, you will need a substantial yacht to carry it. Although thanks to a compact design it fits into a space just 14 feet by ten, and less than eight feet high (4.23m x 2.90m x 2.33m). Its empty weight of just under six tons (5,950kg) requires some serious lifting capability. With yacht operators in mind, U-Boat Worx also offers the Super Yacht Sub 3, which although significantly smaller and lighter than its bigger sister, still has space for three people and can reach the same impressive depth. The two-person Sport Sub 2 is smaller and lighter still.

In Florida, Triton Submarines also makes a range of leisure subs, starting with the diminutive 10ft 6in (3.20m) 1000/2 model, a two-seater weighing just 6,800lb (3,100kg) which can reach a depth of 1,000 feet (305m) and remain submerged for up to ten hours. When it comes to extremes of depth, however, nothing on the leisure market can quite match Triton’s 36000/3 design, a three-seat vessel configured vertically to maximise its descent performance. In two hours, Triton claims, it will be able to descend to the deepest place on earth, the bottom of the Mariana Trench, nearly seven miles down.

If you’re of the opinion that even the comparative comfort of these modern mini-subs seems a little risky, the next best way to explore the deep is with a remote-operated vehicle (ROV). These allow you to discover what lies beneath your yacht from the comfort of the cockpit – and they can make themselves useful too, with their ability to inspect the hull and check the lie of the anchor. 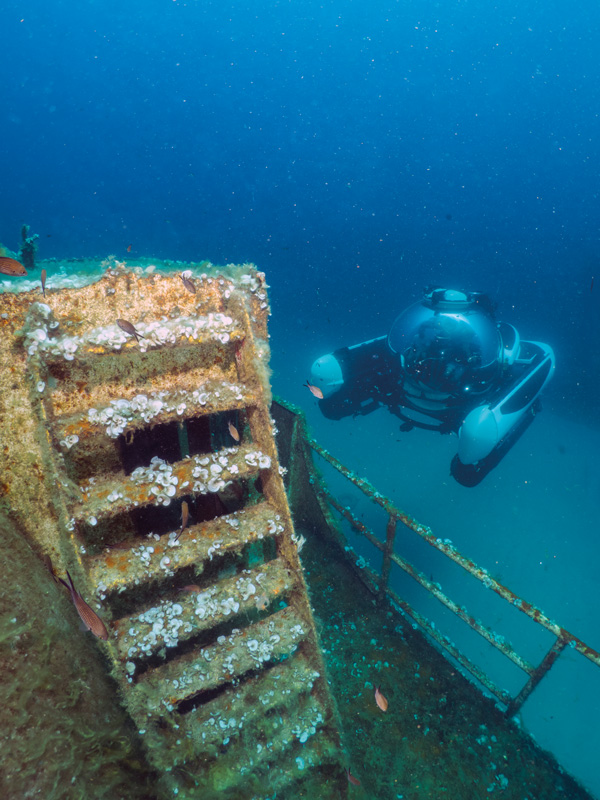 The LBV300-5 from Seabotix in San Diego can descend to 1,000 feet (305m) on its tether, controlled from the yacht with a hand-held console. Five thrusters – two fore-and-aft, two vertical and one lateral – provide the manoeuvrability needed to send back high-resolution colour video, while options include an array of powerful grabber designs with lifting and cutting capabilities. Virtually any yacht can carry one: the whole package, including cable reel and control unit, would easily fit into a couple of deck lockers, while the ROV itself weighs just 29lb (13kg).

ROVs are still used mainly in the commercial sector, but their versatility and compact size are helping to win them wider acceptance aboard superyachts. They are a perfect example of the way in which technological advances increasingly enable the new breed of superyacht owners, and charter guests to seek out more fulfilling ways of exploring and enjoying their environment, at the same time as lapping up the luxury of on-board life.