Fifth-generation family business Fiat is losing its image as an Italian company, according to an Italian business expert, as it expands globally and moves its tax affairs and company registration to other European countries. Fifth-generation family business Fiat is losing its image as an Italian company, according to an Italian business expert, as it expands globally and moves its tax affairs and company registration to other European countries.

Founded by Giovanni Agnelli in 1899, the company is now headed by fifth-gen John Elkann, who confirmed this month that the carmaker was moving its tax domicile to the UK and registering its business in the Netherlands.

The announcement follows an agreement in January for Fiat to purchase the remaining stake in US car giant Chrysler, which it did not already own, making it into the world’s seventh largest automobile maker.

The company’s headquarters will remain in Turin, but the movement of its tax domicile and registration has prompted anger in the Italian press, which report the changes will take away taxes from the struggling local economy.

"Many feel that the Agnellis are fleeing away because Italy is a declining nation," says Giuseppe Berta, an Italian family business academic at Bocconi University, and a former director of the Fiat Historical Archive.

He adds: "Obviously the decision to transform Fiat in a global company is changing the image of Agnelli family [in Italy], because they do not identify themselves with the destiny of the country. 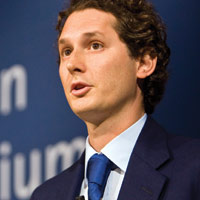 "And many consider as a proof the fact that the name of the leader of the family is J Elkann." Berta said. Elkann (pictured, right), who is also chair of the family holding company, Exor, was born in New York, and raised between the UK, Paris and Brazil.

But by registering in the Netherlands, the company is subject to Dutch company law and will not be subject to the UK Takeover Code, which was designed to protect and ensure equal treatment of shareholders of the same class should a company be sold.

Meanwhile, Elkann has been criticised for rubbing salt in the wounds after his company’s announcement, by implying the country's youth are prone to laziness.

Speaking to a group of high school students in the town of Sondrio, northern Italy, last week, Elkann said: "There is work, but young people are not so determined to find it.

Italy's youth unemployment – those aged between 15 and 24 – currently stands at a record high of close to 42%.

The remarks came the same week Fiat announced a one-year temporary redundancy scheme affecting up to 730 people at its largest factory, Mirafiori Presse in northern Italy.

He added: "John Elkann belongs to a family that has destroyed a large number of industrial jobs and as a consequence the hopes of many young people."

In 2011, Fiat controversially closed the Termini Imerese plant in Sicily impacting 1,600 workers – some of whom were transferred to other Fiat factories.