Sidney Toledano has been appointed chairman and chief executive of the fashion group within the world-leading family-controlled luxury giant LVMH after 20 years in charge of Christian Dior Couture.

The change at the top followed the full integration of Dior into LVMH in April in a reported €13 billion ($15.1 billion) deal.

The chief executive of Céline, Givenchy, Loewe, Pucci, Kenzo, Marc Jacobs, Rossimoda and Nicholas Kirkwood will report to Toledano (66), who also became a member of the LVMH Executive Committee.

Pierre-Yves Roussel stepped down as head of the Fashion Group after 10 years to become a “special adviser” to Bernard Arnault (68, pictured), the French billionaire who holds a controlling interest in LVMH. Roussel will take new operational responsibilities within the executive committee, of which he has been a member for 14 years.

“Sidney Toledano is the driving force behind the huge success of Christian Dior Couture across the world,” Arnault said in a statement.

“Over the past 25 years, he has done an outstanding job of developing the exceptional House of Christian Dior Couture and of promoting its elegance and modernity through its highly talented team of designers.”

Arnault said the appointment of Beccari as head of Christian Dior Couture “signals a new era”.

“After several years as marketing director of Louis Vuitton, he oversaw strong growth at Fendi by expertly harnessing the creativity of Karl Lagerfeld and Silvia Venturini Fendi and closely aligning it to the Roman influence of the House. He will be an excellent leader who will steer Dior towards ever greater success in the future.”

Arnault added Roussel played an instrumental role in the selection of the best creative talents and in implementing innovative strategies and high-performing teams within the different houses.

LVMH announced the appointments will take effect from the beginning of 2018. The new chief executive of Fendi was yet to be announced.

The founder of Panera Bread will transfer from chief executive to chairman just months after his US bakery-cafe chain was acquired for $7.5 billion by JAB Holding, owned by the German billionaire Reimann family.

The move on will allow founder Ron Shaich (pictured) to “better allocate his time” between Panera, JAB initiatives, and his personal investments and interests, the business said.

Shaich’s transfer from C-suite to board room was announced on the same day Panera declared it intended to bring Au Bon Pain back into the fold before the end of 2017. The Boston-based bakery-cafe chain was founded by Shaich and his late business partner Louis Kane in 1981. The company went public in 1991 under Shaich as its chief executive and acquired Saint Louis Bread Company in 1993. Saint Louis Bread was rebranded Panera then in 1999 Au Bon Pain was sold to devote all resources on Panera.

Shaich said the time was right to step down as chief executive while still staying involved in the business as chairman. He praised Hurst for his “innovative thinking, technological savvy and ability to drive change.”

JAB is associated with the Reimann family, one of the wealthiest and most reclusive business dynasties in Europe. Wolfgang Reimann, one of four siblings descended from 19th century chemist Ludwig Reimann, has a net worth of $4.1 billion, according to Forbes.

The pace of worldwide growth is predicted to slow over the next few years despite the value of liquid assets held by the global population exceeding $100 trillion by the end of 2017.

China was forecast to maintain its second position after the United States in the global wealth market rankings up to 2021. India was expected to surpass France by the same year, reaching eighth position. The average Hong Kong citizen was predicted to hold more assets than an individual in Switzerland by 2021.

Backed by The Global Wealth Market 2017, London analytics company GlobalData expected Asia-Pacific to be the best-performing region with a compound annual growth rate of more than 8% in 2017-21. However, a slower rate was predicted for Europe in the same period—just over 5%, down from 7% over the previous five-years. 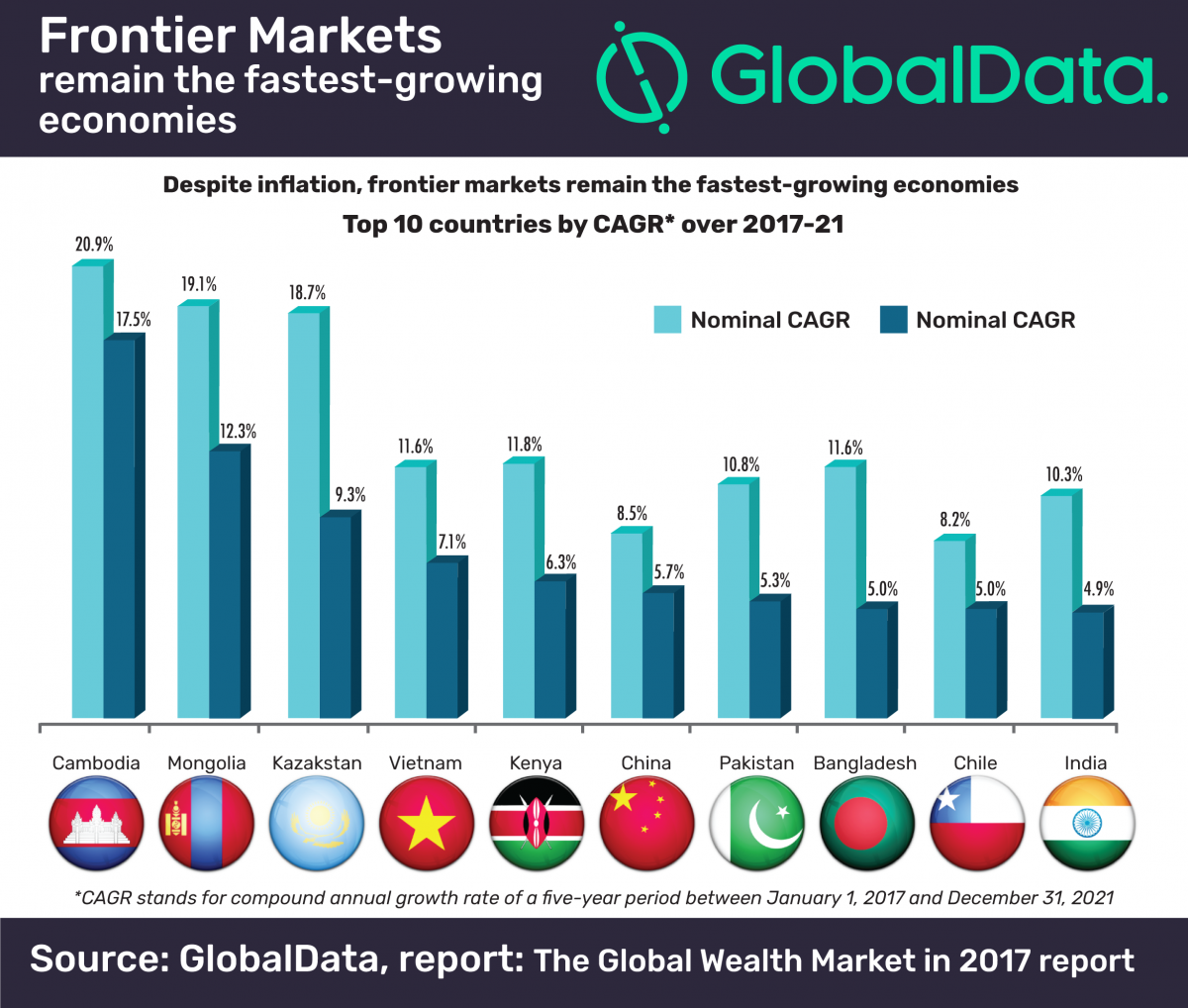 GlobalData pegged Asia-Pacific “frontier markets”, such as Mongolia and Kazakhstan, to outperform emerging and mature markets in nominal and real terms. However, the company also expected inflation to continue eroding the fortunes of those territories.

“This is just one of the reasons why wealth managers should be careful when considering expanding in these markets,” Silvana Amparbeng, wealth management analyst at GlobalData, said.

“Despite being the fastest-growing they are still small in terms of aggregate assets. Moreover, stark wealth distribution inequalities and other local economic factors reduce wealth managers’ opportunity further.”