Why society wants the wealthy to pay for coronavirus crisis

The author of a new book on international attitudes to the rich warns the wealthy are already being called on to pay for the coronavirus pandemic and are a minority in danger of being scapegoated. The author of a new book on international attitudes to the rich warns the wealthy are already being called on to pay for the coronavirus pandemic and are a minority in danger of being scapegoated.

With his new book The Rich in Public Opinion: What We Think When We Think about Wealth about to be published in Spain and Italy, author Rainer Zitelmann and his researchers expanded their original survey on societal attitudes on wealth-holders. They asked the same questions in those two new countries as they already asked in the United Kingdom, France, Germany and the United States.

Zitelmann told CampdenFB his surveys found that young Americans had developed the most negativity towards the moneyed and the French were the most envious of the affluent. He considers if business families should take the risk of raising their public profiles and why the villains in Hollywood movies are so often rich.

Which findings from your research into the public’s attitudes to the wealthy in UK, French,  German, Spanish, Italian and US societies surprised you the most?

Zitelmann: I was particularly fascinated by how attitudes to the wealthy differ so significantly between age groups in the six surveyed countries. In all five of the European countries where we conducted our survey, younger people under the age of 30 have a more positive attitude toward the wealthy than do older people over the age of 60.

The difference between age groups is particularly pronounced in Italy, where young Italians are really positive about rich people and older Italians are extremely negative. But, and this is very interesting, we discovered that in the US the picture is flipped completely on its head: Americans over the age of 60 have a particularly positive opinion of the rich, whereas younger Americans under the age of 30 are very negative.

We also got some very thought-provoking results in terms of the Social Envy Coefficient we developed especially for this study. It is one indicator (although not the only one) of the extent of social envy in any given country. France has by far the most envious society (1.21), followed by the Germans (0.97) and the Italians (0.62). We found the lowest Social Envy Coefficients in Spain (0.43), the US (0.42) and the UK (0.37).

Why should the wealthy care what the societies they live in think about them?

Zitelmann: I am often told that rich people shouldn’t complain about prejudice. After all, they live comfortable lives. On the one hand, that’s true. However, throughout history, affluent minorities have often been singled out and subjected to hostility—including expulsion and murder. Just think of the horrors that befell the so-called Kulaks during the Russian Revolution, think of the victims of the Chinese Cultural Revolution and the Khmer Rouge massacres in Cambodia. And these are just a few examples.

Yes, these are extreme cases. But prejudice and hatred against the wealthiest members of society can have extremely negative consequences even in their more “moderate” forms. In the 1970s, for instance, some of the country’s rich citizens were forced to leave Sweden because they were crushed by the weight of excessively high taxes. This is among the subjects I cover in one of my other books, The Power of Capitalism.

Will families of wealth become scapegoats for politicians looking to recover economies from the pandemic?

Zitelmann: Yes. We are already seeing precisely this in Germany, where all of the left-wing parties are calling for “the rich” to cover the costs of the coronavirus pandemic. In Argentina, the government has just introduced a new wealth tax on its richest citizens and justified the move by claiming it will help the country pay to ease the pandemic. And then there are the crackpot conspiracy theorists who claim that some of the richest people in the world, people like Bill Gates and the Rothschild family, are to blame for the Covid-19 pandemic.

This is the same pattern that we have seen again and again throughout history: In times of crisis, minorities have always been scapegoated and blamed for society’s ills. First, politicians in the U.S. and Europe failed to get to grips with the coronavirus crisis, then people started looking for scapegoats against whom people’s aggression can be directed.

Do you think U.S. attitudes to wealth will change as a consequence of Donald Trump’s presidency?

Zitelmann: Of course, in the eyes of anyone who doesn’t like rich people anyway, Trump has reinforced and even amplified some of the stereotypes and prejudices against the wealthy.

Given the correlation you noticed between whether an interviewee personally knows a millionaire and the interviewee’s opinions of the rich, what advice would you offer families of wealth when engaging the public, or should they keep a low profile?

Zitelmann: Your question zeroes in on one of the most important findings of the entire study. Now that we have the results for Italy and Spain, allow me to briefly outline our findings: 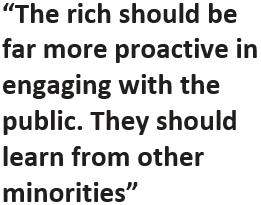 To get back to your question: In my opinion, the rich should be far more proactive in engaging with the public. They should learn from other minorities. Only groups that fight back, that actively take a stand and push back against prejudice, can ever hope to improve their situation.

Is it inevitable that rich people will always be the villains in Hollywood films?

Zitelmann: For The Rich in Public Opinion we analysed a sample of Hollywood films—the book actually contains an entire chapter on this very subject. Based on our in-depth analyses, we compared the treatment of rich characters on the one hand and their “non-rich-counterparts” on the other. We found that rich characters were predominantly portrayed as having serious moral failings.

Common traits included dishonesty, greed, the ruthless pursuit of power and selfishness. This, of course, plays on and reinforces existing prejudices against the wealthy. I think this also has something to do with the fact that most artists, filmmakers and intellectuals don’t actually like capitalism (even if they have a lot of money themselves). If you want to find out more about this, you should definitely read my book The Power of Capitalism. Many readers have said that the book’s best chapter is the one in which I explain why intellectuals don’t like capitalism.

You have said your wealth research has only just begun.

Zitelmann: Yes, for me, the first step was my research into the psychology of the super-rich, which then fed into my book The Wealth Elite.

The Rich in Public Opinion then showed the other side, namely how the rich are regarded by the societies in which they live. However, this is just the start. I hope that young scholars will continue this project, because there is still so much to explore.

So far, I have financed all of the research myself because no one else has been willing to provide financial backing. Such international surveys are expensive. I’ve so far spent more than $150,000 on the entire research project—all out of my own pocket. Of course, I would be delighted if there are other wealth-holders who appreciate the importance of this research and would be willing to help finance future projects. Above all, I would like to conduct the survey in more countries.

In January we will be conducting the same survey in Sweden and I will explore the data we collect in a Swedish edition of The Rich in Public Opinion.

Related Content:
Enviers and scapegoaters: Rainer Zitelmann on The Rich in Public Opinion
Sustainability helps Benetton, LVMH reputations as well as the planet

Which behavioural ‘gig’ do you play in your family business?
Finding the Goldilocks zone of conflict in family business
Collaboration, division of leadership key to preserving family business
Dennis T Jaffe on how to write your family constitution
Book reviews: Be Fearless, Wealth of Wisdom, Transforming Legacy Organizations