British toy maker Hamleys has been sold to Asia’s richest man, Mukesh Ambani, for £68 million ($88 million)—the latest in a string of retail acquisitions by his family conglomerate, Reliance Industries.

The £68 million price for Hamleys and its 167 stores across 18 countries is significantly lower than the £100 million ($129 million) C Banner paid to acquire the retailer in 2015. Last year, Hamleys reported a £9.2 million ($11.8 million) loss, blaming Brexit and the threat of terrorism for the downturn.

“The worldwide acquisition of the iconic Hamleys brand and business places Reliance into the frontline of global retail,” Darshan Mehta, president and chief executive of Reliance Brands, said in a statement.

Ambani (pictured), worth some $50.7 billion according to Forbes, already operates 88 Hamleys stores across 29 cities in India. In recent years, he has expanded his retail portfolio, snapping up a string of well-known brands such as Burberry, Canali, Paul Smith, Armani, Just Cavalli and Jimmy Choo.

Ambani is the second-generation managing director and chairman of Reliance Industries and son of founder Dhirubhai Ambani. The family conglomerate has interests in petrochemicals, retail and telecommunications and posted annual revenues of $66 billion in 2018.

The heir to the Coca Cola fortune, Greek billionaire Alki David, has been arrested in St Kitts in the Caribbean after authorities found $1.3 million worth of cannabis plants on board his private jet.

David, 50, was taken into custody at Robert L Bradshaw International Airport and charged with intent to supply, possession of controlled drugs and the importation of a controlled drug into the federation after customs officials found about 5,000 plants along with seeds and a variety of other hemp products, according to the St Kitts Nevis Observer.

However, in a statement David has claimed the products on board were all hemp—a non-psychoactive strain of the plant grown specifically for industrial uses related to his legal cannabis-growing venture in the region.

Speaking to Manx Radio in the Isle of Man, a spokesperson for David said authorities in St Kitts were informed prior to landing of the presence of “pure hemp” cargo on board—including clone plants, hemp seed and SwissX CBD oil products as part of a new venture.

In April, David and US billionaire Chase Ergen announced they formed SwissX, a consortium which specialises in cannabis based medicines and hoped to develop the legal cannabis market in eastern Caribbean nations, including St Kitts and Nevis, Dominica and Antigua.

David is the heir to the Leventis-David Group, which holds the majority share in Coca Cola Hellenic—Europe’s largest bottling company. 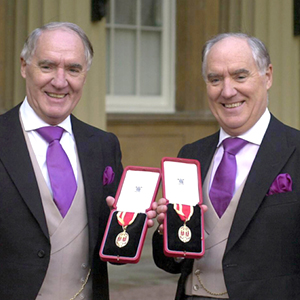 Sir David Barclay, co-owner of The Telegraph newspaper and the Ritz Hotel with his twin Sir Frederick, is suing a French writer over a play he alleges is based on him and his brother.

Barclay (pictured left with his brother) is suing Hedi Tillette de Clermont-Tonnerre for violation of privacy and defamation. A court in the French city of Caen was due to hear the case on Monday and is expected to last several months.

The play, “Les Deux Freres et les Lions” (The Two Brothers and the Lions) does not mention the Barclay brothers directly but there are alleged parallels drawn.

According to the theatre’s description of the play, it chronicles “the irresistible rise of two Scottish immigrants. The tale tells the rise of two twins who came from a poor background to have at the end of the 20th century one of the biggest fortunes of Great Britain.”

According to defence documents, the playwright claims he only drew inspiration from well-known aspects of Barclay’s life and almost all the elements in the play are “fictional and imagined by the author”.

The reclusive Barclay twins were born into a modest Scottish family and together built a business empire, which includes newspaper The Telegraph and magazine The Spectator, the London’s Ritz and Monaco’s Mirabeau hotels, and UK e-retailer Shop Direct, which reported sales of £1.96 billion ($2.2 billion) for the year to 30 June, 2018.

The brothers do not sit on the boards of their businesses anymore and are instead represented by Sir David’s sons Aidan and Howard, with Aidan managing their UK businesses.