The world’s far-reaching technological shift was a factor in the break-up of the 115-year-old Danish family-owned business Maersk, according to Professor Philippe Pelé-Clamour (pictured), HEC Paris adjunct professor specialised in executive education.

Pelé-Clamour was asked to comment on the accelerating recovery of the world’s biggest container shipping line after years of heavy losses. In $12 billion worth of transactions since the restructuring announcement in 2016, Maersk transformed from being a conglomerate, with a corporate layer overseeing independent, stand-alone business units that had their own net profits, to one customer-focused company with one bottom line.

The streamlined company cut its debt in 2018 by about $6 billion to $8.7 billion by selling Maersk Oil, selling shares in Total and cash from separating Maersk Drilling. Revenue in 2018 was $39 billion, up 26% on the year before, despite higher bunker fuel prices and lower than expected growth in container volume. Pre-tax profit in 2018 was $238 million, a vast improvement on $25 million in 2017 and a loss of $376 million in 2016.

“Structural change with the creation of a new Ocean unit instead of eight separate divisions will facilitate/consolidate all blockchain initiatives inside the company. Digital transformation requires changes for both the central business processes of the organisation as well as support processes. The business stakeholders have always expected organisations to innovate, to adapt, or to die.” 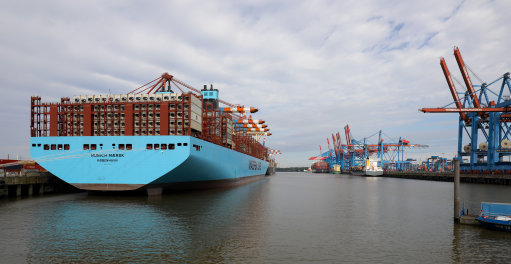 Pelé-Clamour said family business strategies needed to accommodate and focus digital technologies so they can stay close to their customers, their expectations and demands.

“This is an opportunity for the millennial generation to seize this issue in family councils and boards of directors. Some have chosen to become entrepreneurs outside their family and often in digital. Regardless of their patrimonial responsibility, ‘digital natives’ can more easily challenge this issue in the corporate governance structures.”

Jim Hagemann Snabe, 53, the “Mr Digitalisation” appointed chairman of AP Moller-Maersk in early 2017, said innovative digital solutions in 2018 were “removing the complexity and increasing the visibility and bringing much-needed simplicity to supply chains and documents,” in the company’s annual report released today.

“As the world’s largest transportation and logistics network, AP Moller-Maersk is well placed to lead the digital transformation of the industry,” he said.

AP Moller-Maersk was established by Danish shipping magnate Arnold Peder Moller in 1904. The majority shareholder is AP Moller Holding with 41.5% of the shares and 50.1% of the votes. Ane Maersk McKinney Uggla (pictured), 70, Moller’s granddaughter, is the chairwoman of AP Moller Holding and vice chairwoman on the Maersk board. Her son Robert Uggla, 40, became Maersk Drilling’s vice chairman in January, 2019.

In the announcement of the restructuring in 2016, she said Maersk activities, strategy and structure had always undergone changes and changes would continue to stay agile.

“While we are rooted in shipping and energy, we must never become static in a dynamic world.”

Family capital diversification: Protecting the family’s financial assets
What’s on the horizon for private markets in 2023?
Technology: Why change is here to stay
Discover the company committed to building smaller, cheaper and safer nuclear energy for the future
After reaching extraordinary valuations, zeitgeist stocks are yet to return to reasonable levels