Affluent families are good at structuring their decision-making around investments, but could more formal processes around philanthropy also be helpful in building family unity? Daniel Bardsley reports Affluent families are good at structuring their decision-making around investments, but could more formal processes around philanthropy also be helpful in building family unity? Daniel Bardsley reports

It is two decades since the late Canadian business icon Paul Desmarais stepped down from running the Power Corporation of Canada and passed day-to-day control to his two sons.

Paul Jr and Andre had plenty of experience ahead of becoming co-CEOs, each having joined the company in the early 1980s before going on to hold important roles.

Yet, even until his death in 2013, aged 86, it was said that Paul Sr still played a part in decision-making at the corporation, which he took control of in 1968.

A long period of shared responsibility helped strengthen bonds within the family, because, even now, Paul Jr and Andre continue to successfully run the company together, representing a remarkable 20-year period of joint control.

Their example chimes with recent research by Morgan Stanley Private Wealth Management and Campden Wealth which found that relationships within wealthy families were cemented by joint decision-making in relation to how assets were managed.

Family Decision-Making reported that 44% of members of ultra-high net worth (UHNW) families believed decision-making had a positive effect on their relationships with other family members, while only 19% saw the effect as negative. The findings came from quantitative research on 59 members of North American families each of which have more than $35 million of assets, plus interviews with 15 family members.

Unfortunately examples abound where a lack of collective decision-making can lead to acrimony.

Earlier this year nonagenarian Sumner Redstone, 92, the outgoing chairman of US theatre company National Amusements, which controls CBS and Viacom, unleashed a very public succession battle at Viacom between its non-family chief executive and his daughter, Shari, for the chairman’s role. Unilateral decisions about the group’s direction by Sumner led to the public disagreement. His son, Brent Redstone, sued the family in 2006 over the running of its business interests, arguing that Shari was favoured over him and that he had been shut out of the company affairs. It was settled out of court the following year. 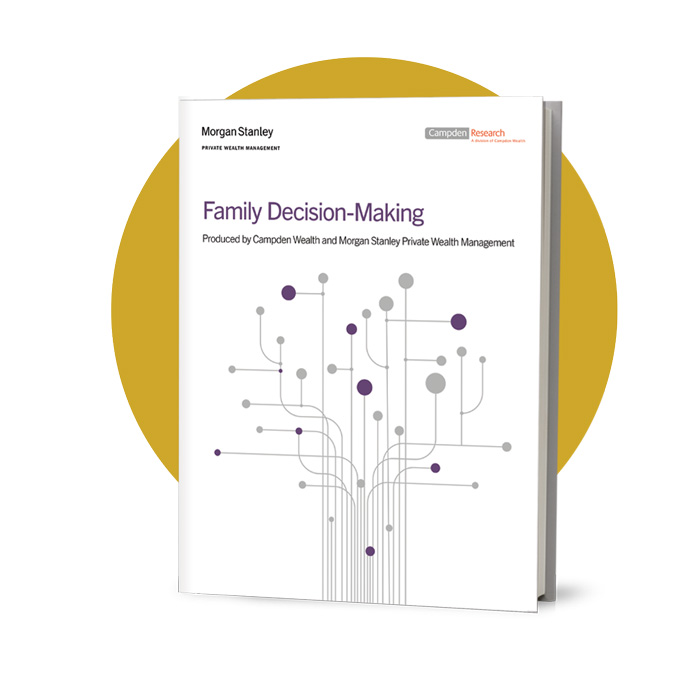 David Bokman, managing director and head of UHNW resources at Morgan Stanley, says that, contrary to what might be expected, formal wealth decision-making “is proving to be beneficial for family relationships”.

James Chrisman, professor of management at the University of Mississippi, agrees that decision-making by families can benefit from being formalised. He cautions, however, that this should not compromise responsiveness.

“[Families] don’t want to make [formal procedures] so cumbersome they’re unable to react to opportunities and threats that fall within their strategic domain,” he says.

Another key finding of the research centred on the importance of professional advisers, since in 89% of cases they were seen as influencing investment goals.

“That UHNW individuals arguably listen more to their advisers than their own family members shows the premium placed on good, professional investment advice,” the report notes.

The study found that professional advisers were used in 41% of cases to decide overall asset allocation, while family office executives were involved in 38% of instances. For decisions about specific investment opportunities, professional advisers and family office executives were used 44% and 35% of the time respectively. To divest in vehicles or companies, each group was used in 41% of cases. Advisers had executive decision-making power over tactical matters in a third of families.

The report indicated that formal decision-making was less of a priority when it came to philanthropy: just one third of families had formal policies to manage philanthropy.

Yet, Bokman says, “With philanthropy, it’s almost more important to have formal decision-making.”

“There are so many possibilities for miscommunication,” he says.

Just as families tended to have fewer formal decision-making procedures for philanthropy, they also relied less on advisers for it: in just 16% of families did advisers have a role in philanthropic decision-making, compared to 38% for intergenerational wealth transfer.

“At first one would think that maybe the family doesn’t consistently care about philanthropy as much as it does about other topics, but I don’t think that’s the case,” says Bokman.

“I think philanthropy raises more emotional and intra-family issues than people acknowledge − it goes to core values, and it raises issues of fairness, of who gets to make decisions and what causes are important.”

There may be, for example, generational differences in philanthropic priorities, or siblings with contrasting views. Formal decision-making may address these.

“They should try to pursue as much formality with philanthropy as they do with everything else,” says Bokman.

Aside from the benefits it brings to the wider world, philanthropy can be an excellent training ground. One family member chief executive of a single family office quoted in the report described philanthropy as “very useful ... for teaching the next generation the value of wealth”. It was also seen as valuable in teaching responsibility and financial decision-making.

Impact investing may also prove useful for training younger family members, especially because it involves a “double bottom line” by aiming to produce a positive social or environmental return, as well as a financial one.

Formalised decision-making, for philanthropy and investments, can be promoted by advisers. Their objectivity, says Bokman, allowed them to bring families “past the obstacles to that formal decision-making”.

“The most important thing to do is to tell stories about similarly situated families, illustrating in a very relatable way to the family what the risks and benefits are with respect to these processes,” he concludes.

“Family Decision Making” underscores the importance of effective communication between family members and their trusted advisers, and a key role for more formal processes to promote better decisions. That alone, is something worth talking about.