Prices for the rarest and most prestigious wines have hit record highs. CampdenFB looks at how investors can gain a piece of the action. It might be tricky, when faced with a bottle of fine wine, to do anything other than open it and pour yourself a glass. But for those who can eschew instant gratification, wine can offer a fantastic investment. Through the stock market turbulence of recent years, fine wine has become a safe haven.

Over the last five years, the Liv-ex Fine Wine 100, which tracks the price of the world’s most sought-after wines, has outperformed leading benchmarks, including the FTSE 100 – rising 62% over the period, and 15% in the last two years. In many months in recent years, the finest of Bordeaux returned more than an investment in gold or oil.

The most common wines for investors are the big five – the premier cru, or first growth, wines from Bordeaux – Haut Brion, Lafite Rothschild, Latour, Mouton Rothschild and Margaux. The returns can be spectacular. Imagine you had bought a case of Lafite 1982, the most prestigious Bordeaux from the best year of the last century, from the château when it was released. That would have cost you £250 (€300) then. Now, you would sell that for £39,000, an increase of 15,500%.

A case of Margaux from the same year has risen 3,381%, from £270 to £9,400, according to Bordeaux Index, a London-based wine merchant. These are exceptional numbers for the finest of top-end wines, but the company says that a long-term investment in fine wine has returned 13% a year in the past two decades.

The real excitement for investors, of course, is that it could give even better returns in the future. Prices for the best vintages will only rise as supply is becoming scarcer. This is because wine from the best vintages is being drunk, and so they become rarer and therefore people will pay more for them, and also because vineyards are reducing their yields – ostensibly to improve quality, but this also has the handy effect of making the wine rarer.

Prices for first growths have also rocketed in recent years as the Chinese market has boomed, with the Russian and Indian markets widely expected to be next. “At one time, the only people buying fine wine from Bordeaux were German barons, lords and ladies, and aristocracy with castles and underground cellars,” says Stephen Williams, managing director of the Antique Wine Company. “There is now also a whole world of entrepreneurs and an enormous surge in demand from new economies.”

The Bordeaux winemakers – a canny lot – have specifically targeted new Chinese wealth, just as they targeted Americans in the 1980s when the US’s wine market boomed. The best example is that Château Lafite put the Chinese symbol for the number eight on to the bottles of the 2008 vintage. Prices went through the roof. Some put the Chinese interest down to ignorance and apocryphal tales of people putting Coca-Cola in their Lafite abound, but for those willing to sell off their Lafite, it has been a boon. Regulation has helped boost the Asian market, too. In 2008, Hong Kong scrapped all duties on wine and beer, instantly making it the new global centre of wine sales, and many wine auctions now take place there. All the big merchants now have an Asian office.

It has become a cliché to say that Chinese wine investors are unsophisticated and value the name on a bottle rather than what’s inside it, but things are changing and tastes broadening. “Until recently, the focus was really on the first growths – and on Lafite in particular. But in the last year demand has broadened to include a wider group of wines from Bordeaux, Burgundy, Italy and the Rhone,” says Donna Steyn from Liv-ex. Even if you stick with Bordeaux, there are good investments to be had beyond the first growths. For example, vintages of Pontet-Canet, Cos d’Estournel and Lynch Bages rose between 7% and 14% last year, according to Liv-ex.

Investing in wine is an unpredictable business – and not only because of periodic manias such as the Chinese thirst for Lafite. Only three or four years out of 10 produce an investment-quality wine.

While it’s often clear from the weather during the growing season and the first tastings of the wine when it is bottled, you can never be sure for years how good an investment a particular vintage will turn out to be. Wine is nothing if not a speculative investment. Growers also understand that rarity pushes up the price of their product and these days produce far less wine than they used to.

Wine has another problem, which it shares with all luxury goods: forgery. There is no independent regulation of the wine market and fakes do exist. There were numerous scandals in the 1980s and 1990s with some very old – that is, 19th century and earlier – wines being faked. David Elswood, international head of fine wine at Christie’s (pictured right), the oldest international auction house for wine, stresses: “So many people have been scammed in the world of wine investing – you must ensure only to deal with reputable people with a history in the business. As wine is a hot topic for investment, rather like gold, don’t underestimate the ability of fraudsters to draw sophisticated investors in.”

But, he adds that “as long as investors are aware of the potential for fraud and don’t fall into this trap, and only deal with people who have unimpeachable records of trading in the business for at least 10 years,” they are unlikely to be scammed. Most merchants say as long as you invest in post-1982 wines, forgery is unlikely. Knowing a wine’s provenance over its whole life, too, is vital.

Elswood says: “In this respect, wine is similar to artwork, as nobody would buy an expensive picture at auction unless the provenance is known. If you are buying a brand new wine straight from the château then it’s not of importance – but if you’re buying it at five or 50 years old, you need to know where it’s come from. At Christie’s we mainly deal with private clients – and the beauty of that is that they’re fastidious in their record keeping of provenance, and it’s these wines which make the top price.”

So what should you invest in? It might be tempting to go for first growths or the other big, glamorous names that fetch telephone-number prices – many people’s heads are turned by these. A 1947 French Cheval-Blanc (another Bordeaux) sold for £192,000 in 2010 through the Antique Wine Company, which also recently sold a bottle of 1811 Château d’Yquem – generally considered the greatest sweet wine – for £75,000. Bonhams says that its top individual lots have come from Burgundy, with a case of Romanée-Conti 1990 going for £126,000 and another buyer paying £74,750 for a case of the 1988 vintage. Meanwhile, its top Bordeaux lot recently was £46,000 for a case of Petrus 1982. 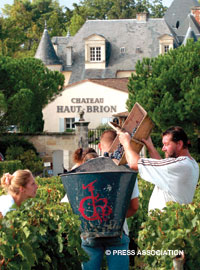 While those sorts of numbers grab attention, people buy those wines to drink, not as an investment. For investors willing to look beyond the first growths there is plenty of choice. Williams, like Steyn, currently favours the 2009 Château Pontet-Canet. He says: “It is from one of the first fully-certified biodynamic red wines in Bordeaux, and it boasts the legendary Château Mouton Rothschild as its immediate neighbour.” The wine currently trades at £1,400 per case, compared to the 2009 Château Mouton Rothschild, which is currently £7,300 per case.

But as with any investment, diversification is the key. A merchant will tailor a portfolio for you, depending on how much you want to invest, your risk profile and how long you want to invest for. “We probably monitor about 40 different producers for the majority of our clients’ portfolios,” Williams says, adding: “Within that group there are not really any quirky brands and it’s important to avoid fashion-driven wines when establishing portfolios, as they lack sufficient staying power and are thus less likely to hold their value.” A return of 6% to 15% a year is achievable, says Williams, and Christie’s suggests that you should plan to hold on to wine for at least five years – this is a long-term trade.

That said, it would be stretching things to say that wine is a sure-fire money-maker. In the last quarter of 2008, the Liv-ex index fell by 20% – although it rebounded in 2009. And after spectacular price rises in the 18 months to July 2011, the market fell 21% in the second half of the year. That decline was down to a combination of the global economic climate, greater availability in the market of younger vintages from certain châteaux and a price correction following speculation in 2010. However, prices have started to recover this year.

While Hong Kong has a vibrant wine market and much attention has been focused on the spectacular Chinese market, for wine enthusiasts and investors the old world is still the place to be. Elswood from Christie’s says: “London is really the trading hub for wine so the majority of options for buying and selling are here. The same brokers and traders you buy the wine from might want to buy it back years later – as a market you need to get comfortable and close to a small group of traders who you use for buying and selling.” And if at the end of that time it doesn’t work out, at least you can comfort yourself with a glass of wine.


The knowledge
For outsiders, wine can be an arcane world, with experts claiming to taste all sorts of exotic things in a glass (“wet dog and posies”). That traditionally put many people off investing in wine. But in recent years things have become a bit more transparent. Twenty years ago it was not that easy to find the price of a wine but these days you can find out what, say, a case of Lafite is worth simply by searching on sites such as Winesearcher.com.

When investing in any asset, the first step is knowledge – and there are various methods of learning about wine investment. For example, one option is to subscribe to independent information sites such as Liv-ex.com, Decanter.com and JancisRobinson.com. Also, it’s worth building a relationship with a wine merchant.

Further, when considering a worthwhile investment, take into consideration the view of US commentator Robert Parker Jr, the world’s most powerful wine critic, as what he says goes, and wine merchants pay particular attention to his evaluations. He has a history of calling top wines before his peers, giving wines a score out of 100. So anything bearing a Parker score of 90-plus is likely to be an investment worth considering. The widely recommended 2009 Pontet-Canet got a score of 100 from Parker.

How much does it cost?
There will be several costs to factor into investing in wine. Firstly, a merchant will charge either an upfront fee of about 5% of the total value of the wine or an annual management charge. When it’s time to sell, they will take a commission of about 10%.

When dealing with wine for investment, always have the wine held in a fully-bonded warehouse. Most wine merchants will store and insure your wine, with annual fees varying for the size of your “cellar” and the merchant. So your collection needn’t be dependent on the size of your basement. Ideal storage conditions are 12 degrees to 15 degrees and 75% humidity, with bottles fully stabilised and left lying on their sides and away from direct sunlight. This costs, but is vital.

Investors also have the option of buying wine at auction, or through a wine fund – however, there aren’t many of these to choose from and the fees can be high at about 2% of assets under management, plus 20% of the profits. Many also have early redemption fees, which can eat into potential returns.

When it comes to selling wine, a broker is often the best bet for a quick sale, but offers poorer returns so many wine investors simply sell it back to the merchant; however, they will take 10%. Auction houses are another option, but bear in mind auctioneer’s fees can account for up to 15%.