Despite the huge growth of the very rich in the big emerging markets, family offices have been slow to take hold. Campden asks why. Those familiar with the trend say that in Hong Kong alone there exist at least 20 such businesses. In Singapore the numbers are harder to quantify, but a rough estimate puts the total at 10. These multi family offices are based on their venerable European and American counterparts like Fleming Family & Partners in the UK, Rockefeller & Co in the US and Harald Quandt Holding in Germany, although they are unlikely to have an initial rich family behind them to seed the business like the three cited examples from the west.

But just like their counterparts in the west, the Asian MFOs offer boutique services and of course say this enables them to provide more bespoke services. These days it’s all about personal service and family offices can provide this better than big wealth managers, so the theory goes. The trouble is, unlike their counterparts in Europe and the US, these MFOs have little if any money to manage. They are, in most cases, still waiting for Asia’s very wealthy families to give them their assets to manage. Most are optimistic that it’s just a matter of time before they start getting assets – why would they be in the business otherwise? 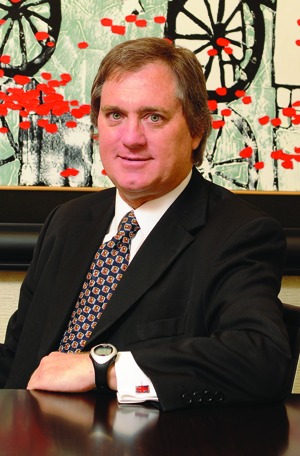 Richard Harris (pictured, left) can vouch for this – he’s been an asset manager for more than 20 years in the Chinese special administrative region and knows emerging markets pretty well. “There’s plenty of businesses purporting to be multi family offices, but it’s a different matter when it comes to their ability to raise funds. Most of them are struggling to do so.”

These days there’s little doubt where much of the world’s wealth is being generated, with emerging markets now accounting for more than 50% of the world’s gross domestic product – and that has created some huge fortunes. More than half of the Forbes’ billionaire list is now from emerging markets, compared with a third 10 years ago. The number of ultra-high net worth individuals in emerging markets has also grown strongly over the last 10 years. According to recent Credit Suisse research, out of the 18 countries with the highest number of UHNW individuals – those with net assets exceeding $50 million (€38.4 million) – half were in emerging markets, with China the second biggest country for the UHNWs after the US.

But this ballooning of wealth hasn’t been reflected in the number of family offices. Although it’s difficult to put a definitive number on how many family offices there are in the world, because what passes off as a family office is open to wide interpretation, most analysts agree the numbers are likely to be between 2,500 and 3,000, if single and multi family offices are both included.

Harris, who now runs an asset management advisory business and used to work for a prominent local family as a family office principal, agrees, but says it’s also about perceptions on return on investments. “There is little incentive to set up a family office, or at least not like we know in Europe and the US,” he says. “The core business is likely to be generating growth in the double digits so it’s a hard sell to promote a family office that might generate no more than single digit growth on the invested assets.”

The importance of the core business – and the money it’s generating for the family – was a central theme in Campden’s research on family offices in Asia-Pacific, Growing Towards Maturity: Family Offices in Asia-Pacific Come of Age. Out of the 35 family offices canvassed for the research, more than 81% said they retain significant shareholdings in the core family business. A common sentiment expressed among the very wealthy in emerging markets was the view of a family business head of a Latin American business, who says: “The best way of ensuring the family is catered for in the years ahead is to be found in the family business.”

If and when families in emerging markets do eventually decide to set up a family office, often a mismatch exists between the family’s expectations of what the office should do and the people they hire to staff the business. This is true everywhere, but is probably more acute in emerging markets. “Quite often family offices are set up as a place to park a large sum of money between projects,” says the Hong Kong former family office CIO. “Consequently, they aren’t taken seriously enough and are staffed to reflect this.”

So professionalism – and the lack of it – is a big issue. When family offices are set up, often a senior professional of the core business – such as an accountant – is given the job of chief executive of the business. Typically, these individuals have earned the trust of the family through many years of service. But that doesn’t mean they have the right expertise. “Many of them often have little or no understanding of investment processes – essential for the running of any family office,” says Harris.

When families do decide to seek outside professionals to lead their family office they often want to hire high-profile investment bankers. “Many times they will want to hire a Goldman Sachs banker, an alpha type, who can supposedly bring their alpha-moneymaking to the family office,” says Harris. “Unsurprisingly, this type of individual doesn’t last because they will normally want a free rein on the running of the business. And that’s unlikely to go down well with the family.”

Ming Wong, a former senior executive of a family office in Hong Kong and regional director of Campden Asia, reckons that regardless of who is hired at the top of the professional ladder of the family office, the average period of working at the office is short – much less than in Europe or the US, where staff at family offices often stay for more than five years and many much longer. “In my experience, many are leaving no more than three years into the job,” he says.

Pretty much everyone agrees that if the family office model is to develop in emerging markets, wealth owners will need to accept greater professionalism of the staff running offices. Pay is a big part of this. Senior executives say that many families haven’t yet accepted how much they need to pay top staff. “They see compensation as coming out of their own pocket,” says the former CIO. “That needs to change for the healthy development of the sector.”

When it comes to MFOs, the biggest hurdle to their development in emerging markets is likely to be confidentiality, say experts. “There has been slow growth in the multi family office model in Hong Kong and the rest of Asia as families are often reluctant to put their money with other family money,” says Bonny Landers, chief executive of the Hong Kong-based single family office RS Group. “They fear matters of confidentiality could be compromised.”

Harris agrees and additionally reckons the wealthy still feel much more comfortable putting their money with private banks, or keeping large sums in cash at their local bank branch. “Unlike the mega-rich in Europe and the US, which wouldn’t necessarily have a problem with a multi family office, the mega-rich in Asia do,” he says. “They keep their money in cash, and/or with a wealth manager.”

Of course, many of the wealthiest families invest their money with family offices based in places like Switzerland, New York, Miami and London. The depth of expertise in these markets might also be hindering the local development of family offices, as families prefer giving their money to specialists in the big established financial centres.

This is likely to be particularly the case where economic and financial security is still, whether real or believed to be, compromised. This quarter’s FO profile looks at the experience of a Nigerian who set his family office up in the UK – and there are likely to be many other examples like this. Experts say having family money in the west is still a priority of many elites from emerging markets. That’s not changing any time soon. “Capital markets might have evolved hugely in emerging markets, but very wealthy families still want a lot of their money in western institutions,” says Harris. “That hasn’t helped the evolution of local family offices.”

Harris reckons family offices in emerging markets might be developing more indirectly, through the family-owned financial businesses. In Hong Kong, these are groups like the Bank of East Asia and Sun Hung Kai. In Brazil, BTG Pactual and even Banco Itaú, one of Latin America’s biggest financial institutions, might fulfil this role. In the Middle East, Arab Bank and First Gulf Bank might fit the bill.

“It would be interesting to know how many families put their money with family-run financial institutions,” says Harris. “If they do then these banks, asset managers and stock brokerages might be the real multi family offices in places like Asia and other emerging markets.”

Why the Cayman Islands is a preferred jurisdiction for family offices
A deep dive into deep tech
Chinese wealthy turn to family offices for next generation succession planning
Career trajectories to the top: Where does the ideal family office leader come from?
Family offices transfer wealth, rebalance portfolios and embrace technology during Covid-19 pandemic