Mathilde Thomas and her husband’s beauty brand has conquered France. America is next. New York, a week after Superstorm Sandy, and the morning of Obama’s re-election. In her new store in a prime corner location on the Upper East Side, Mathilde Thomas is lining up bottles of Caudalie skincare products with the precision of a chemist. A digital display shows the view from her bedroom at her family’s vineyard, Château Smith Haut Lafitte, with leaves rippling in the breeze. The central counter is made from wine barrels and the wallpaper is decorated with pictures of the varieties of grapes the family grows.

French-born Thomas is now a New Yorker, living nearby with her business partner and husband, Bertrand, and their three children. “Two years ago my husband and I felt that we were missing a spark and we wanted to reinvent ourselves,” she says. “In France we are part of the landscape but here we were pretty unknown and we thought being in New York would be a bridge to conquer South America and Asia.” It’s a smart move; the American skincare market is worth around $3.3 billion (€2.6 billion) with anti-ageing products showing double-digit growth despite the ongoing downturn. 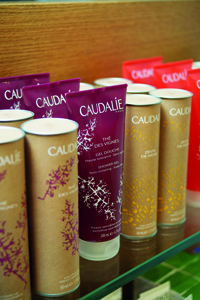 Since it launched in 1995 Caudalie has been one of the beauty industry’s great success stories, having introduced the concept of using grape seeds to make hugely effective skincare products. It all came about, just like the best stories, from a chance encounter. “In 1993, Bertrand was my college boyfriend and we were finishing our studies,” Thomas explains. “I was 23, very young, and I was learning to become a perfumer and Bertrand was an intern at L’Oréal. We took a group of scientists on a tour of my family’s vineyards and one of them stopped in front of a vat of grapes seeds and told us we were throwing away the most interesting part of the vine.”

The man who made this rather dramatic pronouncement was Professor Joseph Vercauteren, a chemist from the University of Montpellier. He believed that the polyphenols in grape seeds contain so many antioxidants that they could be a thousand times more effective than vitamin E in fighting free radicals, the substances that are believed to attack the skin and cause wrinkles. In the quantities they appear in grapes, Vercauteren was saying, they could even repair any existing damage. Thomas’ interest was, of course, piqued. “So I said: If that is true why doesn’t L’Oréal or another of the big skincare firms use them?,” she remembers, “and Professor Vercauteren explained that it was because they were extremely unstable. If you put the grape seed extract raw into skincare it would turn into something like red wine.” 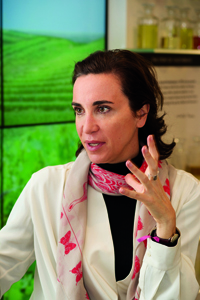 Backyard business
Luckily, Professor Vercauteren had been working on a way to stabilise polyphenols since the early 1990s and had just patented a method of doing so, with a view to using them in skincare. The fit with Mathilde and Bertrand was obvious. The couple both worked in beauty, and literally had a source of grape seeds in their backyard. “The hard part was to convince Professor Vercauteren not to sell his patent to a big skincare group but to work with us,” says Thomas. He agreed, and Caudalie was launched. (The name, by the way, is a term wine-tasters use to measure how long a wine stays on the palate – one second of flavour equals one caudalie.)

Were they nervous about launching a skincare line? “No, because we were naïve and very young and we didn’t think: ‘Oh, there are 800 brands in every retailer’.” What came easily when they were launching the brand? “Nothing.” With her friendly but deadpan delivery, it’s hard to imagine Thomas doing anything that comes easily.

Just as hard as it is to imagine her doing anything other than setting up her own business. Indeed, entrepreneurship is in her DNA. Her paternal grandparents set up their business after World War II. “They created a chain of supermarkets from scratch and it’s difficult to create something from scratch that doesn’t exist,” she says. “They were pioneers at the time and my grandmother was a great source of inspiration for me because she was living at a time when women were not working, but she was working like crazy.”

Before inheriting the family business in 1970, Thomas’s father Daniel Cathiard was a ski champion and a member of the 1965 French Winter Olympics team, as was his wife and Thomas’s mother, Florence. Within 20 years of taking over the family business, Genty, Cathiard had transformed it into the 10th-largest mass distribution group in France, with 15 hypermarkets and 300 supermarkets. The number of employees grew from 900 to 9,000.

On the side he opened a chain of international sports goods shops called Go Sport, while Florence opened her own advertising agency and later became vice-president of McCann Erickson Europe. The family sold all its business interests in 1990 to buy Château Smith Haut Lafitte, planning to live there and to produce wine. But clearly that go-getting gene meant that the simple life was never going to be an option. “When you are born into a family of entrepreneurs you know that everything is possible,” Thomas explains crisply. “I learned that if you start something you should finish it and if you do something, do it well. But I learned that at home not at school.” Did she ever have any interest in taking over the family businesses? “No,” she says. “I always wanted to be a perfumer, a ‘nose’.”

Cash-flow
But life took her in a different direction. Having nailed the Caudalie concept, acquired the patent for stabilising polyphenols and secured the source of grapes there was one problem – funding. “The banks said: ‘Oh, no no no, it’s too risky’,” Thomas says. (“Now there isn’t a single week when a banker doesn’t call asking to invest in the company,” she adds, gleefully.) So they went to her father. “We did a beautiful P&L and he invested €150,000, which was enough for us to produce our first batch of a thousand products: two moisturisers and a dietary supplement.”

Products in hand they approached pharmacies individually. “The pharmacists would say: ‘I will take the products because it has got great research behind it. But it won’t sell because you have competitors who have millions in advertising, so you need to go and see the press.’ So I went to see the journalists one by one in Paris, my husband dropping me off on his motorbike.”

Famous fans
Celebrity intervention helped too. “Carla Bruni endorsed the product and Madonna said she was a big fan of the beauty elixir and that was huge, it really helped.” Just before the grape harvest Thomas approached French TV stations and told them about turning grape seeds into her face creams. “And they loved the story.”

Soon there were calls from all over Europe, the US and Asia and by the time the first Caudalie Vinotherapy spa opened at Château Smith Haut Lafitte in 1999, success was creating its own problems. “We had CNN and ABC fighting for the story and four pages in People magazine, but then we started to sell in Japan and the US, and we had to service these countries and travel all the time, but also look after Europe.

"If I had to do it again I would first grow Europe and then the US and I would pick one country at a time and not 10, it was too much.” Thomas is now all about measured expansion. “We were convinced we had the best skincare in the world but we went too far too soon, but in your early 20s how do you know? You don’t.”

As for working with her husband, “it’s great because I trust him but we are extremely different. I sometimes can’t believe we have spent 20 years together because we are so different.” But she credits him with the success of the business. “If I had created Caudalie without him I would create great products but I wouldn’t sell them.” Although growing up she showed no interest in the family businesses, would she like her children to continue Caudalie? “Yes of course, but currently my four-year-old wants to be a princess, so I’m not sure about that.”

Would she like to go take over the chateau? “I would love to!” she enthuses. “My parents live in this unbelievable environment. It’s a great lifestyle, drinking and talking about wine, and now they have the hotel with 50 rooms, they have people coming from all over the world to meet them.” Clearly the family is now deeply rooted in Bordeaux, but did the move to New York two years ago reignite Mathilde and Bertrand’s missing spark, as it was meant to? “Oh yes, more than that,” she says, smiling widely. “We are on fire.”