A view from Beirut

Entrepreneur Lara Tarakjian and her brother are definitely smooth operators – they made their fortune with a chain of 20 laser hair-removal clinics in the Middle East.

Entrepreneur Lara Tarakjian and her brother are definitely smooth operators – they made their fortune with a chain of 20 laser hair-removal clinics in the Middle East.

The way Silkor came about was very simple. My brother was hairy! We are all hairy in this family, we have Armenian origins. He wanted to get rid of his hair and he visited the only clinic in Lebanon. The customer service wasn’t very good, and it clicked in my brother’s mind that they are obviously making a lot of money and they didn’t even really need new clients. Silkor was born in 1997 when I was 18 and my brother was 25. Back then we weren’t really called entrepreneurs, there wasn’t any support for entrepreneurs, and my brother couldn’t find a bank to give him a loan, not like today when there is lots of start-up funding. I joined him as a secretary while I was still at university, he had only one employee. For four or five years he only had three employees and there were times we had to close for a month or two. It took a while to get going.

I graduated in 2001 as an engineer. I’d studied for five years and I had found a job in Paris, but this was just after 9/11 and they couldn’t get the papers because I am Lebanese. Nobody was recruiting me, so I started helping my brother. About a year afterwards we went to Paris for a conference and we could see the potential for our business. That was when I decided to set engineering to one side and put everything into the business, and this is what I’ve been doing ever since. Now we are all across the Middle East and we will open a clinic in London as soon as we can find the right location. If you want to expand in the Middle East, you have to be in Dubai, and if you want to expand anywhere else in the world, you have to be in London. (Brother and sister entrepreneurial duo Lara and Oscar  Tarakjian pictured, right.)

My father is from a totally different area of business, he is a steel-trader. To this day he doesn’t really understand what we do and he doesn’t understand really how hair removal can make so much money. For him a business has to be a “real” thing – metals, cars, apartments. But he is a self-made man, an entrepreneur, and we grew up with the business so that helped us a lot. He never said it but we could feel that my parents would have preferred we worked for a company and become engineers, doing things the traditional way. But at the same time, they pushed us silently. One thing we did get from my father is that he doesn’t believe in renting, and we always buy properties as much as we can, and we buy them against another business.

The Lebanese are different from the rest of the people in the Gulf Cooperation Council region because we speak Arabic, and that helps because many of our clients only speak Arabic and many of the Asian women with jobs in the sector can’t communicate easily with them. You don’t get many Kuwaiti, or Emirati women, for example, working in this business. So being Lebanese helps us. We also have a great service culture. 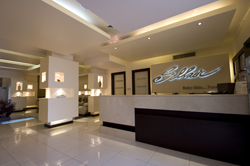 How has the Arab Spring affected us? Not at all. Look, I live in a country where you go to sleep when there is peace and you wake up and there is war. In 2006 when we had the war here in Lebanon for 40 days. Instead of crying about it my brother went to Dubai and that was when we opened our first centre there. We take negative things and we turn them into positives, we are used to instability. We don’t have roadmaps in this business – we are constantly tweaking our plans. We were going to open in Egypt in 2011, we had the location, we were all ready, but we had to change our plans. (Silkor salon pictures, left.)

Now we have Syria on one side, as well as Israel/Palestine on the other. But it’s been like this since I was born so we just don’t see it as a problem. What we do is expand. Lebanon is a very small market so we have to go out. That’s the way we think, we have to adapt, we speak four languages, we adapt to cultures, we adapt to people. We’ve been raised like this and we’ve got used to it. To me it’s very normal. I never watch the news. I’m in the office until 9pm every night anyway. I don’t get home in time to see it, so really I don’t know what’s going on.