CampdenFB celebrates this month the 75 leading lights in the family business and family office space over its 75 issues. Last week we profiled some of the inspirational figures in the Americas—this week we take a look at the major players in the dynamic region of Asia-Pacific.

Visit CampdenFB.com throughout October as we reveal the Top 75 Leading Lights of the world’s ultra-high net worth multigenerational family business community in the Americas, Asia-Pacific, Europe and Emerging Markets.

Over the past 75 issues, CampdenFB has had the pleasure of featuring literally hundreds of fascinating family businesses that we have scoured the globe to uncover. So to mark our 75th edition we decided it would be a great opportunity to reflect on our wide cast of characters. The list is not supposed to be exhaustive, and in fact we had to make a couple of very hard decisions on who to include however, it is supposed to reflect a varied mix of the established icons of family business right through to some lesser-known rising stars. Welcome to our ’75 for 75’.

Chao is the granddaughter of TY Chao, founder of Hong Kong’s shipping group Wah Kwong. After graduating from the Imperial College University of London and a career in finance and shipping, she joined the family firm in 2002 and was appointed chairwoman in 2013. Only two years later, Chao was elected chair of the Hong Kong Shipowners Association, the first woman to take the position. She is a trustee of the Hong Kong Maritime Museum, among several non-profit roles.

Grandson of founder Chen Yu Tung, Cheng is the third-generation heir of one of China’s most influential families and the mastermind behind Chow Tai Fook, one of the world’s leading jewellery brands, which posted a revenue of HKD59.2 billion ($7.5 billion) last year. Prior to taking over from his father, Henry, Cheng worked at Goldman Sachs and Credit Suisse as an investment banker. His sister, Sonia, oversees the family’s hospitality arm, Rosewood Hotels and Resorts, and plans to open 40 hotels by 2020.

Ambani chairs energy to retail giant Reliance Industries which generated $89 billion in revenues in 2019. Ambani worked alongside his father and founder of the company, Dhirubhai Ambani, starting in 1981. Together, the duo expanded the business to provide telec-ommunications through its 4G phone service Jio and launched India’s largest retailer, Reliance Retail. After Dhirubhai’s death in 2002, Ambani and his brother Anil split up the family empire, and Ambani gained control of Reliance Industries and Indian Petrochemicals Corporation.

Seventh-generation Zóbel de Ayala took over the Philippines’ largest conglomerate from his father, Jaime, as chairman and chief executive in 2006. Starting as a small distillery, Ayala is now a holding company for Ayala Land, Bank of the Philippine Islands, Globe Telecom, and Manila Water, which posted revenues of PHP242 billion ($4.61 billion) in 2017. Zóbel de Ayala is highly regarded as a leader and has been named best chief executive by Finance Asia and won CNBC’s Asia Business Leader award.

Third-generation siblings Victor and William run Li & Fung, a middleman between Chinese manufacturers and retailers in the US and Europe. Co-founded by their grandfather, Fung Pak-liu in 1906, the business has become one of the world’s largest suppliers of clothes and toys. With $18.3 billion revenue posted in 2015, the company works with some 15,000 factories in over 40 countries. Victor’s son Spencer succeeded as chief executive in 2014, and his other three children also work for the family business.

Godrej chairs the $4.5 billion revenue-generating Godrej Group, a family conglomerate founded by his grandfather Ardeshir Godrej, in 1897. The family business spans real estate, consumer products, industrial engineering, and retail. Under his leadership, Godrej has modernised the management structure and improved process, and now heads the group alongside his brother, managing director of Godrej Industries, Nadir, and his cousin, Godrej & Boyce managing director, Jamshyd. He also acts as president of several Indian trade and industry bodies and associations.

Second-generation Idemitsu heads Japanese oil wholesaler Idemitsu Kosan, with revenues of $32.1 billion. Last year, the family led by Idemitsu, which has a 28% stake in the company, dropped its opposition for a merger with Showa Shell Sekiyu, allowing the two oil firms to combine. The feud over differences in corporate culture was settled under the condition Showa Shell upheld the principles espoused by founder Sazo Idemitsu, along with two board seats reserved for family members at the merged company.

Nicknamed ‘Superman’, Li Ka-Shing is revered as one of the most influential businessmen in Asia, presiding over a diverse portfolio from a wide array of industries, including real estate, transportation and financial services. Forbes Family has previously honoured Li with the first ever Malcolm S Lifetime Achievement award. He now sits as senior adviser for his $21.5 billion revenue (2016) family business after retiring as chairman. His son Victor now heads the conglomerate, which operates in more than 50 nations.

Liu is the founder, chairman, and chief executive of Chinese e-commerce firm JD.com. He opened his first electrical goods store, in 1998 but was forced to move his business online after the SARS outbreak of 2003, which kept staff and clients at home. He has since built his company into an e-commerce behemoth, posting revenues of $67.19 billion in 2018. His focus has been on innovating his delivery methods, developing several models of drones to carry packages to rural villages.

Indian technology magnate Premji’s $8.4 billion company Wipro is India’s third-largest outsourcer. Premji left his studies in 1966 to take over the family’s cooking oil business after his father died, which he then expanded into technology and software. Today, Wipro has an innovation centre in Silicon Valley, which is focused on developing new technologies and collaborating with start-ups. Premji’s son, Rishad, heads strategy and sits on the board, and also chairs industry lobby group NASSCOM. 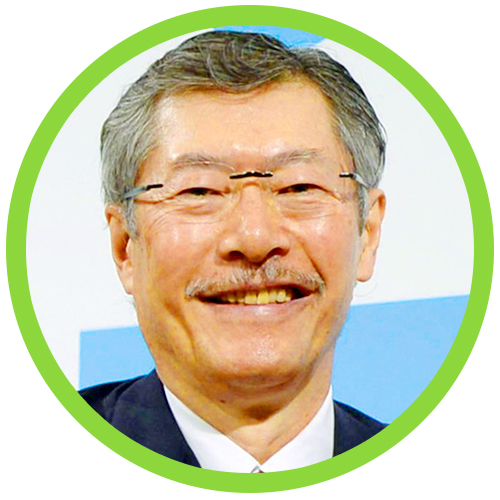 Third-generation Saji is chairman of drinks powerhouse Suntory Holdings, which bought Beam, the supplier of Jim Beam and Maker’s Mark bourbon, for $16 billion in 2014. He is the grandson of founder, Nobuhiro Torii, and took over as president, after his father, Keizo died in 2001. Saji stepped down as president in 2014, handing the company over to a non-family member for the first time. Saji’s nephew Nobuhiro Torji, was promoted to chief operating officer and executive vice president in 2016.

Tata is the head of Tata Group, an Indian multinational conglomerate holding company founded by his grand uncle, Jamsetji Tata, in 1868. He began his career in the Tata Group, working on the shop floor of Tata Steel, and worked his way up to oversee the entire empire by the early 1990s. A skilful dealmaker, he acquired a number of companies, including Tetley, Corus Group, and Jaguar Land Rover. In 2017, he appointed his successor, non-family member Natarajan Chandrasekaran, as chairman.

Tindall founded the Warehouse Group in 1982, which is the largest retail group operating in New Zealand. The $2 billion-revenue group now consists of The Warehouse, Warehouse Stationary, Noel Leeming, and Torpedo7 Group. He is a well-regarded leader, winning accolades including Business Person of the Year for 1997, and was named as a Knight Grand Companion of the New Zealand Order of Merit in 2019. His son Robbie has worked at The Warehouse and is a non-executive director.

White is the third-generation co-leader of the Ray White Group, along with his brother, Paul. Under the sibling duo, it has grown into the largest real estate franchise group in Australasia, with over 1,000 offices around the world. White first joined the business as managing director of the company in 1976, and turned the company into an international real estate powerhouse with sales revenues of $35.3 billion. His son, Dan, is managing director and sits on the board.

Second-generation Yanai built and runs Tokyo-listed retail clothing empire Fast Retailing, parent of the Uniqlo chain. He has single-handedly overseen company operations of the $16.9 billion revenue company, which is now the world’s fourth largest apparel company, with a portfolio of brands, including Helmut Lang, Theory, and J Brand. He became president of his father’s 22-store clothing chain, Unique Clothing Warehouse, and opened his first store in 1984. Last year, Yanai’s two sons, Kazumi and Koji were promoted to company directors.