Switzerland is one of the most stable economies in the world. Analysts say the Swiss economy is set to expand in 2017 and is currently fairly valued. Switzerland is one of the most stable economies in the world.  Analysts say the Swiss economy is set to expand in 2017 and is currently fairly valued. Tanzeel Akhtar reports

The country is known for its neutral political stance, growth economy, strong currency, and low unemployment rate. Not forgetting its highly competitive tax regime. Is Switzerland embarking on another boom phase?

Back in January 2015, the Swiss National Bank (SNB) abandoned its currency cap and let the franc appreciate against the euro. By late 2016, assuming oil prices and exchange rates remain on their assumed trajectories, Swiss inflation could turn positive.

Credit Suisse reports the Swiss economy is set to expand by 1.5% in 2017. Growth is therefore likely to remain weaker than before the appreciation of the franc. UBS economist, Alessandro Bee writes the Swiss economy has been surprisingly strong, forecasting growth at 1.4% for this year.

“Q2’s 0.6% quarterly rise in the GDP was slightly stronger than expected and left the annual growth rate at a six-quarter high of 2%.”

The SNB warned growth would slow in the second half of 2016, partly due to the effects of the Brexit vote on demand from the key export markets of the UK and eurozone. 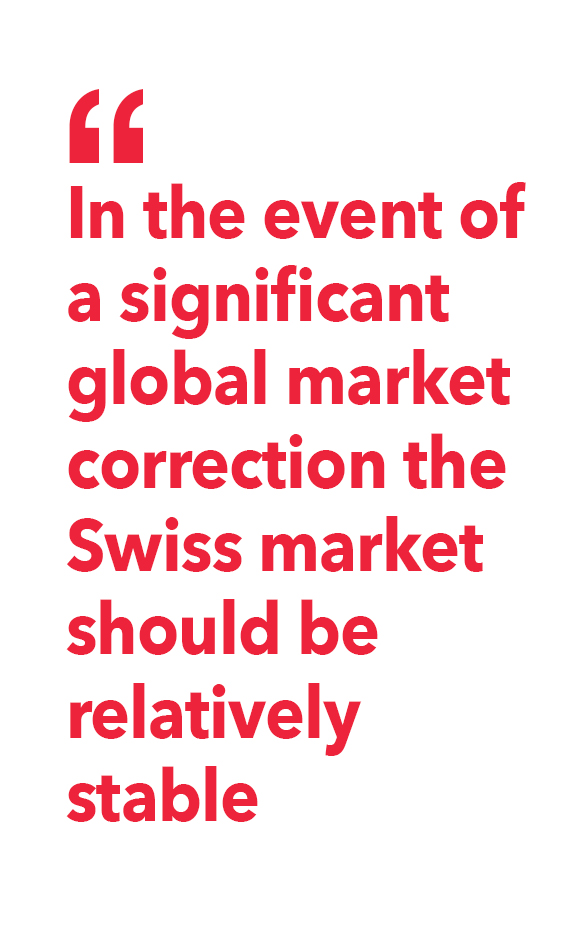 Over the years Swiss equities have been perceived as a safe haven for investors. Henry Croft, a research analyst at Accendo Markets says: “The Swiss equity market has an overweight defensive sector alongside the view of the Swiss franc as a safe-haven asset, meaning that in the event of a significant global market correction the Swiss market should be relatively stable.”

However, Credit Suisse investment strategist Florence Lombardo warns that Swiss equities are not immune to global political and growth risks. Especially since a large share of Swiss companies’ revenue is generated outside of Switzerland, meaning the performance of Swiss equities will largely depend on the level and movement in the franc as well as the eurozone and US growth paths.

“We anticipate a gradual depreciation of the franc in 2017, though the franc should remain over-valued and thus still represents a challenge for Swiss companies,” says Lombardo.

“Dividends are attractive, especially in a context of negative yields in Switzerland. Moreover, the defensive nature of the market is a plus in case of turbulence. While franc appreciation pressure could increase again should investor risk aversion flare up, we would anticipate the SNB to intervene in currency markets to dampen franc strength.”

For the remainder of 2016 and next year there will continue to be considerable uncertainty in the markets as the UK prepares to leave the European Union and the US presidential elections come to a head. Switzerland’s economics minister Johann Schneider-Ammann recently cautioned that the Brexit result affected Switzerland “directly and indirectly, politically and economically”.

Switzerland is not immune to the after-effects of any of these political events.