We deal in first and rare editions, many of them signed and inscribed, from the fifteenth to twentieth-first centuries, in addition to unique handwritten items and original manuscripts. In the past, that’s included a Shakespeare first folio, a 10th-century manuscript section of a Qur’an, and more recently a copy of The Great Gatsbyinscribed by Scott Fitzgerald to a friend he identifies as the original Gatsby.

Are your customers all collectors?

Not at all. Certainly, we source books for major collectors around the world, but some people simply wish to own a first edition of one specific book they’ve always loved, while others are looking for a unique gift. We have been approached for interior design requests and by those buying books as an alternative investment option. We often find that once someone has bought one rare book, they get the bug and come back for more. 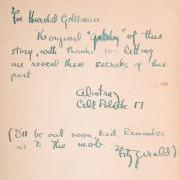 Which authors do you find to be the most collectible?

It’s not hard to list the literary best-sellers – Shakespeare, Dickens, Jane Austen, the Brontë sisters, Lewis Carroll, James Joyce, Virginia Woolf, Ian Fleming, A. A. Milne, Roald Dahl, J. K. Rowling. But as you might imagine there are many sought-after writers within other genres too – rare copies of the works of Ernest Shackleton, Winston Churchill, Maynard Keynes, and Bertrand Russell can command impressive sums.

What makes one copy of a book worth more than another?

First editions of authors’ early works, when they were struggling and undiscovered, are often the hardest to come by, and signed copies even more so. The particularly dazzling items are those that are inscribed to someone known either as an important figure in their own right or someone closely associated with the writing of the book – “books that shouldn’t exist”, you might say. Like our copy of the first edition of Mark Twain’s Huckleberry Finn, inscribed by him to his manager who organised the reading tours where Twain first read the book to public audiences. Alongside the rarity of an item, its condition is also incredibly important – a faded spine can make a real difference to the discerning collector.

Do you have a favourite rare book yourself?

If I had to pick one personal favourite, it might be my copy of Roald Dahl’s Boy, inscribed to his sister. It’s one of my favourite books in the first place but the inscription makes it something truly wonderful.