Sponsored feature: Fancy a double or treble? How to invest in maturing Scotch whisky

The longer it stays in the cask, the tastier that whisky becomes. But do you know how much this 'maturity magic' is worth to the £4 billion Scotch business? Industry veteran Rupert Patrick explains. The longer it stays in the cask, the tastier that whisky becomes. But do you know how much this 'maturity magic' is worth to the £4 billion Scotch business? Industry veteran Rupert Patrick explains.

Can you name a more stable or deeply-moated consumer brand than Scotch whisky?

To earn that name, this mash of water and corn, wheat or malted barley must by UK and European law be distilled and then matured in Scotland for at least three years. It then commands the largest premium of any liquor, selling 4% of global spirits by volume but 12% by value.

Worth £4 billion in 2015, Scotch whisky generates one-quarter of UK food and drink exports. The equivalent of three cases (of 12 bottles each) leave Scotland for overseas markets every second. Over the last 30 years, global sales have grown 1.5% per annum by volume and more than twice that by value. 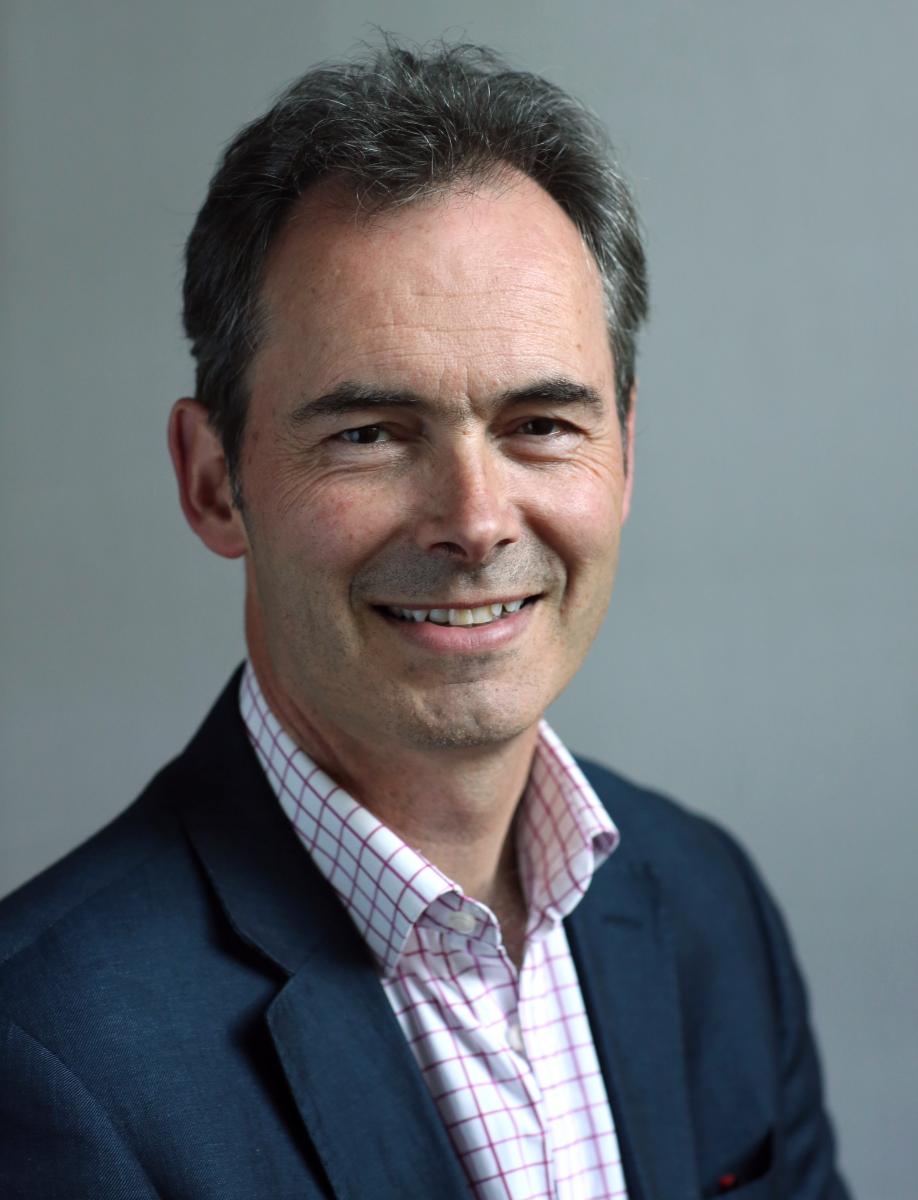 Demand has also deepened as it spreads, with 27 national markets now buying over half-a-million cases each year, up from 14 in 1985. This steady growth has sailed past the subprime collapse in the US (the biggest-spending market for Scotch), the Eurozone crisis (France is Scotch's largest market by volume and second by value) and now the slowdown in China and the resulting crash for its commodity suppliers (drinkers in Brazil have doubled their annual spending on Scotch since 2005).

The unsung work-horse of this remarkable business is blended Scotch. Mixing up to 40 different single malts with 60-70% of a plainer grain whisky, this smoother drink accounts for nine bottles in every 10 sold worldwide.

Demand for blended Scotch took off after Prohibition was repealed during the Great Depression in 1930s' America, but strong branding had already seen today's spirits-industry leader – Johnnie Walker – reach 120 overseas markets by 1920, before Coca-Cola had even crossed the Atlantic.

Wearing its distinctive rectangular bottle and sloping label since 1909, Johnnie Walker's modern editions of red, black, double black, gold and blue now sell around 60 million litres of pure alcohol (LPA, the industry's standard accounting unit) per year. That equals sales of the number 2, 3, 4 and 5 brands combined. Shares in Diageo PLC (LON:DGE) thus offer one way to fortify your portfolio with some of Scotch's long-term stability. The London-listed drinks giant owns other leading blends including J&B (the favourite Scotch in Spain, world No.7 by volume), plus fast-growing single malts such as the Singleton, Talisker and Lagavulin. 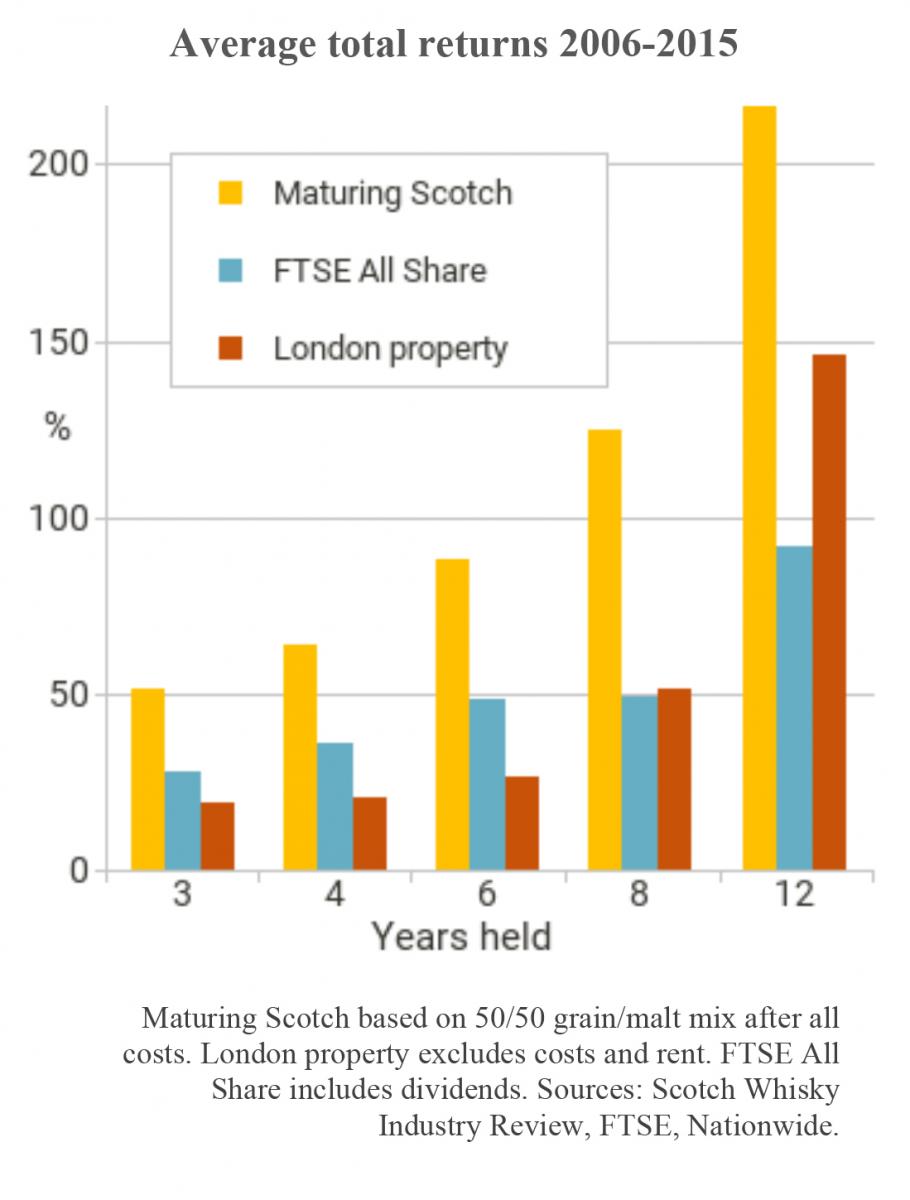 But while French-listed Pernod Ricard (FRA:PER) comes a distant second, and even though Diageo now satisfies more than two-fifths of Scotch demand worldwide, the spirit makes up less than 25% of the company's gross sales. Other spirits combined are greater, while pre-mixed drinks account for 5% and beer a further 17% of DGE's revenues.

Investors wanting a pure play won't in fact find any listed companies dedicated to Scotch, nor to any production of whisky (or whiskey as it's spelt by Irish, Canadian and US distillers). Private equity has recently seen a handful of buy-ins; Exponent bought the Loch Lomond distillery in 2014, and Australian entrepreneur David Prior bought the mothballed Bladnoch facility last July. But there haven't as yet been any notable successes or exits to benchmark returns from investing in production. What's more, the recent boom in smaller start-ups – so-called "craft distilleries" whether in whisky, vodka or gin – has now attracted the majors, with Diageo actively competing with private equity to provide finance through its Distill Ventures programme.

The simplest route to gaining exposure to Scotch's long-term success therefore remains owning the whisky itself. For the true aficionado, that might mean building a collection of rarer whiskies already bottled. Auction sales of single-malt bottles grew 25% by value in the UK in 2015, according to one consultancy. But totalling only £9.6 million, this little boom in so-called "collectible" whiskies remains very small and illiquid, with the vast bulk of sales made through online sites where enthusiasts are looking for whiskies to drink or impress guests, rather than investors seeking price appreciation.

A selection of ultra-premium bottles continue to set price records worldwide, but those headlines are led by a diminishing stock of bottlings from closed distilleries (most famously Japan's now "silent" Karuizawa plant), plus a surge in Hong Kong hammer prices which many in the trade believe is a bubble.

What then of investing in maturing Scotch whisky, still in the barrel? Quietly reacting with the damp Scottish air seeping through its oak cask (usually a one-time Bourbon or sherry barrel), maturing Scotch becomes tastier as it ages, naturally gaining value to whisky drinkers everywhere. That makes longer-aged whisky more valuable to the blenders who need a wide mix of single malts and grain whiskies to produce their world-beating brands. 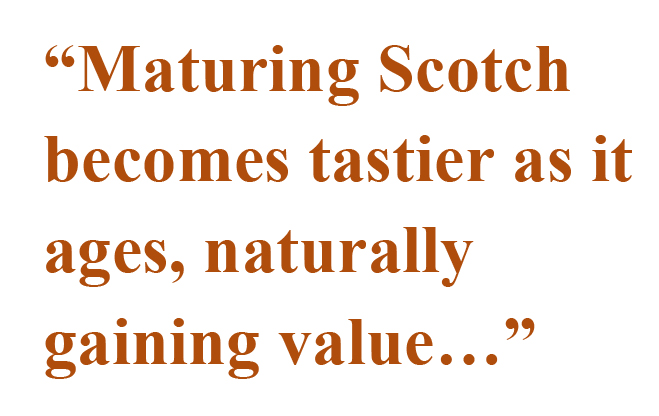 To date, maturing Scotch has been uninvestable. Several smaller distillers run cask-purchase schemes, inviting private individuals to buy a whole barrel of spirit, perhaps with some guarantee of a future buy-back price. But most come with a 10-year or longer lock-in period, and initial pricing – already including all storage fees upfront – sits close to final trade-sale valuations.

WhiskyInvestDirect changes all this, reducing investment costs by about 70% and making a wide range of young spirit available at trade prices. Launched in 2015, and charging insurance and storage fees on a monthly basis – with no lock-in period and guaranteed liquidity of £10,000 per customer per line of stock – it employs the proven trading platform and custody I.T. of BullionVault, the world's largest online gold and silver exchange, now caring for £1.7 billion of client assets. This offers potential benefit not only to private investors and funds, but also to the Scotch industry itself. Because until now, the trade has lacked an electronic broking platform for sourcing mature whisky, needed to create those world-beating blends.

Traded inside bonded warehouses, with no VAT or duty to pay, maturing Scotch whisky consistently grows in value the longer it ages, according to industry data. After accounting for all of the costs you'd pay to use WhiskyInvestDirect, an equal holding of typical malt and grain whiskies would have doubled in value on average over the last decade on selling at 8 years old, and trebled at 12 years old. Past performance is no guarantee of future returns of course, and storage and insurance costs can look steep at around 5% per year on new-make spirit, before it gains any "maturity magic".

Customers of WhiskyInvestDirect already own maturing whisky from six of the top Scotch distillers – Diageo, Beam Suntory, Whyte & Mackay, Glen Turner, Tullibardine and Distell International – supplying the Tobermory and Bunnahabhain. Between them these distillers represent just under half of world Scotch production, and we are actively working to add new stock-lines from other key manufacturers as well. Our customers have so far bought 2 million litres of pure alcohol between them. That may sound a lot, but in fact it represents only a drop in the barrel, with around 3 billion LPA now slowly maturing – and gaining value – in oak barrels held in Scottish warehouses in total.

To learn more about investing in whisky, and to register for a free account already holding a little maturing Scotch for you today, go to WhiskyInvestDirect.com.

Note: Previous price trends are no guarantee of future movements. Whisky, a physical commodity, is not an investment within the terms and scope of the Financial Services and Markets Act 2000. Seek independent advice if you're unsure of the suitability of any investment. WhiskyInvestDirect Ltd, Landmark House, Blacks Road, London W6 9DP, United Kingdom. Registered in England and Wales: 09068458

FB Roundup: Oppenheimer Generations, Fortescue Metals Group, The Ford Foundation
How family investors are putting their wealth to work against global challenges
Keeping it in the family: Why proactive succession is on the rise
Emerging stronger as a successor: Gain wisdom from your family, family business and trusted advisers
How next generation talents can master family business leadership