Eleventh generation Marc de Kuyper is in line to take over as head of the world’s biggest distiller, but he’s having to work hard to get the top job, discovers CampdenNXG. The scents of juniper, cloves, liquorice and dried orange fill the air in the infusing shed at the De Kuyper headquarters in Schiedam, a small town just outside Rotterdam. Huge glazed pottery jars line the walls, emblazoned with the Dutch names of the products that are maturing inside them: gember, anijszaad, koriander (pictured below). Antique copper distilling equipment sits around. Hatches on the floor cover massive tanks in which flavours are being slowly infused into alcohol, ready to be exported all over the world. But it’s the smell that you remember; a mixture of the medicinal and the sweet, like an apothecary run by Willy Wonka.

“I grew up with that smell,” says Marc de Kuyper, the 11th generation of his family to work in the distilling business. “I used to come here in the school holidays and do all the jobs that nobody else wanted to do: unpacking boxes, cleaning floors, the menial jobs.”

Marc de Kuyper might have been coming here his whole life, but his family has been in this spot since 1911, and in Schiedam since 1893 when it, along with other distillers, was thrown out of Rotterdam. “Making malt wine is a smelly business, they wanted us downwind,” jokes De Kuyper. The business itself dates back to at least 1695, when Petrus de Kuyper registered as a barrel-maker at Horst, in the south of the Netherlands. The family name means “cooper” – barrel-maker – which suggests that they’d been in the business even earlier. Indeed, the family is certain that it goes back further but as there are no records they don’t like to shout about it. Having “1695” on the bottles is impressive enough, anyway.

Tradition is important to the company. The first two granaries that it bought way back in the 18th century were called the Heart and the Anchor and the company logo of an anchor inside a heart is emblazoned all over the factory, frosted on windows and set in stone above the front door. But De Kuyper is not stuck in the past. It sells 60 million bottles of spirits annually in 130 countries, making it the world’s largest distiller of cordials.

The majority of the business is in mass market cocktail spirits, brightly- coloured cherry brandy, blue curaçao and crème de menthe in brash bottles that appeal to younger drinkers. But there is also an ultra-premium portfolio that includes Peachtree and it has recently started selling products made by the Rutte microdistillery in Holland that makes innovative jenevers – including a seaweed-flavoured one.

Marc, 33, is the oldest member of his generation and is tipped to become chief executive – but insists that it’s not a done deal. Looking casual and relaxed in a blue-and-white striped shirt, and jeans, and sitting in a nightclub-style room in the Schiedam headquarters where barmen are flown from around the world and taught cocktail-mixing, he explains that when his father retired two years ago he went through a selection process that consisted of nine interviews. At the end, the company’s supervisory board created a five-year plan for him; successfully establish an American business subsidiary for the high-end product portfolio, starting with Mandarine Napoleon liqueur (pictured, left). “I have to make a success in the US according to the criteria we have set,” he explains. “That’s not necessarily success in terms of volume, but that there is a healthy organisation that has an independent sales and marketing team, that the foundation of a business is there.”

So far things seem to be going well and Mandarine Napoleon is being distributed in 49 states, mostly in Miami where Marc is based, and New York. He has also been lucky, in that a product called Chocovine – a chocolate liqueur whose label features a windmill and a dyke – has become an unexpected hit, selling a million bottles a year.

But whatever happens in the US, Marc probably won’t be CEO in 2015. “Our company is currently headed by Ben van Doesburgh, who worked with Procter & Gamble, Mattel and Maxxium. Ben has been appointed for an initial five-year term,” he says. “This is the fourth generation in which we have had external management while we are making the succession transition. The supervisory board might ask him to extend his term here, or find somebody else.

“I’ve told the family that I probably don’t want to take over from him straight away. Firstly, I might like to have the option to stay in the US for longer; secondly, I might want to work more in the Dutch organisation in other positions before heading the company; and thirdly, if I get that position at the age of 36 there’s not a lot of progression.” And anyway, he’s not wedded to the job: “I am not doing it for the status,” he shrugs, “I want a challenging position. If a younger cousin turns out to be very successful and is prepared to lead our company, then fine.”

But hearing him talk it’s hard to believe he’d want to work anywhere else than in the family business (pictured right, a vintage ad in the De Kuyper office). Following the economic turbulence of recent years some have come to question whether the glory days of the publicly owned, joint-stock company are over and that alternative structures such as family businesses are going to come back into fashion.

He agrees. “I would dare to put it more strongly,” he says leaning forward, his Ray-Ban Aviators folded on the arm of his chair. “I think that Europe is going to be saved by privately owned companies, because they are the only ones that think long term and make the right decisions to provide the continuity that we need. I’ve worked for a bank and other publicly owned companies so I’ve seen how results are managed on a quarterly basis. It’s not a recipe for growth. We are investing heavily in the US knowing that in seven years we maybe will make profit, it’s a long-term vision.”

European governments trying to cut their way out of recession could also learn from this model, he thinks. “Governments should design a five-year plan with milestones and not just make budget cuts tomorrow. You need to invest and allow businesses to invest.” His father, Bob, is a regular in the Dutch media talking about economics and business. The suggestion is that other countries ought to pay more attention to successful family business owners.

He thinks that governments should be doing more to help family businesses. Succession taxes, he says, are currently “ridiculous” at 30%. “I want to take over my dad’s shares, and they don’t have a value,” he says. “Our business is not based on corporate value, and we don’t sell our shares to the next generation, we give them.” Lobbying in Brussels to end this absurdity is going well, he thinks.

Another problem for family firms is financing. “The government could help by providing security for banks to loan to family businesses. Traditionally they assessed family business as risky, they thought that they are unstable because there are emotions involved. Plus they source managers from within the family, so they don’t employ the best. But those features that were considered a risk before should be considered an asset now, and in the future. Some banks are getting there, and I think it would be a good thing if the government fostered family businesses and provided security to banks to provide us with financing.”

Marc’s brother Remy is about to start working in the business too – he is a technical engineer who has been working at Sara Lee, but the week after we spoke he was going to start a five-year traineeship to take over from the current director of the main De Kuyper factory, who is preparing for retirement. And why not? It’s not every company that is the subject of a Harvard Business School case study. 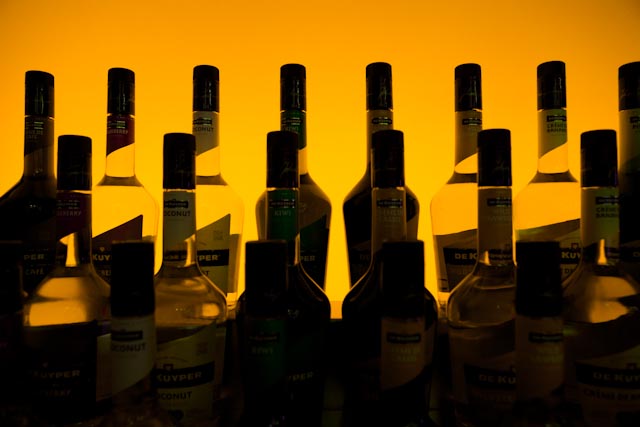 So, how does a family business make it to the 11th generation? Keeping things centralised probably helps: De Kuyper’s shares are owned by just 13 people, after Marc’s grandfather bought back 93% of the shares. Consolidation traditionally takes place every three generations. In terms of strategy, Marc says that the business concentrates on its own niche and innovates within it. New products include sour rhubarb, sour grapefruit and vanilla-flavoured drinks to cater for evolving tastes. But De Kuyper would never try to take on the giant household-name vodka, rum or tequila brands.

Perhaps a little bit of romance helps too. Most production has been moved away from the old headquarters now. There’s no business reason why the infusion process has to stay there. But it does mean that almost every bottle of De Kuyper sprits contains a product that started life in that perfumed hall. Wherever in the world De Kuyper drinks are downed, a little bit of that Schiedam magic is in them all. Willy Wonka would be proud.

Born: 1978
Lives: Miami, with his wife Viviane
Job title: President of the US office of De Kuyper
Education: RSM, Harvard, IMD, Insead
Work history: Started an internet business while studying computer science and business administration, which he sold in 2005. Worked at Verizon, then as a private business team manager at ABN AMRO, group account manager at Westland Cheese and group brand manager at Bickery Food Group. Joined De Kuyper in 2010.