Angus Thirlwell, co-founder of Hotel Chocolat, reckons watching his father do business gave him a taste for entrepreneurship. He talks to CampdenFB about risks, chocolate and not following family expectations. Watching my dad do business gave me a taste for entrepreneurship. When I was a boy, my dad [Edwin Thirlwell, founder of ice cream company Mr Whippy and printing business Prontaprint] had this exciting life, always heading off to exotic places and coming back from exotic places, and I thought the life of an entrepreneur was going to be exciting. But I didn’t grow up thinking I’d start my own business – I didn’t really know what I wanted to do at all. It was definitely serendipity rather than a life plan or anything like that, or something articulated, that led me down this path.

I learned how to fail and take risks from working with my dad. During summer holidays and university I worked in dad’s business at various levels. He gave me a lot of responsibility and it was quite stretching. I remember once, when dad had the franchise for Prontaprint in France, he had trouble with the franchisees there, and asked me to go there and deliver a speech he’d written to this throng of disgruntled franchisees, all in French. There was quite a bit of angst and aggro flying round the room and I had to deliver this huge speech in French: it seemed to go down OK and dad seemed pleased. He bought me a suit as a thank-you. There were many things like that, but I soon realised me and him together wasn’t going to work, because I discovered he was more risk-averse than I had expected. When I later sought his advice on my own businesses, he would always advise me the least risky route. I found that frustrating. Now I can see it was borne of a wish to protect me and make sure I didn’t mess up, but at the time, while I listened to his advice, I didn’t take it very often.

Entrepreneurship means making hard decisions quickly. When you’re starting a business from scratch, the first year is really just about surviving, and I remember two quite awful things I had to do in that period: letting someone go from the business on Christmas Eve, and having to talk to a pregnant lady about leaving the business. I don’t like having to let people go, but I realise it’s a very cathartic process for both sides quite often. It’s about acting – doing it sooner rather than later. If someone isn’t working out, have the proper conversation with them at the right time. If they have to leave the business, then so be it – it doesn’t mean you have to fall out.

My business partner is the guy who recruited me in another job. I met Peter [Harris, Hotel Chocolat’s co-founder] in 1986 – actually, he recruited me into a high-tech company in Cambridge. I was in charge of international marketing and Peter was commercial director. We worked together for 10 months, did lots of trips together, which was enough time to persuade him that high-tech wasn’t the way and that we should look at something else. We had talked about a lot of ideas and that was enough to make Peter want to leave, throwing over the shares he had in that business for a new adventure.

The simplest idea can lead to inventing an entirely new market. Our first business was selling branded peppermints. We thought pens were a bit boring and you couldn’t represent company logos very well on them: this was 1987, so it was usually just a gold stamp on a cheap Biro or something. We knew peppermints were clean, they were refreshing, they had a lovely label you could do just about anything with... you can see I’m sliding back into my old sales pitch. We stopped doing those only recently – there are some me-too competitors out there now, but there’s no doubt that when we started it we were the originals, the people who made that market. 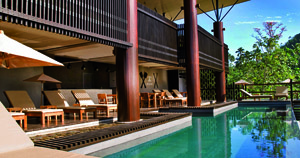 Don’t underestimate the value your folks can bring to your own business. I made my dad chairman of the Boucan, our cocoa plantation, hotel, spa and restaurant in St Lucia. After he sold Mr Whippy, he became chairman of the Barbados Ice Cream Company. He’s been pivotal in getting us some local expertise, because Hotel Chocolat is new to doing business in the West Indies and the Caribbean, and he isn’t. Our country head, Phil Buckley, really values having him there to talk to, to think about problems with. And there’s a different dynamic. He’s still my dad, but he is stepping outside the father-son role, so there’s a different relationship we’ve adopted where we share business ideas and opportunities, particularly with regard to our business model in St Lucia. Probably the proudest moment of my life was when Prince Charles visited the Boucan. I had the great pleasure of seeing my father show Prince Charles around and see how happy my dad was.

There’s something in the genes that led me to this business. My father’s mother had a small chain of cake shops in the north of England, and then my dad went on to do ice cream, and I’ve done mints and chocolate. When I was a boy, rather embarrassingly, my dad knew the names of all the cakes - “can I have two of those Elephant Feet” or “one of those Rothbury Eclairs” – I always found it totally cringe-worthy. 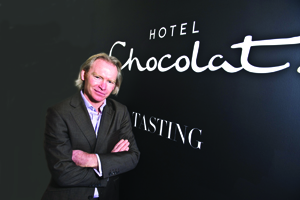 Build a business to grow with your other ideas and interests. There are always other things I’d like to do, but the great thing about Hotel Chocolat is that it continues to evolve; we now have a hotel, a restaurant, we’re farming, and we’re operating among other cultures and in other parts of the world. So there are loads and loads of stimulating experiences I see ahead of me, and all the things I’m interested in have evolved out of my love of cocoa. So through the brand and a cocoa-centric approach to things, it’s been amazing to find the different areas we’ve been able to move into.

Don’t follow family expectations. In Britain, it’s now quite unusual to look at succession through genes, which I think brings inheritors the opportunity to express what they can and want to do themselves. But I understand why people can find coming from a business family background a burden. It’s easy in that situation to avoid making decisions, to sleepwalk into something, make no decisions of your own, and then feel resigned that you’re not the architect of the situation anyway. That’s complete rubbish: it comes from not making decisions when you know you should make one.