Hospitality is second nature to Lydia Forte, the award-winning hotel heiress who is taking her family business into the 21st century, as she explains to James Beech Only 24 hours before Lydia Forte graciously accepted the CampdenFB Top Family Business Rising Star award on stage at the European Families in Business Awards in Madrid, she had put the finishing touches to her family’s new £3 million ($3.9 million) refurbishment in Edinburgh.

“I was at our Balmoral Hotel (pictured) where we had the first day of opening to the public of our new restaurant, which has been a long time in the making,” explains Forte, the group director of food and beverage at Rocco Forte Hotels.

“It is a collaboration with Alain Roux, and his father Michel Roux, to do a brasserie for us using authentic Scottish produce there.”

The restaurant was reinvigorated by hip interior designer Martin Brudnizki and Olga Polizzi, Rocco Forte Hotels’ director of design and Lydia’s aunt. The opening heralded the completion of the family’s five year refurbishment of the five-star hotel.

“It was very exciting to see the Balmoral finally transformed, it was a huge refurbishment at work so I had to be there for the first day,” she says. 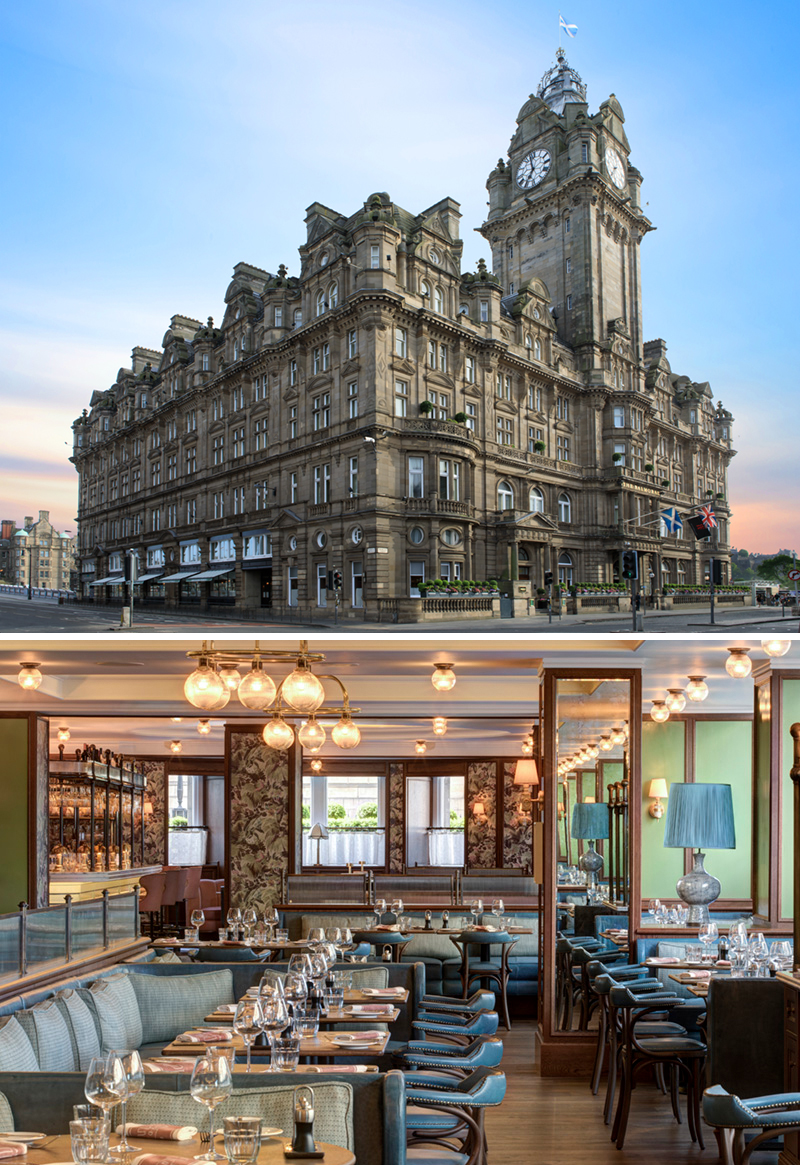 Just as there is the historic Auld Alliance between Scotland and France, the Forte family have a generational connection to the highlands north of the Scottish border.

Her great grandfather came to the United Kingdom from a tiny village just south of Rome in 1912 with her grandfather Charles, born Carmine, who was then three-years-old.

“They settled in Scotland and, like many other Italian immigrants to the UK, they ended up in restaurants and catering with delicatessens, cafes or ice cream shops,” Forte says.

“My grandfather started in that same way. He worked in his father’s café in Weston-Super-Mare and then he became the manager at 21 of the Venetian lounge in Brighton, which was owned by one of his cousins.

“That was his first big experience of hospitality. From there he grew a very different type of business to what we have today, starting with a milk bar on Regent Street, which he opened at 26, and then adding motorway service stations, Little Chefs, catering and hotels all along the way,” she recalls.

The Forte portfolio expanded to more than 800 hotels and had a wide range within, from Travelodges and airport hotels to the luxury Hotel George V in Paris and the Grosvenor House in London.

“My father grew up very much in that business, his first job was aged 14 in the wine cellars of the Café Royal,” Forte says. 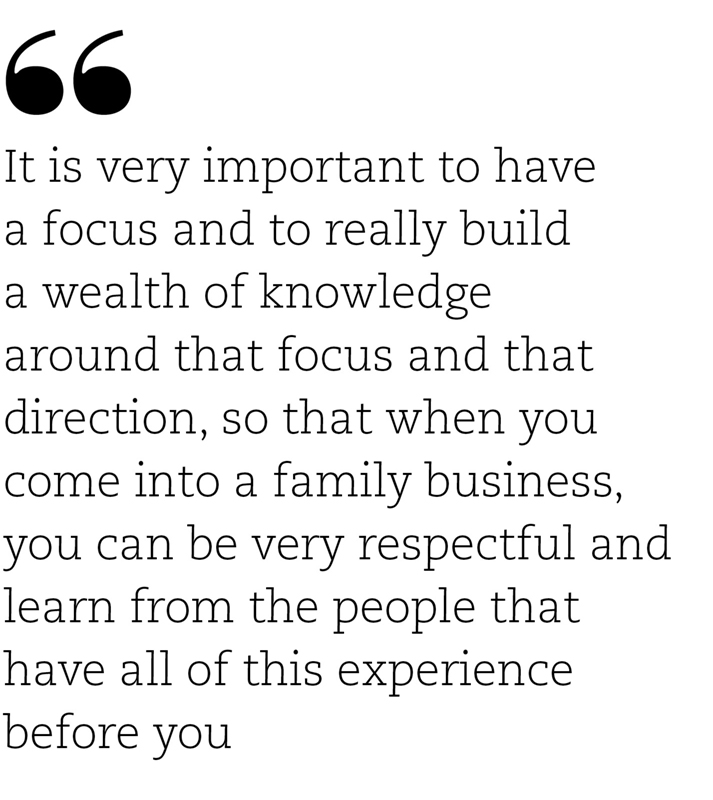 Lydia says while Forte Group became a large public company, her father and grandfather possessed a small number of shares at its peak. The family faced a hostile and traumatic takeover bid from entertainment giant Granada in 1995.

“That experience very much informed what he has built now, which is something much more focused on luxury. This is an area where he had an edge because he knew about it and understood the customer. Much smaller and fully owned, he was really anxious not to give too much of it away.”

The family’s second act is Rocco Forte Hotels, a group of 11 luxury hotels including Brown’s in London, the Balmoral in Edinburgh, and the Astoria in St Petersburg. It has properties in Italy, Germany, Belgium, and Saudi Arabia, in addition to three new hotels in Rome, Puglia, and Shanghai to open in 2019. 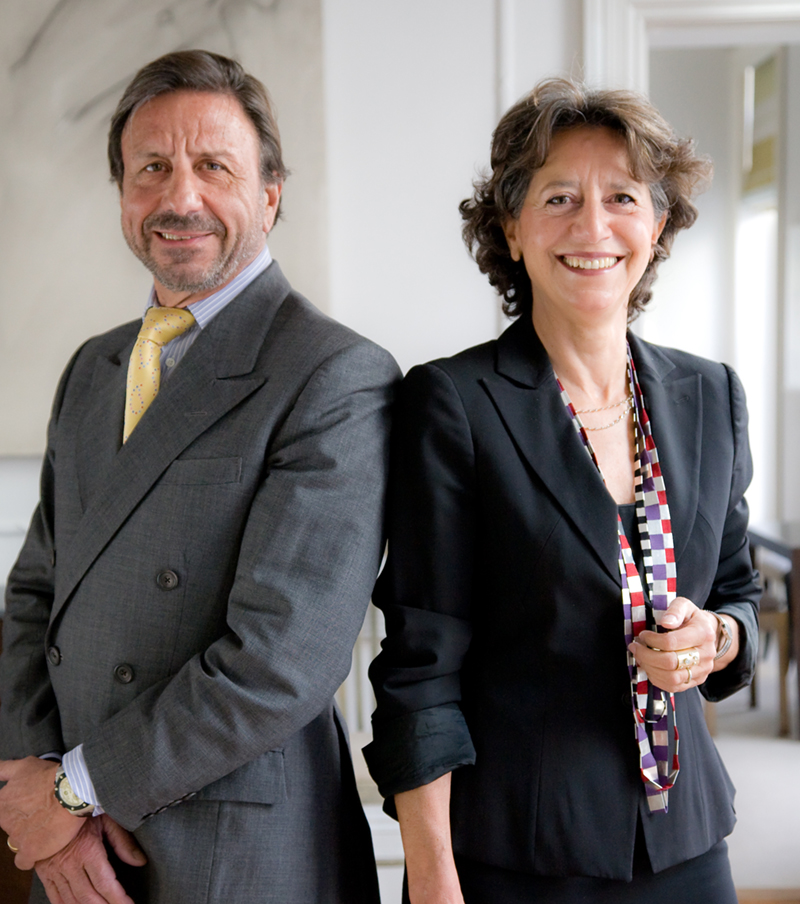 Lydia’s Bournemouth-born and Oxford-educated father, now Sir Rocco Forte (73), is group chairman. Her aunt Olga (72, pictuired with Sir Rocco) is deputy chairwoman and director of design, while managing two boutique hotels of her own, the Endsleigh in Devon and Tresanton in Cornwall.

“I think it is part of the strength of the business that everyone has their own perspective and, with being close family, you are not afraid to voice those perspectives,” Lydia says.

“Everyone has a different idea. [There are] different generations, boys, girls, different passions and interests. It makes for lively debate.”

Lydia’s younger sister Irene (pictured) is group project manager and responsible for spas and also training and development. Their younger brother Charles started two years ago and is working in the development team. 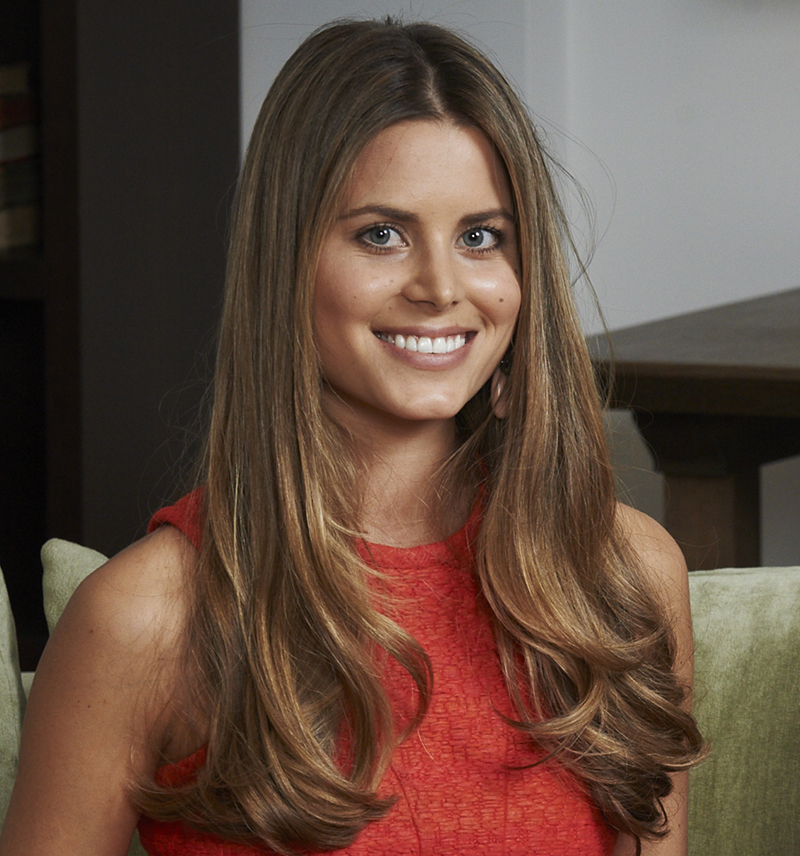 “It was a given that me and my brother and my sister would appreciate and respect hospitality and the value of the industry because it is something we grew up with and heard about over Sunday lunches at my grandfather’s house,” Lydia says.

“I grew up with stories of people who had worked for my grandfather or had stayed in one of his hotels. And even though I was quite young when he passed away, I still had a very strong sense of what he had given and done and that was something that was really instilled in us.

“My father was really clever not to push any of us into it. He just let us get on with our own thing and so I went into restaurants because it is something that interested me after university.”

After school, Lydia completed a professional cookery course at Leith’s, a four-month rotating internship at the Astoria, and spent time in sales and marketing at Brown’s. While studying modern history at Oxford University, Lydia trained as a maître d’hôtel at the Wolseley café-restaurant in London. In 2010, she worked as a waitress at HIX Soho restaurant. She worked her way up, without colleagues paying much attention to her surname, through front of house operations in the restaurant industry, completing tenures in restaurant accounting and reservations.

The multi-lingual next-generation hotelier then completed an MBA at INSEAD in 2013. Before starting work for Rocco Forte Hotels full-time in 2014, Lydia managed a new restaurant opening in Chelsea, the Markham Inn, and led projects to update and improve two restaurants—HIX Mayfair in London and Bocconi in Brussels. 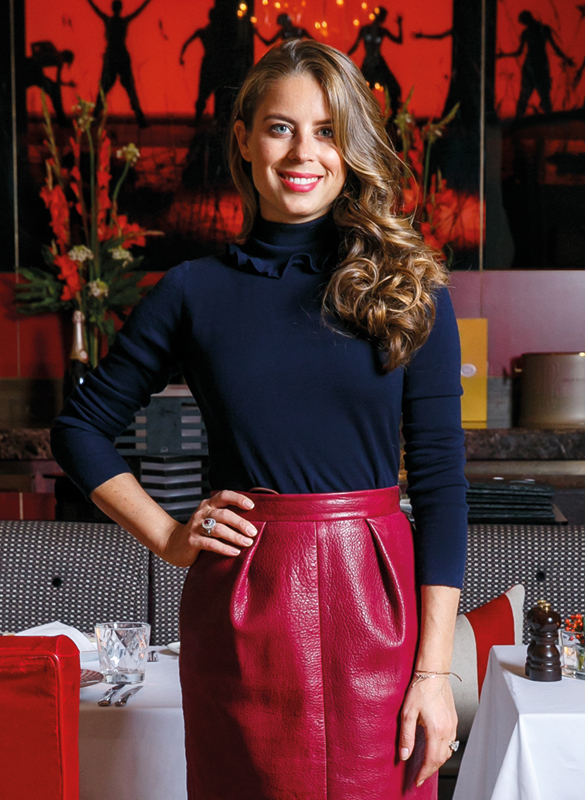 Forte’s advice to the next generation contemplating a move into the family business is to gain experience outside and not to worry about the time taken to do so.

“It is very important to have a focus and to really build a wealth of knowledge around that focus and that direction, so that when you come into a family business, you can be very respectful and learn from the people that have all of this experience before you.

“But also be confident about the small area that you know and to be able to put your stamp in that space without treading on anyone’s toes, without causing conflict.”

Room with a view

Her role as group director of food and beverage (F&B) at RF Hotels means she is responsible for the concepts, management, and performance of the group’s restaurants and bars. This includes developing new restaurant concepts and maintaining quality of food and service. It also involves responsibility for profits, including cost control, and driving of sales.

F&B across the group accounts for as much as 35% of revenue in each hotel, making it a key part of the business. Under her leadership, RF Hotels has seen 15% year-on-year revenue growth.

Her efforts have also received industry recognition with Rocco Forte Nourish, a healthy eating project, nominated for a Catey Award, in addition to the coveted CampdenFB award. 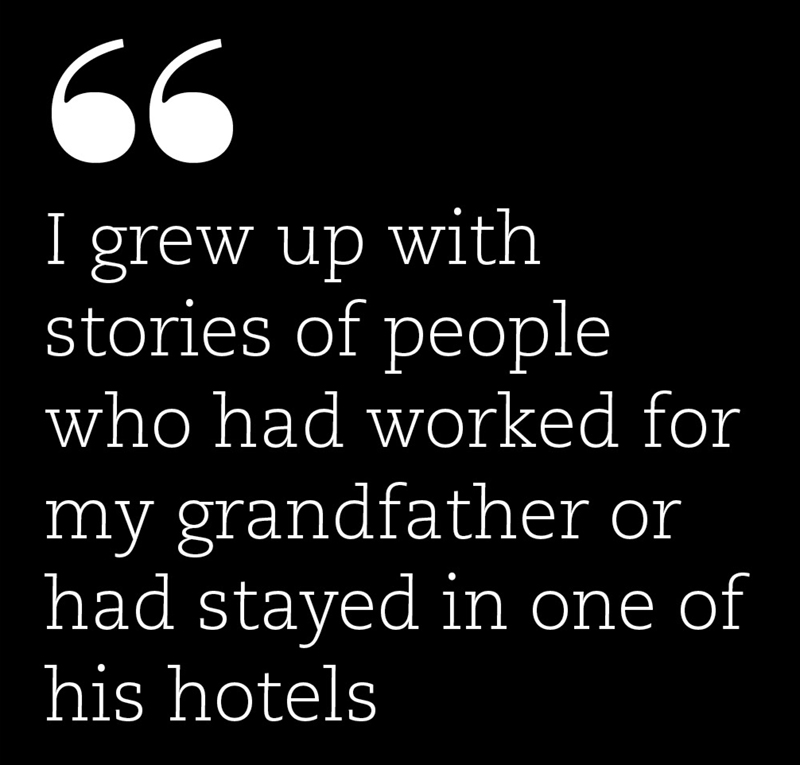 “The first thing that I did when I came into the business was try and change the approach of our restaurants and bars, from hotel guest-focused to local market-focused. The reality is that today’s customer and guest is actually much more curious,” she says.

“They have much more means at their disposal to find what they want to do; where they want to eat; where they want to go. And they will not stay in a hotel unless your hotel offering is competitive in the local market and something that stands out. Coming from an independent restaurant background, it was very much the perspective that I tried to bring in.”

She has ambitions to tap the luxury market and build the Rocco Forte Hotels brand in Asia, starting with the opening of the family’s towering new luxury property in Shanghai next year. The Westbund Hotel (pictured) is designed by her aunt, Olga, and Inge Moore and boasts 219 rooms up 52-stories. It is expected to open in summer 2019.

“Asia is a market that we have been dying to get into. Our first hotel in Asia in Shanghai is a newly developed area where the old airport used to be.

“That was a new build from scratch. We are really excited, not only because Shanghai is a great city, but also because it is great fun to go out there and to learn about that region, the tastes and everything else.” 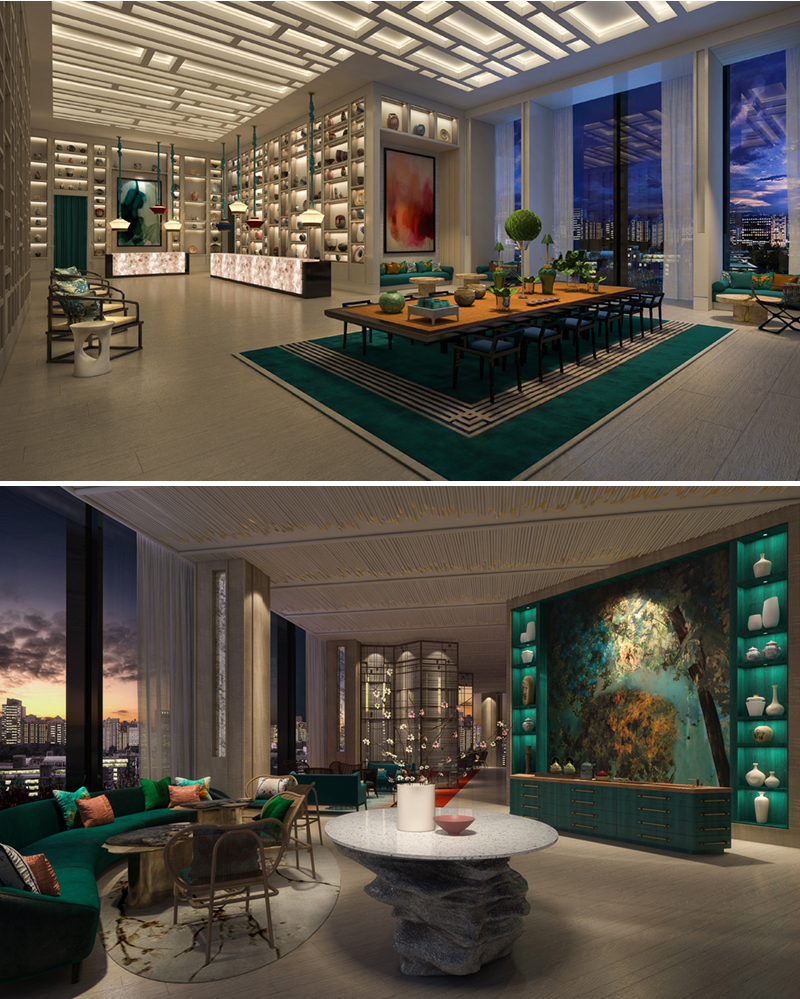 While many family business leaders tend to shy away from the public eye, the next generation often embrace the media and social media as part of their personal and professional brand. Lydia is no exception.

She was the toughest investor for budding restaurateurs to impress in the BBC TV programme Million Pound Menu in 2018. She was the only investor in the episode who voiced concerns about the authenticity of the Cuban pop-up eatery that was pitched to the panel and she ultimately opted out of investing.

More than 21,000 followers on Instagram admire pictures of Lydia’s stylish lifestyle in exotic locations. She posted celebratory images from Princess Eugenie’s wedding to Jack Brooksbank in October that she and Irene attended. Lydia also announced her pregnancy on Instagram—the next generation’s next generation.

“Well I am lucky that I am not very famous, not an actress, but I think it’s important, and my father has done it very well, to focus the press and the narrative on the story that you want to tell,” she says.

One advantage of multigenerational family businesses is one can explore different avenues to find their passion. Is there anywhere Lydia Forte wants to be in 10 years’ time?

“At the moment I am just trying to make our F&B offering world renowned for hotels and I am really enjoying what I do,” she responds.

“There is just so much to do and so much growth to be done, and so much to change. So far we are working very well together so I think we will just see how it goes. [Let us] see how we feel in 10 years’ time.”