The remarkable return of MV Agusta It would be an exaggeration to say that Giovanni Castiglioni was born riding a motorbike, but only just. He got his first pushbike at the age of two and his first engine-powered bike when he was four. Now aged just 33, he is the CEO of MV Agusta, a legendary racing marque which he has turned from a moribund relic into a thriving concern. Just 18 months after his family re-took control of the business, sales have increased by 300% and are on an upward trend. Many have tried to revive MV Agusta, and all have failed – including Harley Davidson and Giovanni’s father Claudio. Many thought it was a poisoned chalice. But now it is winning a whole new generation of fans, and when Castiglioni talks about an IPO that would rival Ducati’s, he is taken seriously. How did he do it? And why?

The Castiglioni/MV Agusta love story is a long one (see box) but the latest chapter began in 2010, when Giovanni’s father Claudio bought the brand from Harley Davidson. It was, astonishingly, the third time in 20 years that the family had bought the business. On neither of the previous occasions had they managed to make a success of it. At the time of the latest purchase it was said that Claudio Castiglioni had bought it for €3 – “the price of a latte”, as one motorcycle journalist put it. It was not quite right: the even more astonishing truth is that Harley were so keen to offload the ailing brand that they paid Claudio €26 million to take it off their hands. 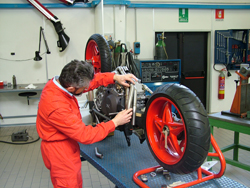 Why, if they had failed to make it work twice before, did the Castiglionis buy the brand again? Partly, because MV is an icon and because Claudio had already revived other great marques – including Ducati – before. Partly because the deal was good – they acquired it with no debt and a very nice sweetener – and partly because a superb new engine was half-way through development. And then there were the sentimental reasons. “The decision was 90% emotional,” says Giovanni, speaking from his office in the family’s factory in Varese. “The emotional side certainly got the upper hand over the rational.” It is hard to escape the conclusion that it was also to leave a legacy. Claudio Castiglioni had terminal cancer when he bought back MV Agusta, and he died soon after, leaving his son to deal with the titanic task of turning it round.

There couldn’t be better choice of a new CEO. Giovanni clearly has motorcycling in his blood. “I used to come to the factory every Saturday with my father so I was really involved since I was a kid,” he says. “It was part of my life.” Aged 18 he started working a little for his father. “I think I was a good secretary,” he jokes. When he graduated aged 22 he started working in the business full-time and had been made CEO before Claudio died. (Even though Harley owned it, they kept on the Castiglionis to run the business day-to-day.). A smart and taciturn man, who sometimes seems even younger than his years, he is widely seen as a cooler head than his father, who was known to be a mercurial risk-taker who made brilliant coups and horrible mistakes. In a sense, this is the classic family business story of a swashbuckling, entrepreneurial father and the more sensible next generation leader consolidating the empire. 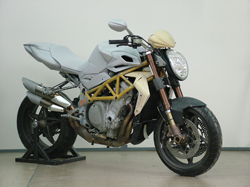 In fact there was more than sentiment in the purchase of MV Agusta. There was a plan. And a good one. Claudio had not only bought the business for a knock-down price, but he had also persuaded Massimo Bordi, the engineer who turned around Ducati in the 1990s and who had been working as CEO of tractor company SAME Deutz-Fahr, to come on board. It turns out that Giovanni – who had been head of marketing and sales before becoming CEO – and the visionary engineer Bordi are a dream team. Putting them together was Claudio Castiglioni’s last coup.

The business plan developed by the two Castiglionis and Bordi was to move MV Agusta out of the shrinking high-end market and into the larger mid-market. That meant making bikes with 600 and 800cc engines, rather than the 1,000cc-plus monsters of the past. The challenge was doing that without losing the things that make MV Agusta special. Because this is a brand whose racing history makes motorcyclists go misty-eyed.

Benoit Leleux, a professor at IMD business school and a keen biker, explains: “It is a strange brand, it has a mystique that extends way beyond its actual achievements.” It is, he says, the Ferrari of the motorcycle world, and although Agusta bikes last took the checkered flag way back in the 1970s, the aura of its awesome racing success clings to the name. The renaissance of the brand is, says Leleux, “interesting from a marketing standpoint. How do you take a luxury brand and take it a little bit downstream without antagonising the exclusivity and luxury component? You have to do it so you don’t destroy the prestige of the brand.”

So far, Castiglioni and Bordi have been successful – very successful. The plan to move MV Agusta into the mid-market was the right one, but two other elements made it work. Firstly, the engineering. To sell, MV Agusta bikes have to live up to their racing heritage. That is about ensuring the engines have the right MV roar (enthusiasts can distinguish a Harley, a Ducati or an MV Agusta by the characteristic sound of their engines) and the engineering that aficionados expect. This was possible because both Bordi and the Castiglioni family – who own a series of foundries and metal-working businesses in the region (see box) – are embedded in the engineering heritage of northern Italy. Manufacturers such as family-owned motor engineering firm Brembo make parts for brands like Maserati, Ferrari, Lamborghini and Ducati. The Castiglionis and Bordi know everyone; building great vehicles is their bread and butter.

It also helped that the new, smaller three-cylinder engines were in development, meaning that Castiglioni and Bordi were well on the road to creating a new range of smaller bikes. But – and this is the tricky part – they had to do all this while making the bikes cheaper, in the €8-9,000 range. That means compromise, which does not sit well with the MV Agusta brand. Traditionally, says Leleux, MV Agusta’s engineers “would rather die than have a plastic part. Everything was aluminium, the alloys were absolutely fantastic.” With the new bikes, though, the new owners have taken the plunge. “It’s like a Ferrari with plastic seats,” says Leleux.

How have the purists reacted? This brings us to the second element that has made Agusta a success, and to Giovanni’s contribution: brilliant marketing. The new MV Agusta’s marketing and advertising has very successfully played on the racing heritage, so much so that bike-lovers have been willing to overlook that sacrilegious plastic for the vicarious thrill of the race. (The fact that the new engines are three-cylinder efforts, as were the classic racing engines, has helped.) “They were able to capture the imagination of the obsessive motorcycle riders,” says Leleux. When Claudio died some in the industry were unsure what Giovanni could bring to the table. But it has turned out that his marketing nous was invaluable.

So far things have gone to plan. “We tripled our sales and I think that we can make another step forward and reach 10,000 units a year, which is a good number for a high-end motorcycle company,” says Giovanni. And the brand is also now appealing to a bigger, and a more lucrative, demographic. In the 1990s MV Agusta customers were people who remembered its racing glory years, says Giovanni, “nostalgics aged 40 to 50. But now we have clients from 18 years old, and an average of 30-35. But we have everyone, from the real passionate ones who save money for 20 years to buy one of our bikes, to the trend-setters.” Brad Pitt is said to own one of the new bikes, which has certainly helped.

Can this success continue? A turnaround is one thing, but creating a sustainable luxury brand, balancing exclusivity and accessibility, is another. “The positioning was very delicate and clever,” says Leleux. “So far so good.” So what’s next? Giovanni says that he would like to have an IPO. It’s certainly possible, thinks Leleux. They would probably need to be shifting 20-25,000 bikes a year and have a turnover of €150 million, he thinks. The real question is: what is success for Giovanni Castiglioni?

Perhaps the clue is in the way he talks about the brand. An MV Agusta bike is, he says, “a product that transfers emotion to our clients. They buy our product mostly because it’s a dream, something you want to do in your free time, it’s a passion.” For the engineering families in north Italy, owning a motorcycle brand is the ultimate status symbol, Leleux points out. This business is not core to the Castiglionis’ wealth. It is a side-line – a trophy. “If you are passionate about motorsports like I am there is nothing better than working in a high-end motorcycle company,” Giovanni says.

This is a dream for him too. But he is in it for the long-run; he adds that he would like his children to be able to continue the business. The Castiglionis have learned well from the mistakes of the past, and as long as it breaks even, MV Agusta’s future at last looks secure. And with it, Claudio Castiglioni’s legacy.

MV Agusta: Glory and good business
In 1945 Domenico and Vinzenzo Agusta turned the family’s aeronautical engineering firm into a motorcycle one: MV Agusta. Domenico went into racing, believing it was the best way to boost the brand’s visibility. During its racing years MV Agusta won over 3,000 races, taking 38 racers’ titles. When Domenico died in 1971 the firm went into decline and production ceased in the early 1980s.

In 1991 Claudio Castiglioni’s Cagiva company bought the MV Agusta brand and sold bikes under the name. In 2005 Claudio sold 57.7% of MV Agusta to Malaysian company Proton for $70 million. Just a year later Proton sold it back Claudio for one euro. In 2008 Harley Davidson bought MV Agusta for $109 million. In 2010, Claudio took it back again. He was paid $29 million to do so.

The Castiglioni Family
The Castiglionis began a small metal parts stamping and foundry business in the 1950s, but when brothers Claudio and Gianfranco joined the firm they moved it towards the motorcycle business. In 1978 they bought the AMF Harley-Davidson assembly factory in Varese and created the Cagiva bike company. By 1979 they were producing 40,000 bikes a year. In 1985 the Castiglionis bought Ducati, in 1987 they added Moto Morini and Husqvarna, and the group was soon the world’s fifth biggest motorcycle manufacturer.

They went into racing with Ducati and won the World Superbike Championships every year from 1990 to 1995. Despite their success on the track the Castiglioni Group – which consisted of over 30 businesses ranging from foundries to hotels – needed cash, and part of Ducati was sold to a US private equity firm for $143 million. They sold the rest of the business after Ducati’s 1992 IPO, making a further $192 million. Over time, the other motorcycle brands were disposed of, leaving MV Agusta as their only motorbike asset. The family group is still large, diverse and profitable.