It is striking that the office of one of Brazil’s most important fund managers is on a compact side street rather than one of the city’s main boulevards. It is as if wealth in the nation’s business capital is something to be kept discrete. The most obvious thing about Rua Amauri, tucked away off a main business thoroughfare is the number of restaurants all exuding an unmistakeable air of understated elegance.

It’s all in stark contrast to the bustling nearby Avenida Brigadeiro Faria Lima, one of the main boulevards in São Paulo’s Itaim Bibi business district. Perhaps the most imposing building on Rua Amauri is home to Pragma Gestão de Patrimônio, Ltda, the multi family office, which began life as adviser to one of Brazil’s most successful family-run eco-consumer businesses, which the firm did not want us to name for confidentiality reasons.

“The general numbers are not public. Nor is the number of clients. We don’t want to give an idea of how much our clients have. We want to protect confidentiality. It’s not a big client base. We do not have any commercial team [or] any marketing,” says Luiz Felipe Andrade, one of the group’s nine partners.

“The model we are pursuing is to have very few clients. It involves sizeable volume for each one so we can provide a service that their [own] family office would do, if they had one. The majority of our clients are big enough to have their own family office,” he says.

The company is not actively growing its client base, and only one new family joined last year. Andrade takes up the story.

“Sometimes a new client will come based on relationships and if they meet our minimum level, [in terms of] the growth rate we expect on their assets, we might take them on as a client,” he says. “We want a client that comes with enough volume, or has the possibility of reaching our target in a couple of years,” he says. 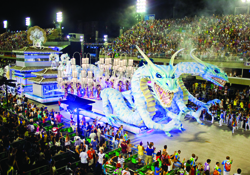 “Pragma was a result of the spinoff of the investment team of the family office of the controlling shareholders of a leading Brazilian company,” he says. “The family office was created in 1998, and in 2007 the families sponsored the spinoff of the investment team that became Pragma. The partnership was created with the objective of creating an institutional solution that would allow growth of the team, attraction of senior and talented investment professionals and a more institutional long-term solution for the management of their family wealth.

“They maintained all other structures of the family office, the personal staff, accounting, concierge, everything not related to investment management. Since 2007 a very select group of families have also chosen Pragma as their investment adviser and family office.”

The reorganisation has allowed Pragma to concentrate on its key goal —investment oversight.

“We want to achieve a ‘sweet spot’ in terms of assets under management (AUM) and number of clients that allows us to afford a senior team that can provide the investment capabilities that we need, but to retain the personal contacts and relationships we have with our clients. That’s the balance we want. We’d like to have a couple more clients, but it’s nothing we have to go after.

“In general, our function is to select best-in-class managers in order to implement the desired allocation for each one of our clients.

“There are 35 people in the office. Everyone, especially the senior team and partners, basically do everything. We, as partners, have direct responsibility for the investments (supported by investment teams) and also maintain the relationships with our clients,” he says.

Local appetite for real assets
Brazil recently overtook the UK to become the world’s sixth largest economy, with a GDP of almost $2.5 trillion, double the size of Mexico’s, the second-largest Latin American economy, and almost five times that of third-ranked Argentina. There is a buzz of self-sufficiency in Latin America’s biggest country, as its growing middle class drives growth by adopting the spending habits of western consumers.

“There is a very strong focus on real assets,” says Andrade. “We like real assets, because they provide inflation protection. Several asset classes are not giving you inflation protection today. In general we invest passively in classes like corporate bonds, sovereign bonds and fixed income in general. For other classes we tend to take more active risk investing in very high conviction managers.”

Treasury inflation protected securities are a key credit. “The Brazilian treasury inflation-protected securities are very interesting. However, you have to be a little careful in a tightening cycle. Bonds in general are suffering,” says Andrade. “We want to do more on credit, especially structured credit. We haven’t yet developed the capabilities to have more exposure to this investment class. Our long-term strategy is to look more at real assets. Fed funds here in Brazil used to earn a real return close to 8% or 9%. The Fed funds rate was much better than inflation. It is not that easy anymore to achieve real returns. Around the world it’s even worse and becoming very difficult.”

End of the Carnival?
While his longer-term prognosis for the Brazilian economy is good, he is perplexed at the inability of the Brazilian government to deal with immediate and pressing problems. As might be expected from the guardian of a bastion of Brazil’s wealth management industry, a lack of satisfaction with Dilma Rousseff’s left-wing administration is evident.

“I am not so optimistic now about the Brazilian economy,” says Andrade. He cites structural problems, including difficulties in the way of a fully functioning private sector, and the government’s handling of short-term issues. Poor infrastructure has long been a major criticism of the government’s handling of Brazil’s export-led economy. “[The government] are adding too much uncertainty. There is regulation and government intervention. Infrastructure and education are key areas requiring improvement.”

“I am not optimistic in the short-term, over the next five-plus years. We have a bottleneck in the economy, created by a crazy and heavy tax burden; lack of infrastructure and poor education,” he says. “Unless you create a positive agenda, a long-term view and the rules of the game [to create stability] the government will not create the necessary environment for the private sector to step in to do the investments that are necessary to remove the bottlenecks we have in the economy,” he says.

“Investors can deal with risk but they can’t deal with uncertainty.”

Andrade concedes unemployment amongst Brazil’s 200 million-strong population has dropped from between 12% and 13%, down to between 5% and 6% in the last five years. “Basically, we are at full employment. Productivity has not gone up.”

“Under Lula [former President Luiz Inácio Lula da Silva], the PT [Partido dos Trabalhadores or Labour Party] was sensitive enough to maintain the same economic model as the previous government. We were also very lucky to have a benign global environment until 2008. Things went pretty well. A lot came from the reduction of inflation. Inflation is a tax on the poor. There is a need to control inflation.”

Bullish on Brazil, despite the bumps
“Brazil was very unique in that sense. In the past we created unique mechanisms that allowed the economy to work even with very high inflation — hyper-inflation in some sense — for several years. We saw 20 to 30% inflation per month for several years. We survived huge inflation for 20 years without any major disruption. However these mechanisms that allowed that to happen were much less effective for the low-income classes.”

“On a more long term view however, I am bullish. There are many opportunities for investment,” says Andrade. “Brazil is a huge country with lots of natural resources. We are a democracy, our institutions are stable and we don’t see institutional risks. We have a strong private sector and a large base of local investors willing to deploy capital and invest. Unlike Chile or Mexico, where wealth is concentrated in a very small number of families and industrial groups,” he says.

“In that sense, it’s a great country, but the road to progress could be a little easier. I think we could do better than we are doing. I definitely see Brazil as a fantastic country.”

The international edition of business magazine Valor Econômico said Pragma was one of a number of funds that “work in Brazil to exclusively create positive social impacts through the financial market”.

Andrade concludes: “We started as a single family office for the controlling shareholders and that helped in terms of reputation. Things evolved in a good way, basically by word of mouth and networking,” says Andrade. “People in the market know Pragma on the other side of the table. They know we have a very different approach and capabilities.”