European family businesses are buoyant about the business outlook for the next 12 months, but political risks continue to cloud the horizon. Nicholas Moody reports European family businesses are buoyant about the business outlook for the next 12 months, but political risks continue to cloud the horizon. Nicholas Moody reports

Increasingly fine conditions, with the threat of geopolitical thunderstorms. If the outlook for European family businesses was a weather forecast this would sum up the current mood of leaders, who while optimistic, are watching the horizon closely.

The European Family Business Barometer 2017, commissioned by Societe Generale Private Banking, found more than 76% of respondents were positive about their business outlook into 2018, with only 4% holding a negative view.

Revenue forecasts roughly corresponded with business confidence. Almost a third (29%) of businesses forecast revenue growth of 5-10% next year, with 38% projecting a 1-5% rise.

The online poll of 51 family businesses from 13 European countries ran for seven weeks from 24 April to 9 May on CampdenFB.com.

Several months after the online poll, CampdenFB spoke to family business leaders from France and the Czech Republic, and two family members directing investment decisions in Belgium and the UK, to see if sentiments had changed.

Cyril Camus, fifth-generation president of France’s Camus Cognac, describes his business outlook for the next 12 months as “moderately positive” with turnover expected to increase by about 10%.

Camus’s response is echoed by Leon Jakimič, president of bespoke Czech glass artists Lasvit, who is optimistic, albeit a little wary.

“Unless something unexpected happens, such as a war in the Korean peninsula, we expect to keep inspiring the world through our beautiful works-of-glass and grow our business by 20% from 2017-2018,” Jakimič says.

Its 20% growth will come thanks to selling its bespoke glass art installations to more private homes and by adding new retail products to its portfolio, such as its new “Lasvit Monsters” series, he adds.

Encouragingly, the CampdenFB.com poll found families are actively supporting the next generation of entrepreneurs.

When asked if family members are encouraged to start their own businesses, 75% agreed, with the bulk having to go out and seek funding independently from the family holding company. 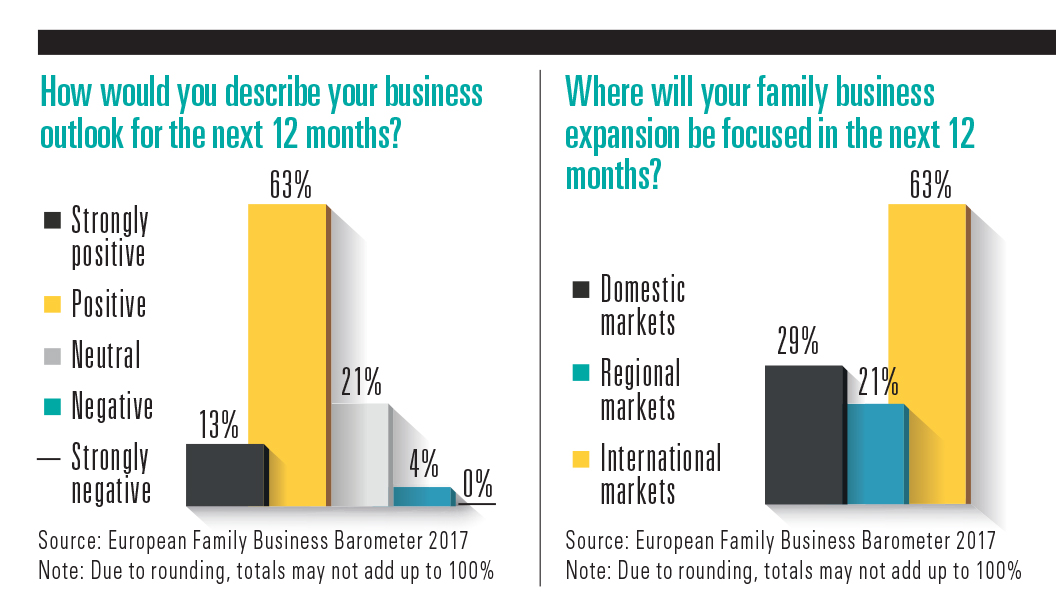 He sees the business outlook for the next 12 months remaining similar to the past 12 months with revenues remaining stable, unless major unforeseen events—mainly political—rock the boat.

Rupert Hambro is co-founder of London-based boutique advisory and investment firm Hambro Perks and one-time chairman of the renowned UK family merchant bank, Hambros. He says Hambro Perks has been much encouraged by the projects presented to it lately and he is confident flow of opportunities will increase. Hambro Perks invests in almost 30 fast-growth companies including UK artisan gin distiller Sipsmiths which last year sold to Beam Suntory.

When asked whether family business expansion would be local, regional, or international, the majority (63%) of European Family Business Barometer 2017 respondents were focused on international markets, with almost three-quarters (71%) self-financing these developments through retained earnings.

This interest in international markets is in line with Camus’s expectations for 2018. China, US, and Russia are the focus for its high-quality cognac, while Jakimič says its main growth will come from the US and Asia-Pacific, although he expects to grow in all other regions too. 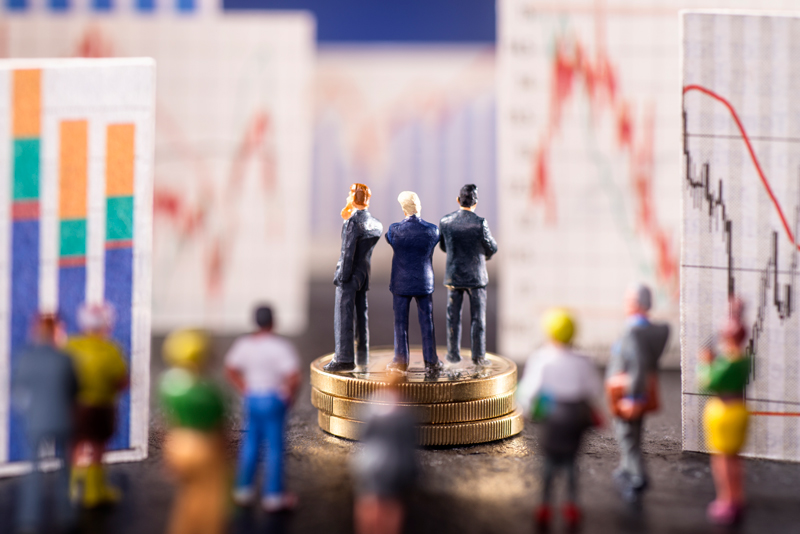 Hambro expects his boutique advisory and investment firm to continue its focus on the UK domestic market with opportunities for businesses to expand internationally.

Winssinger’s view is more rooted in his family office view of its asset allocation.

“The strategy is to keep the present allocation and remain widely diversified between real estate, private equity, and equity, but no bonds,” he says.

Political and geopolitical uncertainty were common fears cited by CampdenFB.com poll respondents when they were asked to name their biggest challenge over the next 12 months.

“Political, social, and fiscal environment change”, “geopolitical risk”, “political instability”, and “fiscal regime changes”, were some of the most common responses given.

Geopolitical risk was Winssinger’s greatest fear as he tries to balance the opportunities around deciding the correct strategy and not being curbed by the low growth/low yield environment, with the challenges of keeping the family motivated by the family office strategy and a long-term view for future generations.

Too much fiscal instability from the changing political landscape was the primary challenge cited by Camus, who also cited a stronger euro as an obstacle to growth in international markets.

The UK’s decision to leave the European Union loomed large in the outlook for Hambro who sees the UK government’s efforts to maintain its firm hand over Brexit and the economy, so to allow a stable environment for business leaders, as a major challenge.

When asked for his comments about the opportunities and challenges of operating a family business in Europe in 2017, Brexit remained a key consideration for Hambro: “Europe will realise that we are more important to them than they to us, which will allow continuing trade on favourable terms,” he says.

For Jakimič the focus is very much on Lasvit and its expansion. His two pressure points: finding and training enough craftsmen and design-engineers in the Czech Republic, and maintaining the ultimate quality while growing fast.

As geopolitical tensions rise across South-East Asia and Germany heads to the polls, those political clouds do not look like clearing anytime soon.