Never give up: Lessons Marilyn Carlson Nelson’s father taught her

If there has ever been a story of perseverance and determination in a family business then it must be that of Marilyn Carlson Nelson. CampdenFB reports on a remarkable story. Many people have had to make sacrifices for their family business. Few have had to give up ice-cream. But that was part of the hard training that Marilyn Carlson Nelson received from her father. “We were often asked to decide between investing in the business or going on a family vacation or having dessert,” she says. The decision came down to compound interest – her father taught them that “family resources that were expended were gone and those that were invested grew at a compounded rate”. The correct answer was quite clear, dessert was regularly eschewed, and a valuable business lesson was learned.

He might have been a strict teacher, but Curtis Carlson clearly instilled a keen love of the family business, the travel and hospitality firm Carlson, which owns brands including Radisson and TGI Friday’s, in his daughter. Indeed, the family firm is woven into her life. “I’m one year younger than our business, so as I was growing, the business was growing. And my sister and I thought of the business as a third sibling because we shared family resources with the business,” says the 73-year-old former chief executive and current chair of Carlson, speaking from the company’s headquarters in Minneapolis, Minnesota. 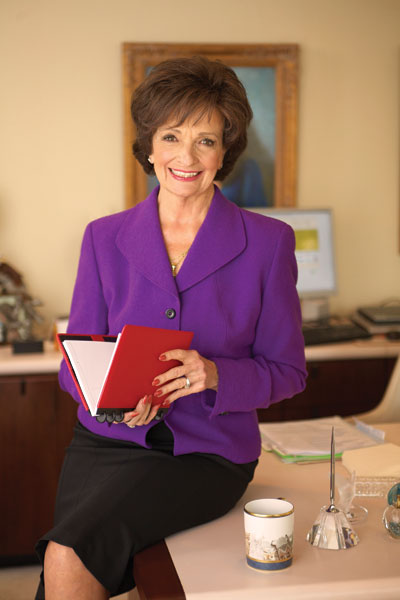 Her story is an extraordinary one, taking in stints at an investment bank, a period when she stayed at home to look after her children, and a decade heading the family business. From the start Carlson Nelson was encouraged by her father to get involved in the business. But their relationship was sometimes difficult. “I am convinced that if he had a son, I would never have had the same opportunity to share his stories and to be mentored the way I was,” she says. Later, when she went to Smith College, a women-only college in Massachusetts, her father “encouraged [her], no insisted” she study economics. The subject – and being a “good leader” – has since defined her career.

It was while working at Carlson between her junior and senior years at university that, she says, she realised that “business can be a powerful force for good”. Alongside Curtis Sr she created a loyalty stamps programme, with churches, schools and various organisations using the stamps as credit towards goals, such as purchasing school buses, disability vans or choir robes. “In a way it was the precursor of today’s social entrepreneurialism, because we were creating a business model that helped sort some of these community problems,” she says.

Despite the success of the programme – ministers, rabbis and school superintendents were promoting the company’s stamps – her father didn’t want her to work at the business when she graduated. “My father felt strongly that in order to work in the family business, one needed to work outside for at least three years and then be recruited into the business at that level or the level above.” But it was the 1960s and “most opportunities for women at that time were as nurses or teachers or secretaries”, Carlson Nelson says – and she wanted to use her economics background.

Finally she found work with Paine Webber, a stock brokerage that is now part of UBS, but on one condition – she had to pretend she was a man. “I had to sign all my reports and all my recommendations as MC Nelson, because they were convinced no one would buy stock that was recommended by a woman.” When she fell pregnant, they gave her “an office and a secretary with a separate entrance, so that none of the men – the investment bankers and stock brokers – would have to see a pregnant woman in the workplace”.

Paine Webber wasn’t enough. “What I really liked to do was create things and build things and be in the game, not be an observer of the game,” Carlson Nelson says. She finally returned to Carlson, where her father was adamant she shouldn’t report to him. Instead she worked in the catalogue division and quickly impressed her non-family boss – and later received a big promotion. Proud, she told her father. “Instead of congratulating me, he told me to go home and raise the children. I was deeply crushed,” she says. Now she reckons he was right – her husband Glen was a trauma surgeon, with “no control over his schedule”, her work was “requiring more and more” of her time, and the couple had four young children.

So, she threw herself into parenting and volunteering – getting some of her first experiences in leadership. Later, as moves were made to end discrimination against women and minorities, her economics background meant she was asked to sit on the boards of several companies and charities, despite being “young enough to be the daughter of most of the men on the boards”. Her father (pictured with Marilyn left) “took note of that, but he never indicated” that she would one day lead his company. “He was always sorely disappointed that he had no sons to take his place and didn’t make a secret of it.”

In fact, her brother-in-law Skip Gage was already working at Carlson and it was he who was made chief executive when the founder needed a heart bypass. At the same time, Carlson Nelson, as vice-president, went to the Wharton School of the University of Pennsylvania, preparing herself to be 50% owner and chair of the board. “And then my father had his heart surgery and he felt wonderful,” she says. Despite being in his 70s, he wanted to return to the business, “which wasn’t an attractive proposition” for Gage. “My father at that point said: ‘If the company can’t have two CEOs, I guess I’m the owner so I should be the CEO’.” The pair “agreed to disagree”, deciding Gage would take a portion of the company and start his own marketing business.

A flirtation with politics was what finally brought Carlson Nelson back into the day-to-day running of the business. “After my children got older, I was being recruited to run for public office and I was inclined to do this,” she says, because she wanted to “make a difference”. A few days after telling her father her plans, he asked her to rejoin Carlson. “He didn’t promise that I’d be the CEO. He just said: ‘Come into the company and play a role, because you’d make fewer compromises than you would in the political system. And if you are willing to work that hard and your husband is willing to support it, we need you in the company’.”

Back at the business, she threw herself into her work. And finally, at Carlson’s 60th anniversary in 1998, she became chief executive – with a huge party, where George Bush Sr gave a speech and Carlson Nelson flew in one of the US Air Force Thunderbirds aerobatics team’s F-16 jets. Her father died a year later.

It was in the following years that Carlson Nelson had to make the hardest and most unenviable decision of her life – that her son, the heir-apparent, wouldn’t follow her as head of the business. “I think, apart from losing my daughter in a car accident, [deciding] that my son was not able to succeed me was the most difficult moment of my life,” says Carlson Nelson. Curtis Jr had worked at the family business for years. And by all accounts, he was very good. He “had never missed a budget” and was “very successful in various roles”, Carlson Nelson says. But then he developed hepatitis C.

“Curtis’s liver was badly damaged from tainted blood he received following a car accident many years earlier,” she says. He needed a transplant, receiving one in 2000. But that was only the start of his problems. “He was on immunosuppressants and was trying to deal with interferon, which is a very difficult challenge,” she says, her words slightly halting. “He ended up with an addiction problem. And it became clear that it was interfering with his ability to work with the company.”

Struggling with balancing the roles of mother and his boss, Carlson Nelson didn’t react initially. “I probably… I might have left him in place too long with the hope that he could work through this problem and he was getting help,” she says. “But then it became clear that the stress and the challenge of the disease were so great that I really didn’t feel it would be possible, and I agreed with our board of directors that he should not be the next CEO.”

Even though he wouldn’t be chief executive, nobody expected Curtis to quit, she says. But his grandfather had publicly acknowledged him as the most likely to succeed his mother and when that didn’t happen “there weren’t any other options in his mind when it came to his future”, Carlson Nelson says. “The combination of that and his disease just compounded and he left the company”. That was in 2006 and the following year he sued both his mother and the family business. “It was several years before we reconciled – we are reconciled now, but he is not in the company,” she says. 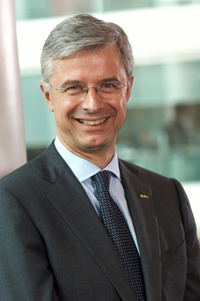 After 10 years at the helm, Carlson Nelson stepped down as chief executive, while remaining chair of the board, and non-family Hubert Joly (pictured right), who previously headed up the company’s travel management division Carlson Wagonlit Travel, became CEO. In her decade at the helm, Carlson Nelson imprinted the business with a very clear set of principles. “We set as a goal when I was the CEO that we wanted to be one of, if not the, most respected private companies in the world,” she says. In what might be seen as a direct continuation of her work in the 1960s, she ensured that the firm works with the communities in which it operates, and sets great store by inclusivity and respecting the environment. 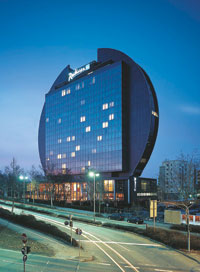 The company is also regularly said to be one of the most family friendly around, offering paid maternity leave, paternity leave and onsite medical facilities. None of this comes at the expense of profits. Carlson’s 2011 system-wide sales, including franchises, were $38 billion (€28.6 billion), while consolidated revenues increased by 8% to $4.5 billion. It employs 170,000 people (“that’s a lot of families that are interconnected with ours,” as Carlson Nelson says) and aims to own 50% more hotels by 2015.

The next generation is already showing serious interest in continuing her work. Carlson Nelson’s daughter Diana sits on the board while another, Wendy, is expected to join when Glen retires later this year. And as each second-generation member reaches 75, more third-gens will get involved. Carlson Nelson and her sister Barbara Carlson Gage’s 16 grandchildren are also being encouraged to get involved – her three oldest grandchildren are already either studying business at Harvard or planning to do so. From a very young age they spend a few days each year at one of the company’s divisions, and take part in the family foundation, which includes a junior board.

“Unlike some companies where the entrepreneur wanted to be a serial entrepreneur and sell the company, my father’s passion was for the company to go on for several generations,” Carlson Nelson says. On his 60th birthday her father told his family of a credo by which he hoped they would live, the last line of which is “never, ever give up”. It seems to have rubbed off on his daughter.