“Is India a Teflon-coated economy?” That is a question on the minds of most following the recent 7% gross domestic product (GDP) growth for the last quarter of calendar year (CY) 2016... “Is India a Teflon-coated economy?” That is a question on the minds of most following the recent 7% gross domestic product (GDP) growth for the last quarter of calendar year (CY) 2016.1 Did the long queues outside of the ATMs and the disruption to daily life last November and December as an aftermath of demonetisation, affecting nearly 87% of currency, only impact GDP growth by 50 bps?2

The truth is somewhat in between. In our recent visits to India across multiple cities located in the north, west, and south of the country, the common feedback was that the pre-demonetisation festival season in October was the best in recent years. The momentum continued in early November, yet the second fortnight of November post-demonetisation was exceptionally bad, with things picking up again in December. The pain was more pronounced in semi-urban and rural areas where a host of unorganised sector industries scaled down and let go of temporary employees. On the other hand, urban focused companies saw a quick revival of demand and market share gains from the unorganised sector.

The demonetisation move was widely criticized as a draconian confiscation of wealth. However, with the sheer amount of dependence on cash and under declaration of income, what was required was a “shock treatment” rather than moral persuasion for the tax evaders to understand that the rules of the game had changed. A frequent remark is in having been through demonetisation, embracing goods and services (GST) now seems like a much less painful option for the unorganised sector. The option of using windfall gains resulting from the cancellation of the old currency for bank recapitalization or social handouts proved to be unfounded as the ingenuity of the Indian people ensured that despite the initial euphoria, the bulk of the old currency came back. Demonetisation did cause its fair share of emotional trauma and a loss of 10-30% of wealth as people rushed to claim unaccounted wealth via exchange into new currency denominations.3

The most remarkable aspect was how both the markets and the population at large have viewed this event. Subsequent to a sharp selloff in November and December, markets have bounced back strongly in 2017 as companies guided to faster business normalisation while the government cleared the roadmap for GST implementation and laid out a fiscally prudent budget for FY 2018. As far as demonetisation was concerned, the investment community’s view changed from a surgical attack on black money to a hasty, not so well-thought-out act. However, one was willing to forget a well-intentioned but poorly executed step in light of scores of positive, productivity boosting measures since 2014. 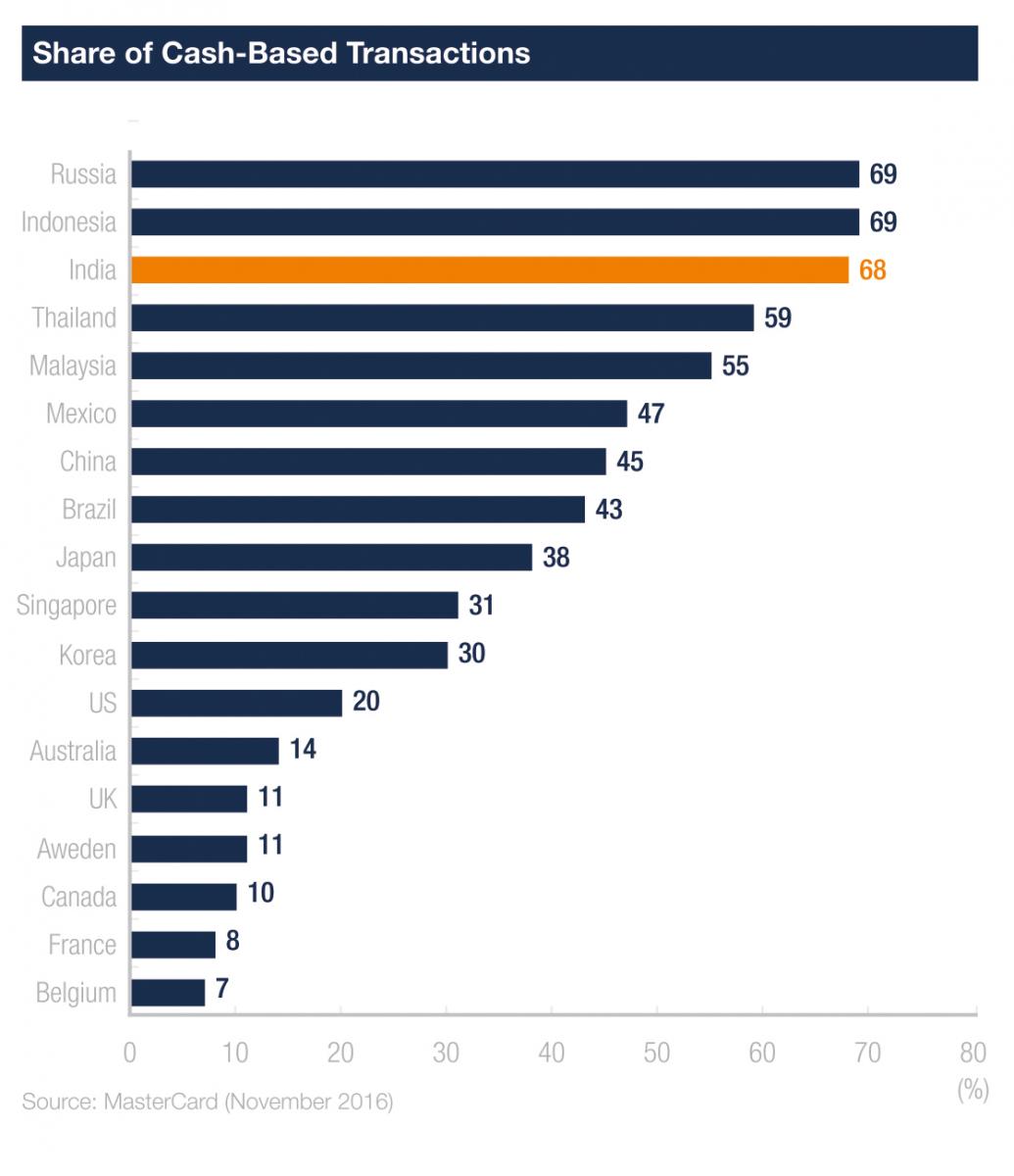 What is amazing is that people at large also perceive demonetisation in a mature way, representing a novel step that caused hardship but failed to serve its purpose because of poor execution. The moot point here is that people are willing to forgive a mistake for a performing, non-corrupt and well-intentioned Modi government. The fact that the government is not shy to undertake tough, radical measures, which may go against the interests of its traditional support base of traders and small-scale entrepreneurs, has gone down well with masses. The end result is a stupendous performance by Modi’s party in municipal and local elections in the states of Maharashtra, Gujarat, and Haryana. The maturity displayed by the voters at large may signify a turning point for Indian politics where development and issue-based governance take precedence.

Since May 2014, Modi’s government has focused steadfastly on improving the ease of doing business with measures like the State Competitiveness Report and GST as a key enabler for the same. Equal attention is placed on enhancing conditions of the ordinary citizen through Aadhar (India’s identification system) for 1.1 billion unique identification cards, 250 million bank accounts, and rural infrastructure buildout in the form of roads and electrification.4 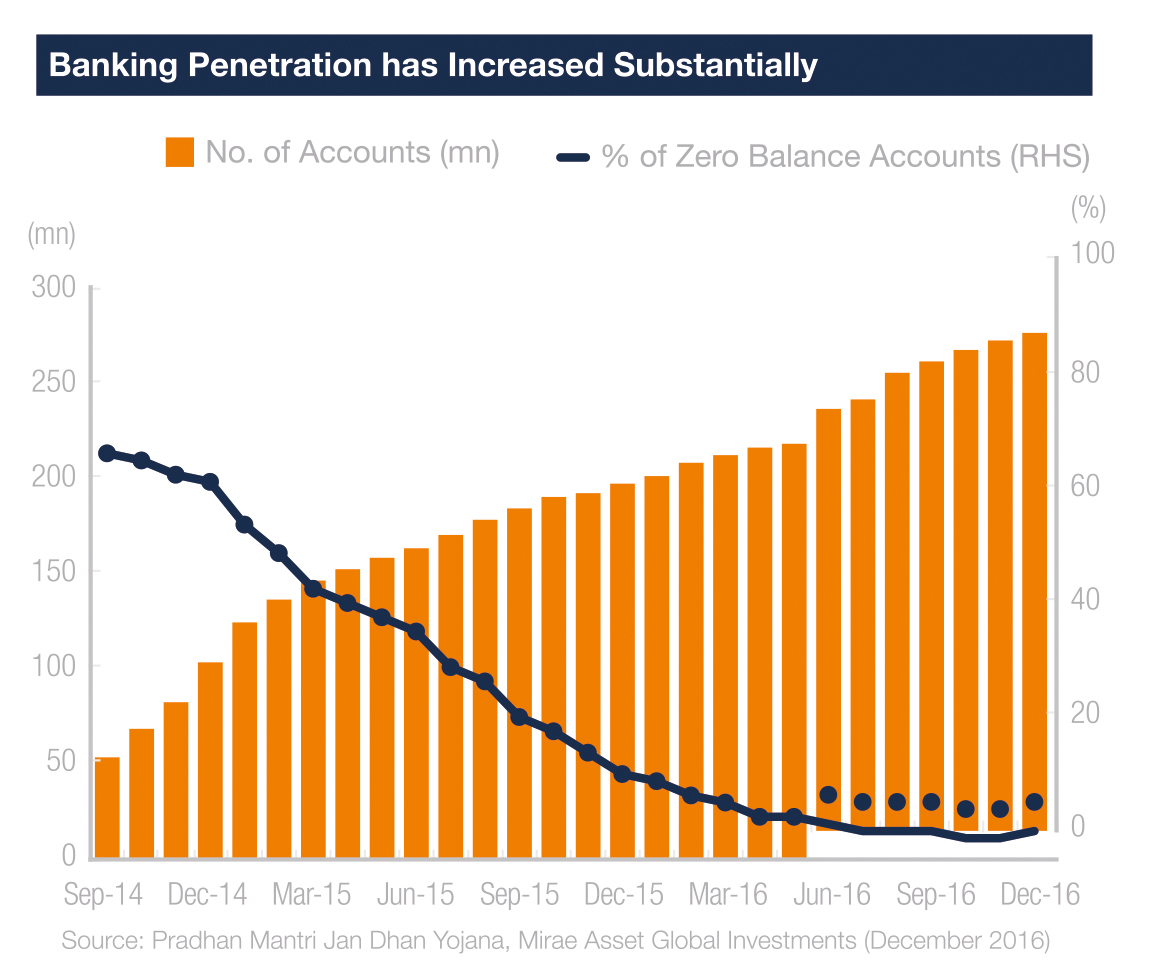 Technology is not only being used by Modi’s government as a key enabler in government-business and government-citizen interaction, but also serves as the political leadership’s biggest challenge. The test of credibility for the government would be its ability to create 10-12 million jobs annually in this automation driven world so that young, favourable demographics become a dividend rather than a mass of disruptive, restless energy.

Disclaimer: This advertisement is for professional investors or advisers only and should not be relied upon by private investors. Investments involve risks, past performance figures are not indicative of future performance. Please seek independent professional advice before making any investments. Issued in the UK by Mirae Asset Global Investments (UK} Limited, 4-6 Royal Exchange Buildings, London EC3V 3NL, which is authorised and regulated by the Financial Conduct Authority (registration number 467535).