Marie-Christine Coisne-Roquette is one of the world’s top family business leaders. CampdenFB finds out what’s behind her success. Marie-Christine Coisne-Roquette, the chairwoman and chief executive of family business Sonepar, won’t say who her preference is for the upcoming French presidential election. Powerful business leaders like her will almost always steer clear of revealing their favoured political leader or party because that might not be good for business. Invariably billion-euro companies will set up a working relationship with the winning party and leader no matter what side of the political spectrum they come from.

But in an age when professional politicians like Nicolas Sarkozy, the current incumbent at the Élysée Palace, and the main opposition candidate in April’s presidential elections, François Hollande, are much less revered, those who know Coisne-Roquette might be tempted to ask her why she doesn’t run for the leadership of her country. 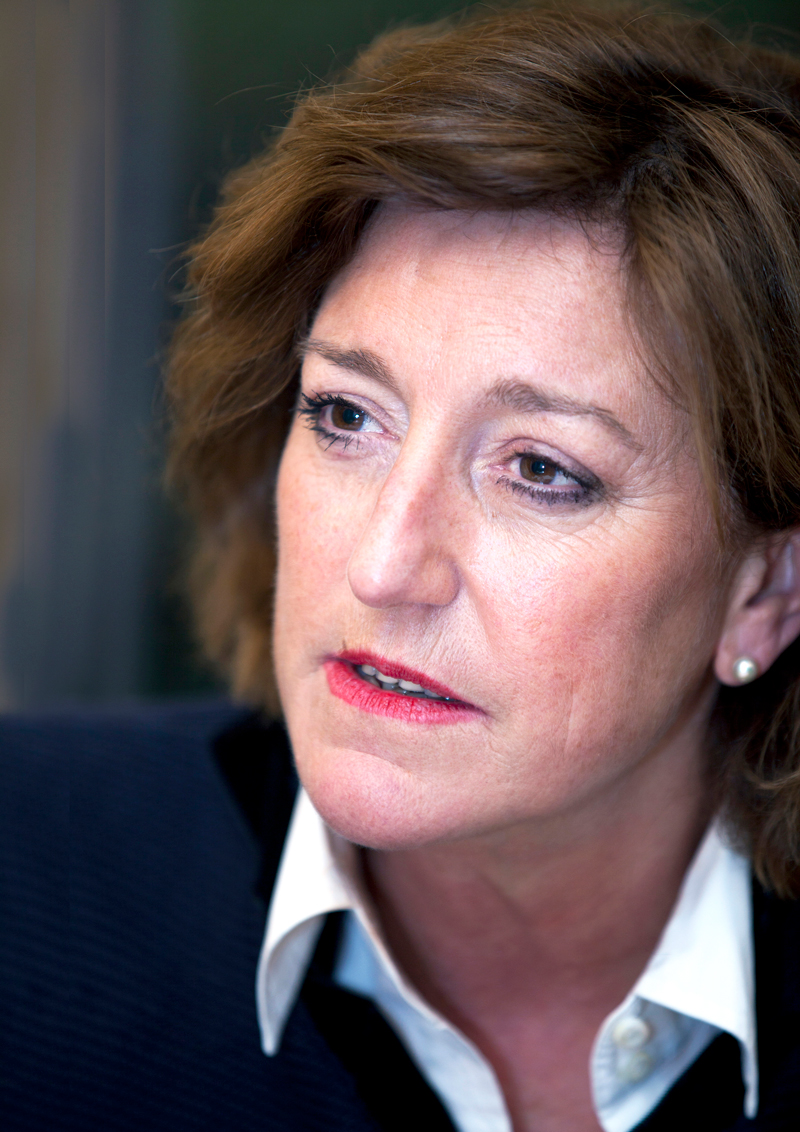 After all, Coisne-Roquette has been managing a multi-billion-euro company that has offices in 35 countries, with at least 32,000 employees, and has also been one of the fastest growing businesses in France for more than 10 years. And aren’t French women – like Christine Lagarde, managing director of the International Monetary Fund – taking on the world?

If strength of character is a big factor in the success of political leaders, then Coisne-Roquette would appear to have it in abundance. Indeed, through her determination and management acumen, she has transformed Sonepar into the world leader it is today in electrical equipment distribution. And she has increasingly been recognised for it; Coisne-Roquette was voted by the Financial Times as one of the top 50 women in world business in 2011. She was also honoured by CampdenFB as one of the top 50 family business leaders in the world both this year and last. Hardly surprising then that she has been behind some audacious dealmaking that has projected Sonepar into the ranks of top global multinationals.

Like, for example, her handling of the battle to buy Dutch rival Hagemeyer in 2007. Under Coisne-Roquette’s direction, Sonepar underbid rival Rexel, but managed to gain a sizeable chunk of the business anyway at a cheaper price. At the same time Coisne-Roquette has been a big proponent of the family business model, championing strong corporate governance procedures that have kept family members happy and brought in expertise from outside to build the company internationally. She has also been instrumental in bringing sound corporate governance to the family holding company, Colam Entreprendre. 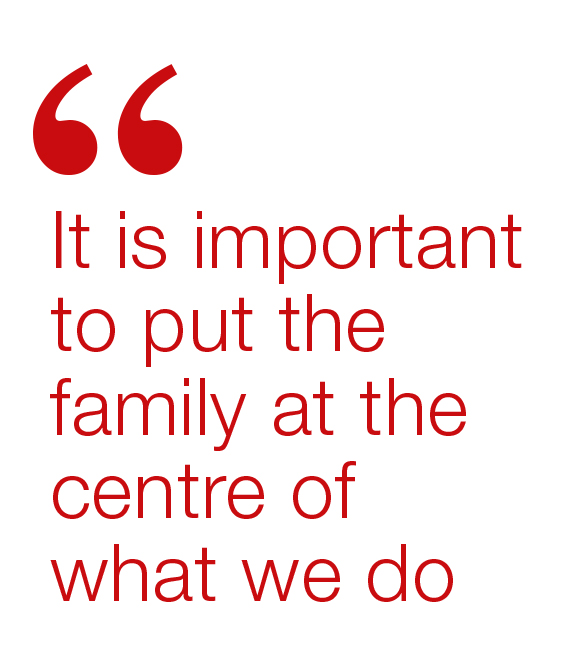 Corporate governance is certainly something that occupies a big part of what I do and it needs to be done right,” she says. “After all, we are a fifth-generation family business with 56 family shareholders, moving to a sixth-generation business with 200 family members.”

Coisne-Roquette says that a part of getting the corporate governance right is to ensure family participation in the various parts of the Sonepar empire as much as possible. “It is important to put the family at the centre of what we do. This is done by making sure as many family members as possible participate at some level with the life of the business.”

The 10-strong board of directors has five family members from the original two families behind the 150-year-old company – the Coisne and Lambert families. Board members include Coisne-Roquette’s father, Henri Coisne, and a descendant of the Lambert family, Paul-René Lambert. Coisne-Roquette is chairwoman and straddles the chief executive role as well, which underlines the strong control her and the families have over the business. Other senior positions like the chief operating officer and finance director are made up of non-family-business professionals, so too is the executive committee.

Strong management, foresight and entrepreneurship from family members are a recurring theme in the success of Sonepar. Indeed, its history should be taught as a top case study at business schools on how family businesses can adapt to changing circumstances, diversify into other areas and continue to prosper from one generation to the next.

The business traces its origins back to the 1860s when Coisne-Roquette’s great- great-grandfather, Henri, teamed up with a Belgian merchant, Léopold Lambert, to set up a textile company in northern France.

One hundred and a few years later, Coisne- Roquette’s father, also called Henri, moved to diversify the business into electrical distribution after identifying a niche that had been mostly neglected by others. As Henri said at the time: “This sector had not yet been structured, and neither the banks nor other investors considered it very attractive.”

Under the leadership of Henri, Sonepar grew rapidly in Europe and North America through numerous acquisitions. Coisne-Roquette joined the family business in the early 1980s, but not before gaining external expertise and experience. She obtained degrees in law and English from the Paris West University Nanterre La Défense, formally Paris X Nanterre, and became a member of the bar in New York and Paris. Her impeccable command of English – learnt as a student and polished in New York as a young lawyer – has no doubt helped in her quest to further internationalise Sonepar. 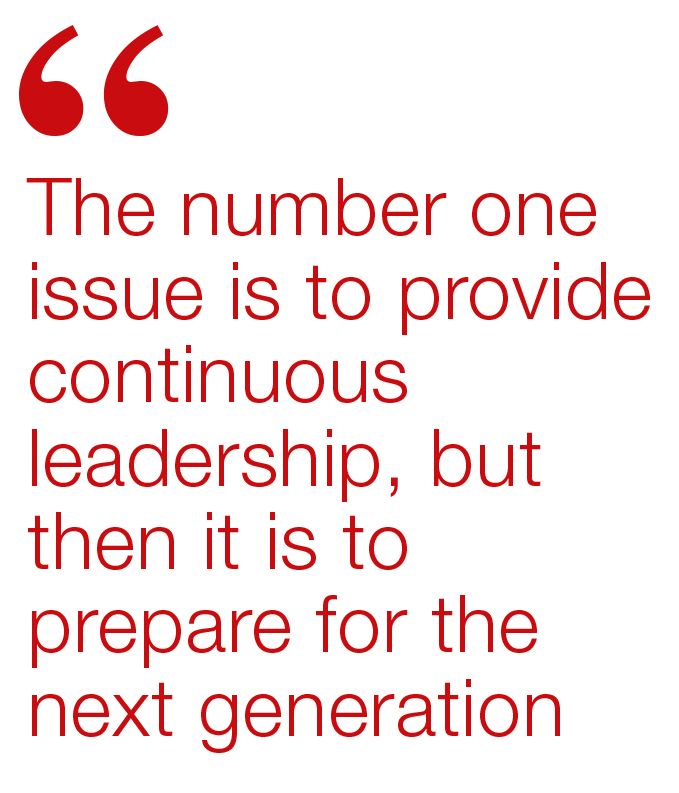 Outside experience is something Coisne-Roquette puts emphasis on for family members. “It’s important that next-gens visit and participate in other organisations,” she says. At 55 and with nearly 30 years at the family business, much of which as its head, Coisne-Roquette says a big part of her role in the next 10 years is to identify her replacement. “The number one issue is to provide continuous leadership, but then it is to prepare for the next generation.”

Pressed on whether anyone has been identified as a potential successor, Coisne-Roquette was tight lipped, but is adamant that a suitable candidate will be found in due course. “In 30 years time, Sonepar will still be in family hands. This is our will and ambition.” Arguably, few family business leaders are willing to predict that with such certainty.

But, given leadership is normally about one individual, when that successor is eventually chosen from the 6th generation, there is big potential for some disgruntled family members who missed out on the top job. As Coisne-Roquette admits: “Not all 200 people can have power.” What is needed when there are so many competing interests on the business is what she says is “very clever estate planning that can satisfy family wealth management”.

The ability to dish out big dividends, admits Coisne-Roquette, also helps to assuage any dissatisfied family shareholders. Sonepar, which had revenues of more than €13 billion last year, has witnessed revenue growth of around 7% annually in the last 10 years – strong growth for any company, but particularly one at such a state of maturity. And Coisne-Roquette is clear where she wants the company to be in terms of revenues in 10 years time – “double the size it is today”, she says without hesitation. So the big dividends are likely to continue to flow. 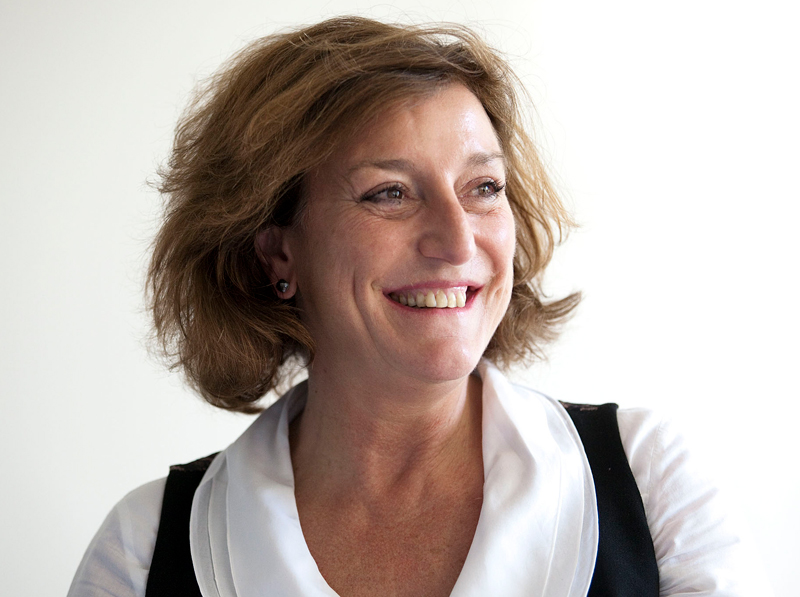 Growth will help with keeping family shareholders happy, particularly if Sonepar can manage to find another inspirational and entrepreneurial leader from the ranks of the family like Coisne- Roquette and her father beforehand. But that isn’t certain. Asked whether she was aware of the family troubles at a firm with headquarters a few hundred metres away from Sonepar, namely Hermès, and whether there are lessons to be learnt, Coisne-Roquette sees Sonepar as a completely different animal, not least because it is 100% family owned. “You’ve got to ask the question why [Hermès] went to the stock market in the first place,” she says. 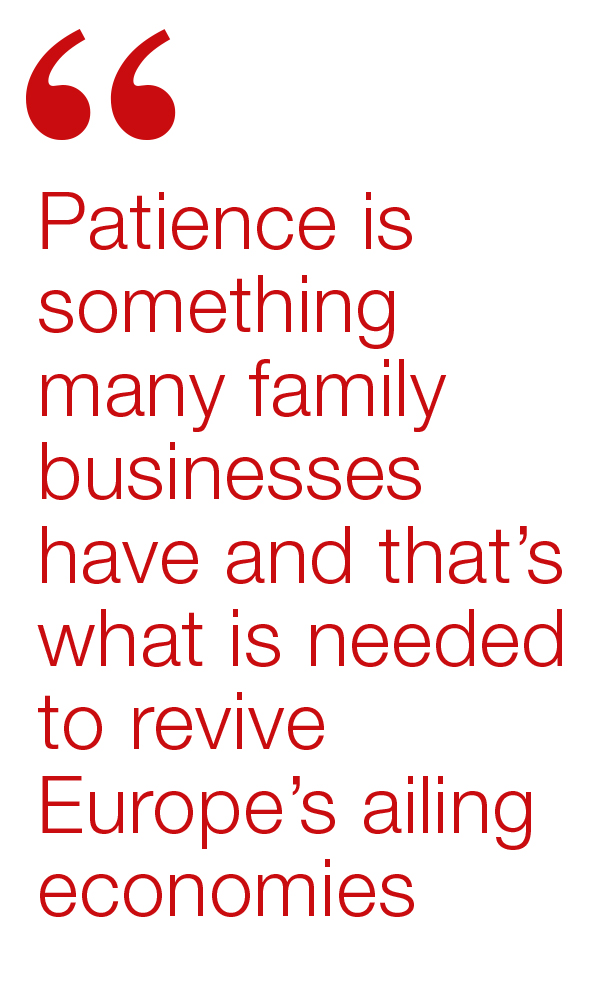 In its sixth generation of ownership, the family behind Hermès was rocked in late 2009 when it was revealed that the luxury conglomerate LVMH had built up a 17% holding in the maker of the iconic Birkin bag through complex and secretive share dealings. That holding has since increased to 22%. The threat of takeover prompted the descendants of the family to set up a holding company aimed at keeping the business under family control.

Coisne-Roquette says there is no pressure on Sonepar to seek a partial listing on any stock market, nor will there be in the future. She says that the company has always been extremely solid when it comes to its finances.

But maybe part of Sonepar’s success, when it comes to avoiding the pitfalls of some of its other French family business counterparts, has been that it is still in a sector relatively unknown even after 40 years of being involved in it. And maybe Coisne-Roquette’s father’s observation still applies, namely that Sonepar is still unattractive to banks and other investors.

She admits that operating in a sector that some might feel is prosaic might have its benefits to keeping a family business together for such a long time. But that isn’t enough to ensure success. “You need to ensure that entrepreneurial talent comes to the fore. Businesses also need to be flexible,” she says. “Maybe we will be making most of our revenues from electrical distribution in 30 years time, or maybe we won’t.” 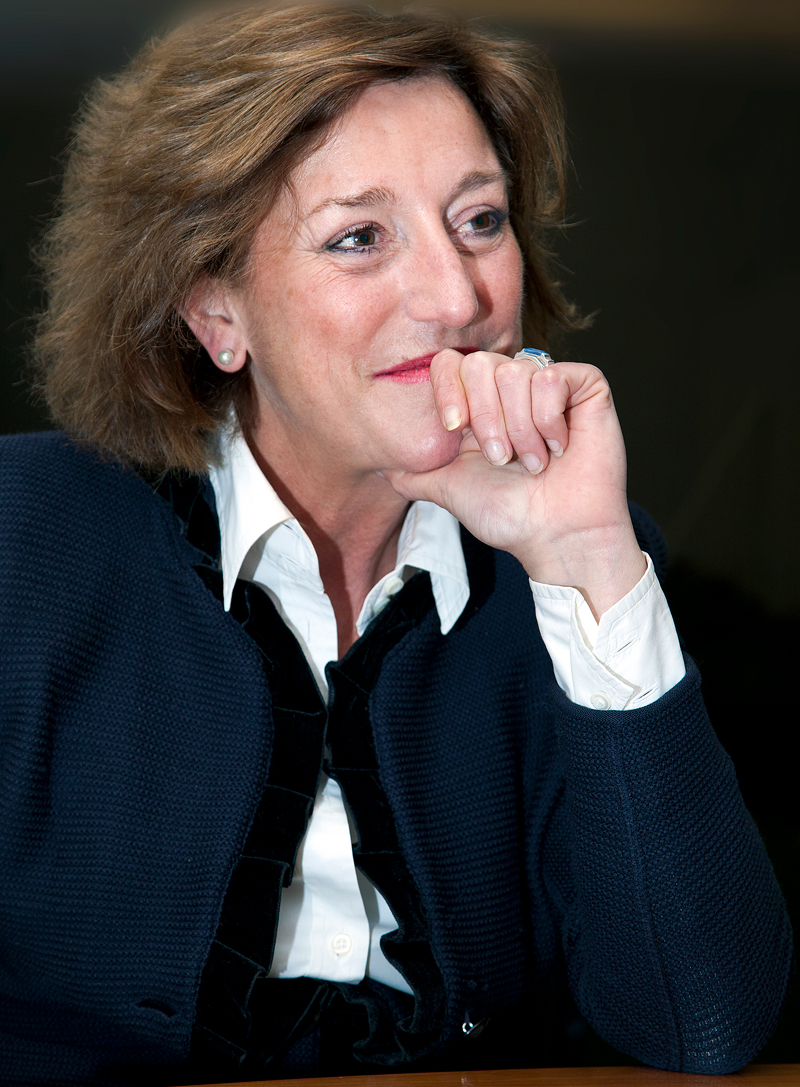 Unsurprisingly, Coisne-Roquette’s talents have been sought outside of the family business. She sits on the board of the oil company Total and chairs the tax committee of Medef, the French business association. Some commentators have even said that a top political career could be in the offering if she wanted it. But Coisne-Roquette seems content with her role at Sonepar – and promoting the family business model, which she feels is crucial for all economies around the world.

Asked whether family businesses should play a role in the recovery of the eurozone, she says yes and thinks their often long-term perspective on growth is what Europe’s economies need right now. “Patience is something many family businesses have and that’s what is needed to revive Europe’s ailing economies.”

Whether family businesses can be at the forefront of Europe’s economic revival remains open to debate. But there is little doubt family businesses like Sonepar are to be admired and studied as examples of best practices for other companies to follow – whether in Europe, or for that matter elsewhere. That is in part due to the leadership skills of Coisne-Roquette.