Louis Vuitton packs its trunk and leaves the Red Square

Following public outcry, Louis Vuitton, controlled by France's Arnault family via their juggernaut LVMH, has dismantled a giant promotional replica of one of its trunks in Moscow's Red Square – just days after it was erected. Following public outcry, Louis Vuitton, controlled by France's Arnault family via their juggernaut LVMH, has dismantled a giant promotional replica of one of its trunks in Moscow's Red Square – just days after it was erected.

The luxury luggage company had built the structure to house an exhibition, due to open on 2 December, to celebrate its 120th anniversary.

But Russian leaders said the symbol of hyper capitalism was inappropriate for a location inextricably linked with Russia's communist history.

The trunk was built only a few metres from Vladimir Lenin's mausoleum, where the mummified body of the revolutionary leader is displayed in a glass case.

The Red Square was the site of many communist-era military parades and is just next to the Kremlin. Locals also complained the trunk blocked views of the ornate Saint Basil's Cathedral.

Louis Vuitton set up the exhibition in partnership with the GUM department store (pictured, left), whose 18th-century building borders the Red Square and is also celebrating its 120th anniversary this year. 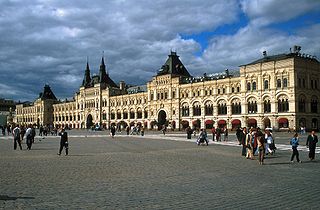 According to media reports, the store told Louis Vuitton they had to immediately remove the structure out of respect for public opinion.

Louis Vuitton said in a statement they had dismantled the trunk so as not to upset any sensibilities expressed by the public, but said it still planned to hold the Soul of Travel exhibition elsewhere in Russia's capital.

The proceeds of the exhibition were supposed to be donated to children's charity The Naked Heart Foundation, which was set up by model Natalia Vodianova – the partner of Antoine Arnault, son of LVMH chairman Bernard Arnault.

The GUM department store has said that it will instead donate the proceeds of the Christmas ice rink it sets up on the square to the foundation.