Letter from the US: What Trump means for large US family businesses

Nobody really knows what the Trump presidency will bring, but one thing is certain: Trump is a very controversial figure who evokes strong emotions on both sides Two days after Donald Trump shocked the world by being elected as the 45th President of the United States, my wife and I travelled to Argentina for a vacation. Nearly everyone we met asked about the election, mostly saying something like: “What are you crazy Yanquis thinking?” The newspaper headlines in Buenos Aires were extremely unflattering, as they probably were worldwide. Nobody really knows what the Trump presidency will bring, but one thing is certain: Trump is a very controversial figure who evokes strong emotions on both sides.

Though I could opine for days about what Trump means politically, socially and economically, I will limit this letter to what the new president may mean for large family-owned businesses in the US. Different businesses in various industries may suffer or benefit from Trump’s changes in immigration, trade and infrastructure investments, but overall, American family businesses will likely be most affected in two areas: taxes and regulations. This is especially true since Republicans now control both Houses of Congress (the Senate and House of Representatives). 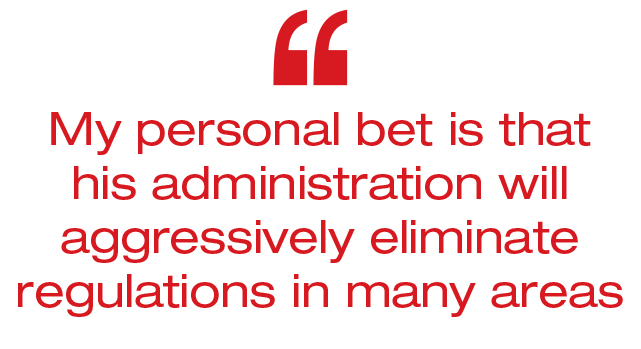 Let’s start with taxes. Perhaps surprisingly, the United States has, by far, the highest marginal corporate tax rates in the developed world at 35%. Most large family companies pay this corporate tax, plus state income taxes. Trump has promised to reduce the US corporate tax rate substantially. He wants to lower it to 15%, but most commentators think 25-28% is more likely. In any case, this will provide a significant tax benefit to large companies.

But more significantly for wealthy American families, the new president and his allies in Congress may reduce the estate tax. In the US, when people die, the national (federal) government levies a substantial tax on the value of his or her estate. The first $5 million or so are exempt, but above this amount, rates rapidly rise to 40%. This high estate tax makes transferring family company ownership between generations challenging. President Trump is likely to either raise the exemption rate and/or lower the estate tax rate, both of which would help large family-owned firms. As a important aside, family-owned firms’ stock values are reduced for lack of marketability and a minority discount. Regulations have been proposed to eliminate this discount, which would have a huge negative impact on inter-generational wealth transfers. President Trump would most likely prevent such regulations from being enacted.

From a tax standpoint, therefore, the prospects of a Trump presidency for large family-owned corporations are positive. There is also Trump’s pledge to reduce regulations. Our regulations are written and passed by the president, and they have grown exponentially over the decades, usually because they never lapse. Many businesses complain that regulatory red tape makes it difficult and costly to do business. Mr Trump promises that for every new regulation, he will eliminate two. As the president, he has this power generally without requiring assent from other branches of the government. My personal bet is that his administration will aggressively eliminate regulations in many areas. This, too, is generally good news for large family-owned firms, though some companies benefit from special treatment that regulations afford.

Overall, it’s difficult to rise above the emotions and fear surrounding the American presidential election, but one thing is clear: President Trump will likely be a big supporter of business, including large family-owned firms.

William Goodspeed is an American business executive with extensive experience in family businesses. A member of the Huber family and longtime Huber executive, he serves on several family company firms, including Sheetz, ABARTA, Granger and Longo’s. He also helps develop next-generation family members for future leadership.