Letter from the US: How does family succession square with a meritocracy?

Why appoint family members as directors when the pool of excellent, qualified, independent executives numbers in the thousands? Why appoint family members as directors when the pool of excellent, qualified, independent executives numbers in the thousands?

The Fourth of July is a US national carnival unlike any other – celebrating the anniversary of the signing of the Declaration of Independence in 1776.

All over America, families carry flags and dress in red, white, and blue while gathering for picnics, concerts, fireworks, and a surge of patriotism. It is not really independence from Great Britain that we celebrate, for Americans love the British (Downton Abbey is a huge hit in the US, as is the British Royal Family). Rather, we rejoice in the birth of a nation founded upon the principles that all men are created equal and endowed with the inalienable rights of ‘life, liberty, and pursuit of happiness.’ An important part of this is the denial of hereditary titles, which are expressly forbidden in the US constitution. 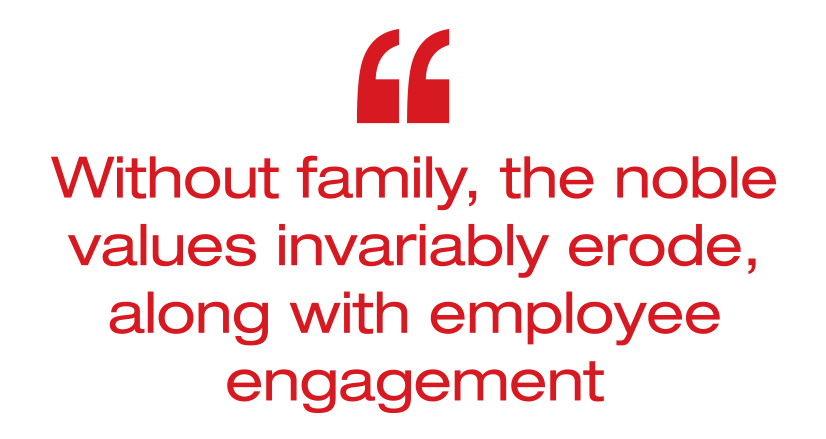 The root of American scepticism of hereditary titles is our strong belief in meritocracy. Americans believe that everyone should start equal and the best will rise to the top, which ultimately benefits society the most. How does meritocracy square with family business succession? On the face of it, family succession sounds a lot like hereditary entitlement.

In my experience as a family executive (J.M. Huber), family board member (Huber) and independent director in family businesses (Sheetz, ABARTA, Longo’s, Granger), I have seen this issue frequently. At Huber, two of us family members became very senior executives in our mid 30s and early 40s. There were undoubtedly better candidates on paper than the two of us, but it worked out. The issue also arises for family board members: why appoint family members when the pool of excellent, qualified, independent directors numbers in the thousands?

For the highly rational and left-brained, the debate seems nonsensical: the best outsiders are almost always superior to family members. But as happens so often, the left-brained approach to human endeavours and organisation falls woefully short. Family members are not competing with talented outsiders for board and executive positions in just any company, but in a family firm that usually bears their name and is owned by their relatives.

One of the key drivers of family business success versus public firms is the sense of higher purpose and strong values. As family business expert Josh Baron wrote recently in the Harvard Business Review (Why the 21st Century Will Belong to Family Businesses (HBR, March 2016)): “…families are the primary carrier of values, and business families can weave their values into the very fibre of the organisational culture. Our experience has shown that because employees work directly with the owners, there is often a pronounced loyalty effect, which augments the important sense of mission.”

It is impossible to weave family values into the ‘very fibre of an organisational culture’ without family working directly with employees at all levels. Family involvement is also key to employee loyalty and a strong sense of higher purpose, which leads to the secret weapon of engagement. Without family, the noble values invariably erode, along with employee engagement.

Destructive nepotism is a legitimate danger, which is why families must thoughtfully prepare the next generation to lead and govern the family enterprise. It takes many years, often decades, to instill the right values and create the work ethic, experience, and competencies to serve as directors or executives in family companies.

But it is worth it.

William Goodspeed is an American business executive with extensive experience in family businesses. A member of the Huber family and longtime Huber executive, he serves on several family company firms, including Sheetz, ABARTA, Granger and Longo’s. He also helps develop next-generation family members for future leadership.