Ladies first: How daughters are playing the succession game

Succession is one of the most widely-discussed issues in the family business realm, but it is still relatively newsworthy when a daughter—rather than a son—takes the reins. Alexandra Newlove explores the upsurge in women inheriting ownership and management For more than half a century, 80-year-old Marchese Piero Antinori has been a driving force behind one of the world’s oldest family businesses—Italy’s Marchesi Antinori.

But the 26-generation wine dynasty nearly slipped out of family control in the 1980s, partly due to the fact that the Marchese had three daughters and no sons, and thus assumed he had no successor.

“In Italy, until a few years ago there was a very masculine mentality,” explains his daughter Allegra Antinori, who today heads Antinori’s retail and restaurants business.

“For my father, it was certainly not usual or expected that we would work with him and give him help.”

So it was a pleasant surprise for the elder Antinori when his daughters came of age and proved themselves to be passionate and capable within the family business. Realising he did indeed have a next-in-line, he launched a battle to return the business to 100% family ownership, having sold part of it to UK-based hospitality corporation Whitbread in the early 1980s, a relationship which had since soured. 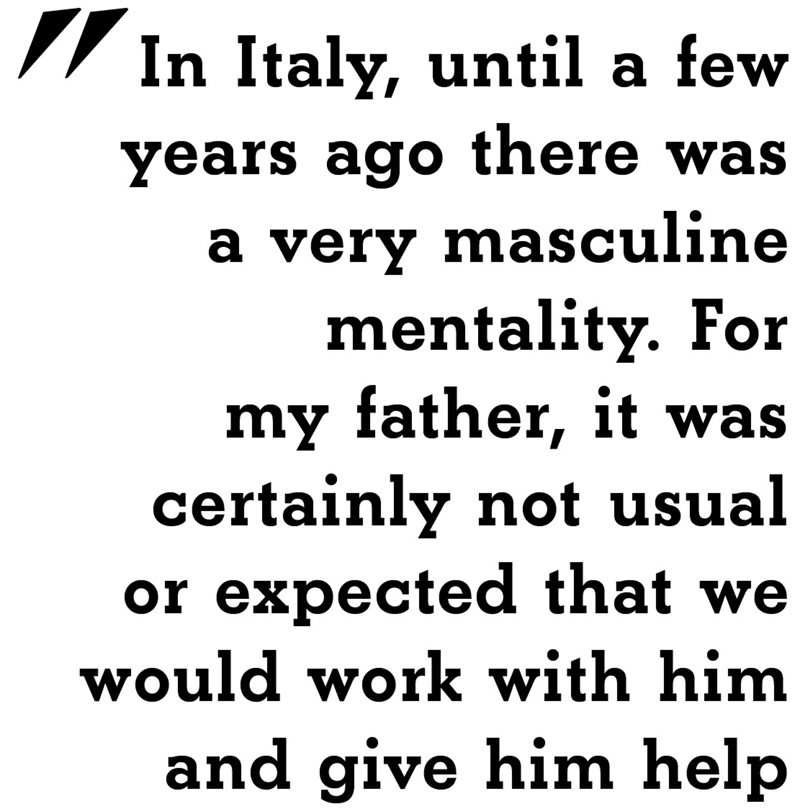 “When my sisters and I started to work at 18 years old, at that point he understood there was a possibility of continuing [family control],” Allegra says.

“In 1992, we bought back the part of the company we had sold, which was about half. Whatever [my father] has done to grow the company, he really did with the idea of it continuing to the next generation.”

Today Allegra’s elder sister Albiera is company president, and youngest sister Alessia is in charge of the Antinori Art Project, making the trio the first female management team in the company’s 633-year history. Their father, semi-retired, acts as honorary president. 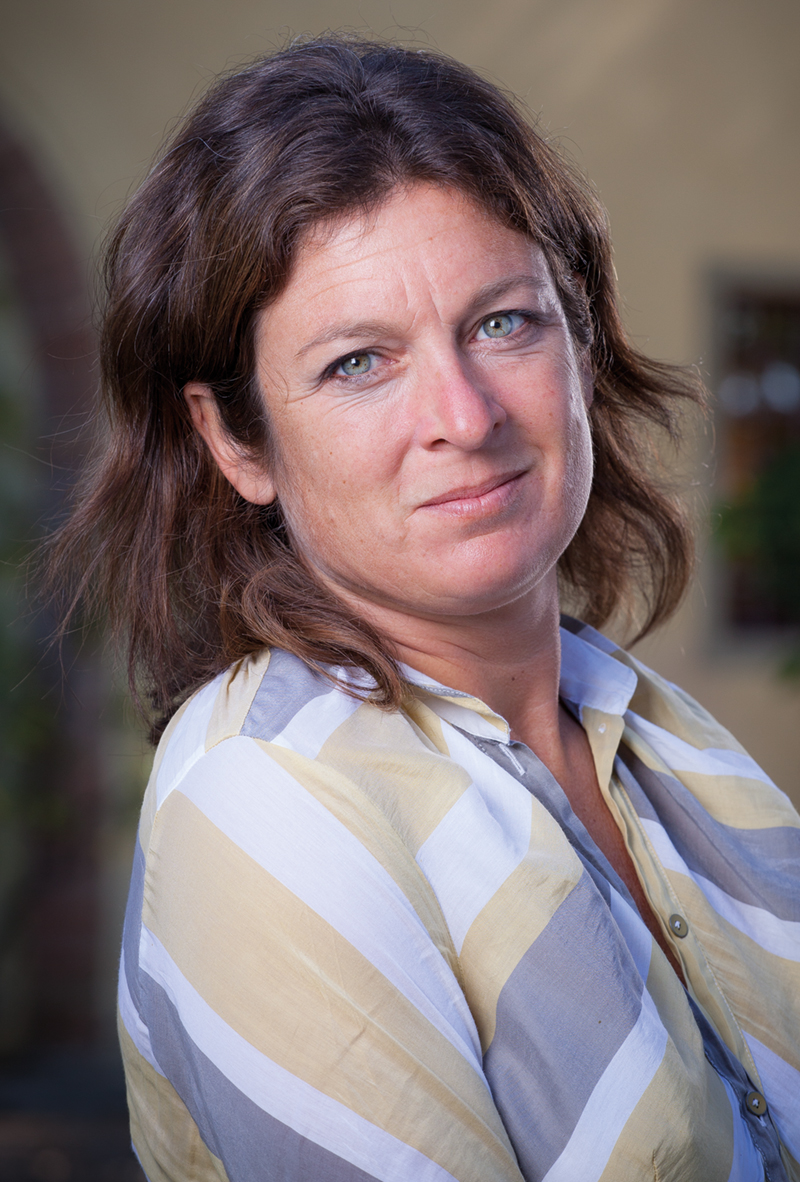 Was taking over from 25 generations of male heirs daunting?

“I first started working for [Californian winery] Robert Mondavi, then for 32 years I have worked for Antinori. Things have changed a lot in that time, but the company has been flourishing… it has doubled the exports, tripled turnover, and doubled the quantity of wine produced, always with attention to quality.”

Of course, there have been challenges. Allegra describes the period where she had young children while working as “a bit more of a hassle”.

When it comes to her own children, a 19-year-old son at university and a daughter, 17, currently doing work experience in one of Antinori’s retail shops, Allegra says: “We will see”.

While it is still far more common to see men at the top in family business, and the gender pay gap closes at a glacial pace, some research suggests that inequality is less acute within family-controlled companies than other businesses.

A 2017 study by consultancy EY, Women in Leadership: The Family Business Advantage, looked at 525 of the world’s largest family-owned companies, and found that on average 22% of the C-suite was female, compared to 13% to 15% women in top management positions in the general pool of Fortune 500 companies. 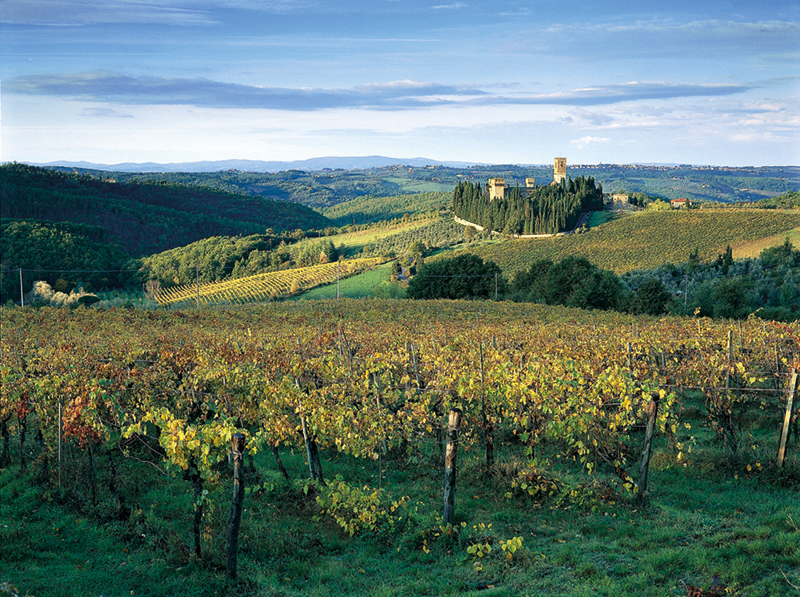 More than 40% of these family businesses told EY that female family members had become more interested in joining the company over the previous three years, while 70% were considering a woman for their next chief executive.

So what do family companies do differently?

Where women from the family were already involved, female membership at board level could beget more female leaders in the wider company.

Women could get a sense of “there’s a vision I believe in and an environment in which I can balance all obligations, including family,” Hall says.

“There has definitely been a shift within organisations, creating a more favourable environment, with less hierarchy, more collaboration, aspects which help women to thrive.”

On the other hand, Hall acknowledges there is still work to be done. 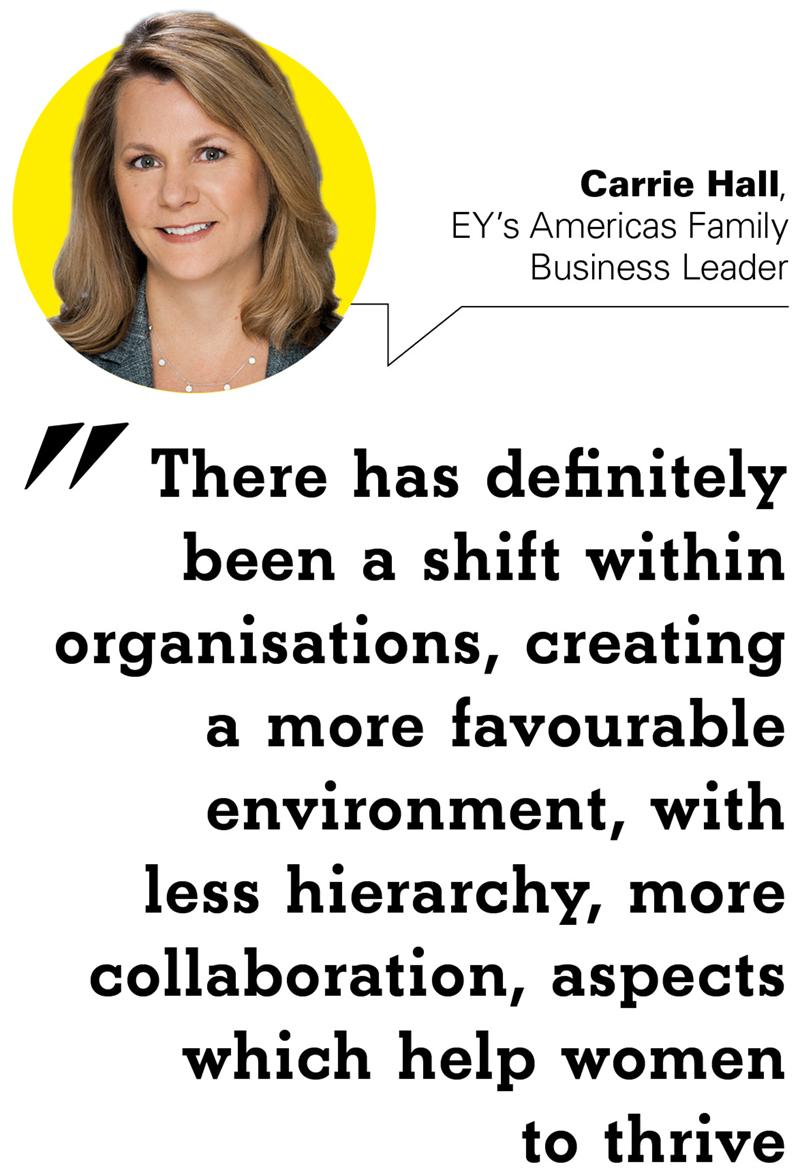 In 2016, PwC’s Next Generation Survey asked 250 potential successors about how gender would impact their careers within their own family’s business.

A total of 45% of women said their brothers or male cousins were more likely to run the business in the future. Meanwhile, 31% of young men said it had already been agreed they would one day manage the company, compared with 21% of young women.

PwC also found that 30% of next-generation women had a seat on the board compared to 55% of the men. Almost half of women felt their gender could be a barrier to them running the business, and the women appeared less confident than their male peers: 77% thought the older generation had confidence in their ability compared with 93% of men.

“Are women right to be so diffident, or are today’s young women still tricked by the sort of self-doubt that can undermine everything they could otherwise achieve?,” the researchers asked.

Hall says coping with the dual pressure of sexism and the need to prove oneself as a family member could be “exasperating for women”.

“Though men certainly face the same thing in terms of people assuming they only got the job because of their surname. The advice is, get your head down, do your job and do it well and people will see your value.”

Land of the rising… daughter?

Resistance to women managing the family business persists more stubbornly in some parts of the world. It has been a long-standing trend for Asian families with only daughters to adopt a son with the view to him taking over and carrying on the family name.

The first fourth-generation family member to lead one of South Korea’s top 10 chaebol, Koo Kwang-mo, of LG, is such an example. He is the adopted son of former LG chairman Koo Bon-moo and was groomed to take over, despite Koo Bon-moo having two biological daughters. 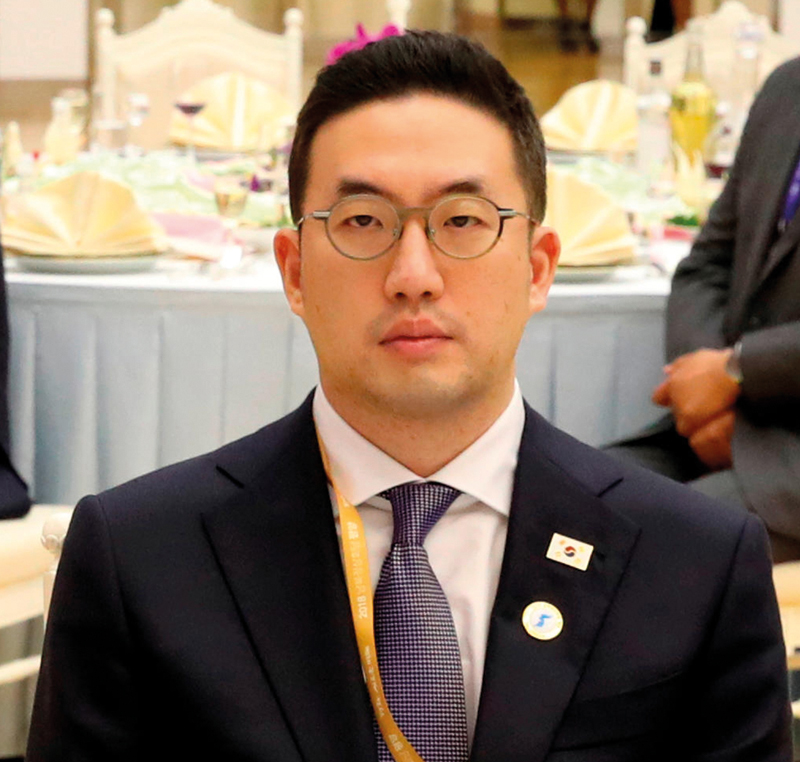 In Japan, 98% of adoptions are adult men aged between 20 and 30, as bosses adopt promising employees. It is estimated that 10% of business-owning families without a male heir adopt one, with Toyota, Suzuki, and Canon among companies to have used this method to secure their next top man.

Allegra Antinori says China has been one of the most difficult regions for herself and her sisters to do business on account of their gender.

“It is a challenging country. With vision, time, and patience, we are trying to build up.”

The Chinese-Filipino Pow family is one that looks to make the most of its female talents.

Philippines-based HS Pow Construction and Development Corporation was founded in 1985 by Harrison Pow, who was soon married and working alongside his wife, who became finance vice president.

The couple wasted no time in grooming their daughter, Harly Pow, to join the ranks, and Harly says she was always encouraged to imagine a career with the family firm in her future.

“I did not feel my family was very traditional compared to my other classmates,” she says.

“The majority of the parents at my school owned businesses or were managing their respective family businesses that were passed on to them, so we were exposed to the business world at an early age.

“For some of my female classmates, it was clear to them that it was their male siblings who would take on the family business eventually.”

She says on a positive note, it gave other young women more flexibility in their careers—“They could be free to choose what they wanted to study in college—and it did not have to be business, finance, or entrepreneurship related. 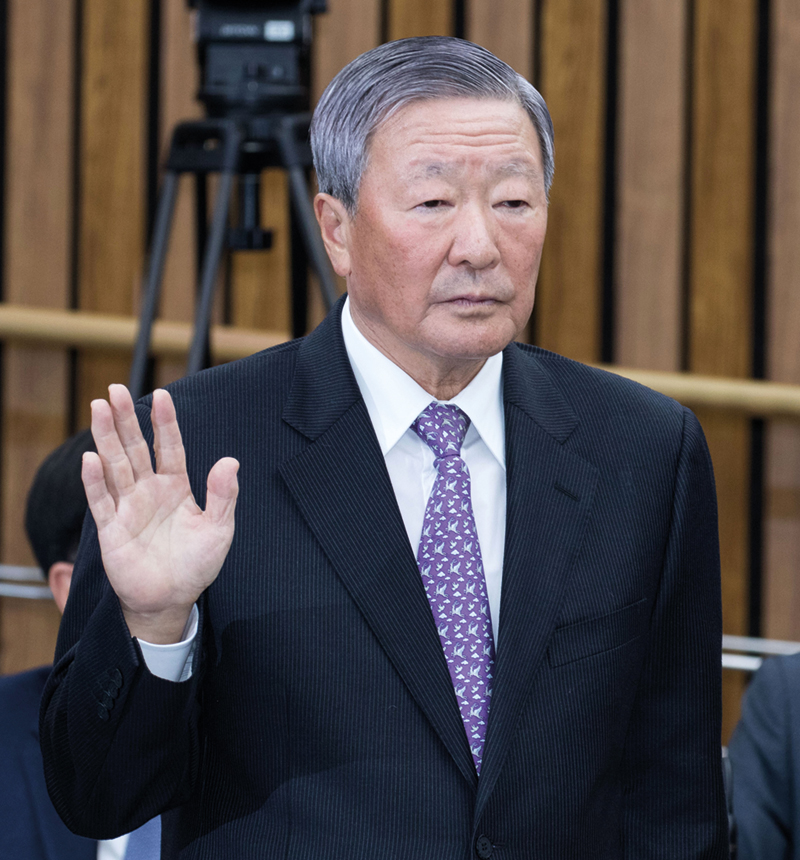 “In my experience, ever since I was young I was somehow trained and groomed that someday I would be interested in our business. In the summertime, I would work in the family business part time—encoding data in the accounting department, helping organise salaries for the employees, joining my dad’s meetings—simple tasks. But still some involvement.”

Harly, a marketing and business development specialist, worked at a large pharmaceutical company for four years after she left university, until her father asked her to return to HS Pow to assist them with a new arm of the business: real estate and property development.

“I wanted to be exposed in a different industry, learn business processes and systems outside of the family business and build my own network,” she says. 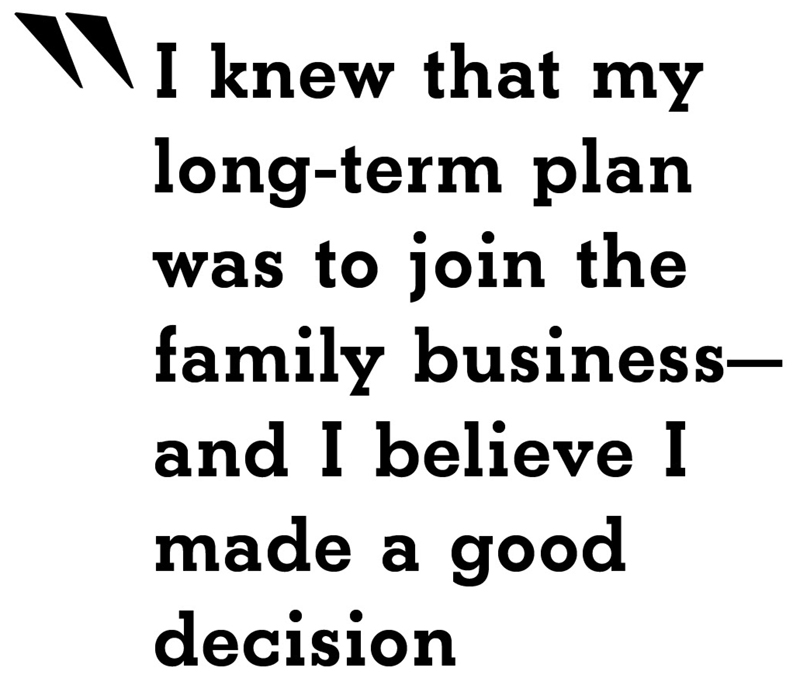 “But I knew that my long-term plan was to join the family business—and I believe I made a good decision as there are significant opportunities in real estate development. We hope we will be able to positively impact the built environment in the Philippines through our projects.”

Harly’s younger twin brothers—John and Jeremy, an architect and a civil engineer respectively, also work for HS Pow, while her youngest brother, Timothy is still at school taking up human resources and organisational development. She maintains she was never treated differently from them growing up, and the only family member who will most likely be excluded from working in the business are those who marry into the family.

“I think one common rule that my dad established is that our husband or wives cannot become too involved in the business. It has to be professionally run to preserve the family unity—and to avoid conflict and misunderstanding.”

Jobs for the girls 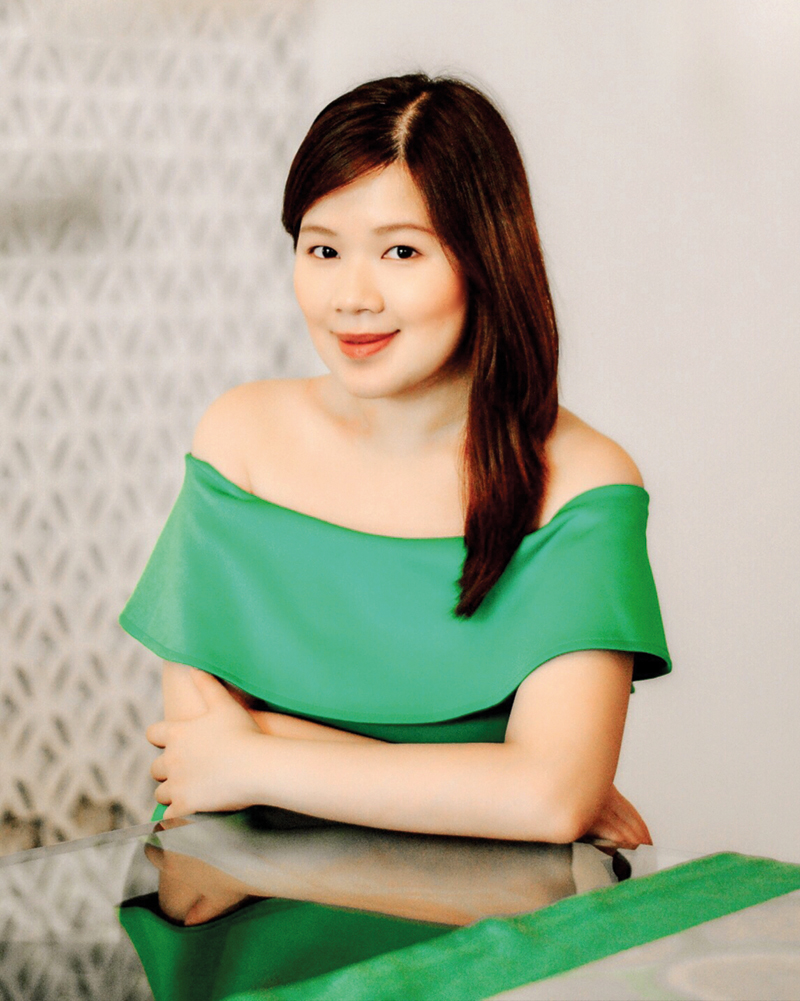 The rising economic clout of women has been one of the biggest societal changes in recent decades, and Fiona Lucas, RBC Wealth Management managing director, says there are clear differences in the way women look at the issue of succession.

A 2018 study conducted by The Economist Intelligence Unit on behalf of RBC asked 1,051 high net worth individuals (502 women and 549 men) about their plans for their businesses and wealth.

In the UK, 42% of high net worth women business owners want to pass their businesses on to their families, compared with 24% of men.

Lucas says in her experience, women are more likely to manage the business with the next generation in mind.

“With women taking increased responsibility, we can expect to see a great deal more female-run family businesses as the next generation step into their predecessors’ roles.” 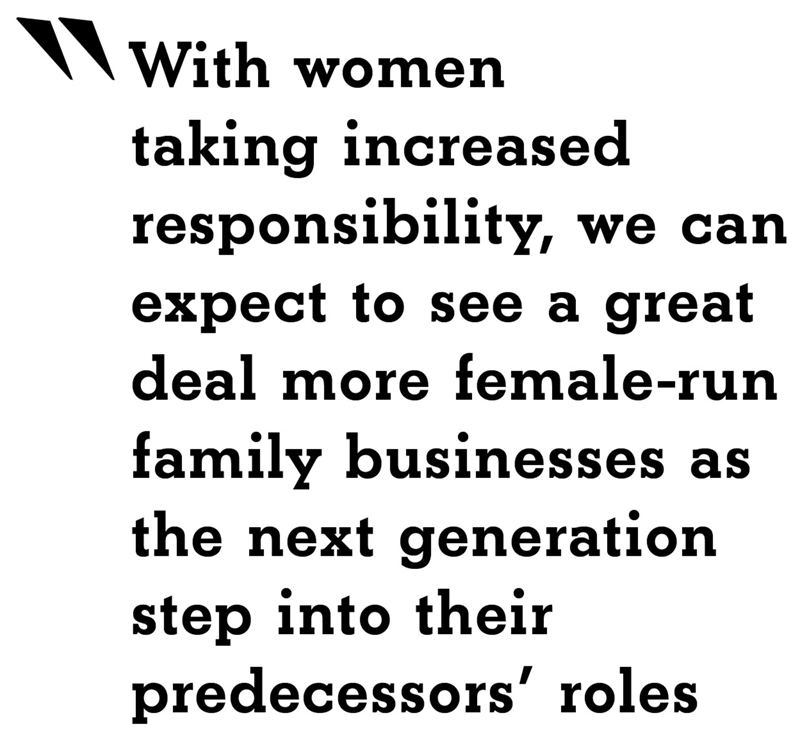 Lucas says the rise of auxiliary industries like impact investing could be partially attributed to women controlling more wealth and the “holistic” attitude they brought to the business realm.

“Before, women would have looked after philanthropic ventures on behalf of their wider families. Now, however, as women are increasingly managing wealth of their own creation, philanthropy is more important than ever as women look to align their business objectives with their personal brand and motives.

“Impact investing is also aligned with their ambitions to leave a sustainable legacy. In this way, ensuring that their businesses give back to the community is instrumental for wealthy women as a means of building the reputation of their business.”