As a boy growing up in the UK, Khaled Saïd loved puzzles, maths and “figuring things out”. His father, Wafic, had made much of his fortune building significant infrastructure projects in the Middle East during the 1970s and 1980s. But Saïd, 38, had always been interested in the portfolio side of Saïd Holdings, which his father founded in 1987. Solving where he could fit into his family’s business was one more puzzle he had to “figure out”.

“I’d always known that my destiny was to work in some way or another with my family. My father had never pushed me but always expressed an interest and desire to find a role which would be complementary for me.”

Fast forward 30-something years and Saïd’s interest in the family portfolio has transferred into a professional career helping other wealthy families navigate the puzzle of financial services through Capital Generation Partners, the multi family office he co-founded. Starting with the Saïd clan as its cornerstone investor, the firm now manages the wealth of seven dynasties.

Wafic was born in Syria but was forced to leave in the 1950s when large parts of the economy were nationalised. As a result the family made much of its wealth in other areas of the Middle East, particularly Saudi Arabia. But Saïd still feels connected to his Syrian heritage, and the war-torn country is still at the heart of much of the family’s philanthropic activity.

“We’d always done humanitarian work there with children with disabilities. This difficult situation has meant that much of the work that we have done in Syria has had to be put on hold because we literally cannot get to these people. So my father has been supporting in other ways which is through registered, organised charitable vehicles like Save the Children, Unicef and the Red Cross as that’s often the only way you can really get in to Syria.”

Saïd says his father realised that he didn’t have a traditional business such as a manufacturing firm, but he took care to structure his various interests like a family company. “We have family structures, but we don’t have what I would call a family business,” he says. This has meant the next generation treated Saïd Holdings like a family business and felt responsible for its longevity.

Saïd’s path into the family business was not mapped out for him. While studying a family business class as part of an MBA at INSEAD, in 2002, he began to consider how he might rejoin Saïd Holdings. “The skill set [my father] had was not necessarily the skill set I had. I was much more interested in the portfolio side of the business. Part of his legacy was a meaningful portfolio and I could really do something in that area,” says Saïd. 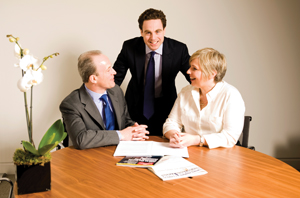 While at Saïd Holdings, Saïd caught the eye of well-know global investment strategist Barton Biggs, who sat on the Saïd family’s board. Urged on by Biggs, Saïd co-founded Capital Generation Partners, along with Charlotte Thorne and Ian Barnard (both pictured right), both of whom were former Saïd Holdings employees.

“Barton in particular was very taken by what we were doing at the firm for my family, so he was very keen that we spun ourselves out. It was fitting because I was at a point where I was looking for something perhaps which was entrepreneurial and also something that was mine in a sense of defining my own career.”

Saïd is very aware of both the opportunity and responsibilities afforded to him by his father and grandmother’s sacrifices, things he says have helped him as he positions his business.

“My father came from a very educated Syrian family. His father was an eminent eye surgeon who went into politics and founded the University of Damascus. So education had always been a very important cornerstone to what my father valued.” Wafic Saïd put his money where his mouth was in 1996, becoming the founding benefactor for Oxford University’s Saïd Business School with a £25 million (€29.5 million) donation.

“My father has always said to me the only things you have in life are your reputation and your education. And those are the two things you carry with you wherever you go.”

What else did his father teach him about business? Decisiveness and consultation were two of his father’s strongest traits, says Saïd, something he’s tried to apply in his business. He strives to provide decisive advice to families, but also providing an environment where the best brains can thrive.

“I like to surround myself with people who are brighter than me in many areas, who are smarter than me or expert in certain topics. In order to do that you have to build the right environment for people,” he says.

When asked about what he thinks is the winning formula to ensure the entrepreneurial spirit is kept alive in family businesses of significant size and wealth, Saïd acknowledges the unintended pressure on the next generation.

“Entrepreneurship can be a little bit daunting to [people] who come from successful families … I don’t think it is a natural extension of families of wealth,” he notes.

Although Saïd’s own business is still relatively young, and his own children are all under six, it’s natural for him to think about the lessons he’d like to pass on to them.

On a more serious note, Saïd says the tough thing about entrepreneurs in families is it is emotionally very hard to fail as a family member when the previous generation was so successful. “You have to try and create an environment where people try things, and they might fail and that’s okay. That’s something that I will instil in my children,” he says.

Parenting is one more puzzle for Saïd to solve, but if he is able to inspire the spirit of entrepreneurship in his children, the name Saïd is likely to be common in the world of business for a few more generations to come.