Badr Jafar has had a long day. Dressed in immaculate business attire, his tie is askew and, although it is mid-afternoon, he’s still got a packed schedule for the rest of his day. In the evening, he flies to New York for a meeting at the United Nations about the Pearl Initiative, the private-sector partnership he set up to enrich Gulf corporate accountability and transparency.

Badr, 34, and elder brother Majid, 37, are – despite their relatively young age – becoming pillars of the international establishment. One minute, Badr pops up in meetings with Russian president, Vladimir Putin, the next in Morocco, producing a charity single – Tomorrow/Bukra with Motown legend, Quincy Jones. A picture of Majid meeting English royal Prince Charles sits on the shelf in his office.

This ability to capitalise on new global opportunities for the family’s Sharjah-based petroleum-to-ports conglomerate is something the brothers are focused on, but none of this would have been possible without their father’s foresight. In 1971, founder Hamid Jafar executed a management buyout of Buttes Gas & Oil Co, of which he was representative in Sharjah. At the time it held a Sharjah-sanctioned oil concession offshore. The purchase made Crescent Petroleum the first independent and privately-owned Middle Eastern petroleum company.

“There is tremendous opportunity in the region despite the complexities that exist from a socio-political standpoint today. We perceive risk differently to how our international competitors would,” says Badr.

Badr is managing director of the Crescent Group, the holding company that oversees the family’s business shareholdings. Majid is chief executive of Crescent Petroleum, its original oil and gas arm, while Badr is president, responsible for all business development in the company, as well as chief executive of Crescent Enterprises, which covers all the group’s non-oil and gas companies and investments. Hamid is the chairman of the board of the Crescent Group of companies. 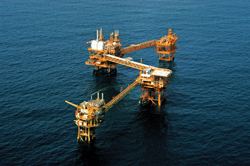 Crescent Petroleum remains the oldest family-controlled hydrocarbons business in the UAE. It is the largest shareholder in public company Dana Gas, which has exploration and production assets throughout the Middle East – nimble management has allowed it to beat international oil companies to several finds.

“Our competitive advantage is not competing with the majors. We tend not to find our sweet spot in well-developed markets, like Abu Dhabi, or Saudi Arabia. We’ve been more successful in places like Egypt, Yemen and Iraq, where the majors follow a few years after we enter,” Badr says.

Crescent Enterprises’ portfolio encompasses a wider sweep. Gulftainer, a ports and logistics company, owns and operates terminals in Sharjah and Khor Fakkan in the UAE, and in the past five years has fanned out with projects in Iraq, Saudi Arabia, Lebanon, Russia and Brazil. Momentum Logistics owns one of the largest heavy transport fleets, as well as a sizeable inland container depot, in the UAE. Crescent’s private-jet charter company, Gama Aviation, operates globally but is based at Sharjah Airport.

“Gulftainer is today the largest privately-owned port operator in the world. Apart from port operations, we now handle third-party and fourth-party logistics, which is the whole suite of logistics services,” he says. “In Crescent Enterprises, our role is not just to go and to buy sit-and-hold investments. We roll up our sleeves and operate,” says Badr.

IRAQ’S UNFULFILLED POTENTIAL
Crescent Petroleum has been involved in the South, or Iraq “proper,” excluding Kurdistan, for 20 years, but has been constantly held back by the war and political chaos there. The brothers themselves have Iraqi roots alongside their Emirati nationality, and they are confident the country can realise its potential.

Crescent Petroleum and Dana Gas, in which Crescent Petroleum owns a 21% stake, jointly entered Kurdistan, where they recently celebrated five years of operations. In mid-2009, the companies invited in two new partners, OMV of Austria and MOL of Hungary, and the new consortium, Pearl Petroleum, now produces natural gas from the Khor Mor and Chemchemal gas fields to supply Kurdish power stations.

“In Kurdistan, we’ve invested over $1 billion and have produced 100 million barrels of oil equivalent. Current production is about 80,000 barrels per day. The gas we’ve produced has enabled stable electricity supply for almost the entire Kurdistan region almost 24 hours a day, in stark contrast to the rest of Iraq, which still languishes at around two hours a day,” says Majid.

Both brothers bemoan the failure of the south to progress to the stage where potential oil output is realised. “There is no oil and gas law in the south. Many of the majors are going up to the north. There is no legal or proper commercial framework for proper operations in the south yet,” says Badr of the poor management of resources in southern Iraq. “You can have all the resources in the world. If you don’t have the management to go with it, you’re not going to do anything. Nothing serious is going to happen.”

Management of the oil sector is not Iraq’s only problem. Institution building has failed and corruption is rife. Mismanagement in Iraq has also had detrimental social effects, says Majid. The government has failed to promote the private sector, but protects insiders, mainly public sector workers. He believes hundreds of thousands of youths are stuck outside the jobs market, unable to get in.

“The big challenge in this region politically, economically and socially is youth unemployment,” says Majid. “It drove the Arab uprisings three years ago, and will continue to cause unrest if left unaddressed. The number one issue is really job creation. Education systems in many parts of the region are weak, involving rote learning and no creativity or critical thinking. Many countries still have education systems where people are being trained to be civil servants instead of functioning members of the business community.

“I’m not seeing many of my generation starting new businesses the way our fathers and grandfathers did. A public sector job is the preferred employment avenue and the only one to make you socially eligible for marriage. The private sector is considered unstable or even suspect. That’s a pity.”

“Global statistics show that only 30% of family businesses survive the transition between second and third generations, simply because of being unprepared. Link those facts together and that means potentially a huge chance of destruction of value over the next 10 years in the Arab world if we don’t sort out our corporate governance systems. Simply put, we could have about $700 billion of assets that are at risk in the region over the next 10 years,” adds Badr.

Majid explains the region’s development after the Second World War. “Even in the Gulf, there are differences in how developed family businesses are. Saudi Arabia saw its oil boom in the 1950s, and [its families] are now in their third or fourth generations, which can mean dozens of cousins. The UAE started in the 1970s, and tends to be second-generation. Qatar is even later in some cases; it was the 1980s and 1990s before the Qatari boom got going.”

Litigation is a fact of life, especially in Saudi Arabia, where splintering of family concerns causes a contentious environment today, Badr underlines. Ownership, entitlement, and dividend policy all cause disputes. “Over 70% of families in Saudi Arabia have at least one family dispute in court. The most difficult place to resolve these issues is in court. It’s always a lose-lose [situation], especially here, but even globally. You just create more polarisation within families if you go to court.

“If you put that in the context of the fact that in the region there is huge youth unemployment, up to 60% in some places, and the fact that we have to create bigger businesses to be able to absorb these people – over 200 million jobs over the next 20 years are needed.”

If the region fails to manage the coming generational transfer of family businesses and also fails to generate jobs, Badr thinks the Gulf could be facing a major socio-economic crisis.

GULF GOVERNANCE
The Jafars are also getting involved in reshaping corporate governance and the engagement of women in the workplace in the region. A recent study conducted by PwC in association with the Pearl Initiative, the non-profit think-tank founded by Badr with the United Nations Office of Partnership to improve regional corporate governance drew some telling conclusions. It identified several factors hampering access to capital and talent. Succession and the management of conflict were the leading issues of concern to Arab families. Family communication, anti-corruption, and best-practice all need tackling too.

“We have hierarchical structures here in our region that are more prominent than some other parts of the world. If the problem [of governance] isn’t addressed, that’s huge value at risk. That’s value we really cannot afford to lose in the region. We need to be creating value.” Badr’s work with the Pearl Initiative, along with his other philanthropic ventures, saw him being awarded Philanthropist of the Year at Campden Wealth’s Middle East Philanthropy Awards, in December.

The gender imbalance in the workforce is another big concern. “Women in our region are better educated than our men. But that doesn’t translate into the workforce, or the board. So that’s a major area that needs progress. I’m not talking about education. I am talking about representation. Dubai and the UAE have gone ahead with more quotas than most European companies. The UAE now requires that 20% of a company’s board are women,” says Badr.


PROFESSIONALISM AND THE FAMILY BUSINESS
The brothers are working hard to strengthen the company’s governance structures to ensure its long-term sustainability. Majid says he expects the process of expanding the group board with non-family members, as well as putting in place a family council, to take five years. “Family corporate governance and family constitutions take much longer [to draw up] than you think, but the process is more important than the document at the end in many ways.”

They are in the process of updating their father’s management style with a more corporate framework. “The reporting relationships were direct and there wasn’t an executive committee and processes. That’s quite normal all over the world for the management style of a first-generation founder entrepreneur,” says Badr. There are now six on the Crescent Group board, four family directors and two executive directors – the group director of business services and the chief financial officer.

Equally important is the role of women in the family. Badr refers to his mother as “company CEO”, “She is our chief emotional officer!”. Majid says the role of his sister is just as important. “My sister trained as a lawyer. Apart from her legal skills, she brings her female perspective. We’ve been blessed with an extremely close relationship with our father. Luckily we have in [him] somebody who has always put us before the business. Also he doesn’t define himself by the business. He has an identity and sense of self that are separate from the business. That’s very important.”