Inheritance tax rebate for assets that decline in value after death

With the spread of Covid-19 bringing the UK housing market to a standstill and shaking financial markets across the world, families who have lost loved ones leading up to the outbreak of the pandemic, could be seeing some of their assets plummet in value. If inheritance tax has already been paid on those assets on the basis of their higher values in the pre-Covid world, an inheritance tax rebate could be due. With the spread of Covid-19 bringing the UK housing market to a standstill and shaking financial markets across the world, families who have lost loved ones leading up to the outbreak of the pandemic, could be seeing some of their assets plummet in value. If inheritance tax has already been paid on those assets on the basis of their higher values in the pre-Covid world, an inheritance tax rebate could be due.

Investments qualifying for the relief include listed shares and securities, UK government stock and holdings in unit trusts. Shares in unlisted companies or those listed on the Alternative Investment Market (AIM) are not included.

The same relief applies to certain trusts where a beneficiary who had a "life interest" and right to income has died. If inheritance tax was paid on the trust assets at the beneficiary's death but those assets have, within 12 months, declined in value and have been sold, the same rebate claim can be made by the trustees. 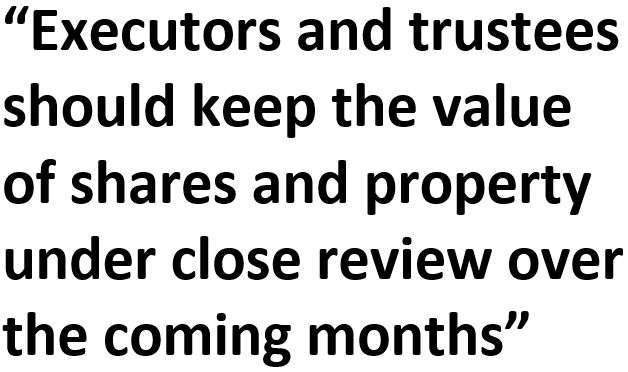 By way of example, one of my clients, the head of a large UHNW family, died in December 2007 at the start of the global financial crisis, holding portfolios of stocks and shares worth just over £12 million ($14.8). Inheritance tax was paid on the value of the investments at his date of death in December, but by October 2008, Lehmann Brothers had collapsed and the FTSE100 had plunged to its lowest levels since 1987, prompting mass selling on a global scale. The executors decided to cash in on a large proportion of the investments before values fell still further. We were successfully able to substitute the sale values for the probate values, and saved the family nearly £1 million ($1.2 million) in inheritance tax.

"Loss relief" is also available for land or property forming part of a deceased person's estate, provided it is sold within three years from the date of death. The lower sale value can be substituted for the higher probate value, although the loss must be at least £1,000 ($1,233) or 5% of the probate value (whichever is lower). As above, the same rules apply to property within trusts where inheritance tax has been paid on the death of a beneficiary with a lifetime right to income.

If the property has already been transferred to the beneficiary entitled to it under the deceased's Will, a claim will only be possible if the inheritance tax on that asset was paid for by that beneficiary; i.e. they had liability for the tax under the Will. The same principle applies to shares. Generally, it is the executors who have liability for the tax, but there are situations in which beneficiaries can claim. I acted for an estate with a large amount of land and property in Cornwall and one of the investment properties, located in Boscastle, was passed to a specific beneficiary under the Will. That beneficiary paid the inheritance tax on the property. The deceased died in 2003 before the 2004 flash floods in Boscastle and although the property was not badly affected, its value dropped in the year following the floods. The beneficiary decided to cash in and reinvest in a different part of the county. We were able to claim loss relief and the beneficiary was reimbursed some of the inheritance tax paid on the property.

Executors and trustees should keep the value of shares and property under close review over the coming months. Assets that drop significantly in value can be sold and tax relief claimed, but this needs to be balanced against the loss of potential income. The alternative would be to retain the asset and gamble on a market recovery in the not too distant future; although it would be sensible for executors/trustees to agree a cut-off point with the ultimate beneficiary. A third way, for shares in particular, is to take a hybrid approach and sell some investments whilst retaining others.

Whichever of the options is selected, it is key for the executors/trustees to communicate with the ultimate beneficiary involved. If the beneficiary is minded to retain the investment for the long term, they are likely to favour sitting on the asset and riding out the storm; whereas beneficiaries who have a need for cash and are likely to sell the asset in the short term will be more inclined to favour selling before the price drops any further.

Either way, with the strict timescales involved, the need for executors and trustees to act quickly where the relevant deadline is approaching (12 months in the case of shares) could be vital. In a time where belts are increasingly going to be tightened, a tax saving is not something to be sniffed at.

Camilla Wallace
Partner and Head of the Private Client Group

Camilla Wallace is a Partner and Head of the Private Client Group at Wedlake Bell. Camilla advises high-net-worth individuals, both UK and non-UK domiciliaries, on estate planning to mitigate the incidence of inheritance tax and control the devolution of estates using lifetime gifts, trusts and tax-efficient wills. She also provides advice to clients on capital gains tax and income tax mitigation strategies as regards lifetime tax planning.