High Flyers: Why women are leading more enterprises than ever before

Statistics increasingly tout the number of women being considered for leadership roles in US family businesses. But should family businesses be patting themselves on the back for gender equality just yet? As a child, Lisa Ingram enjoyed visiting her father at work. She and her two siblings would often spend time in the headquarters of White Castle, a fourth-generation chain of fast food restaurants based in Columbus, Ohio. While their father, Bill Ingram, then the company’s chief executive, was busy working in his office, the siblings would have a snack in the cafeteria or help the company’s receptionist operate the switchboard.

Yet, growing up, Ingram never thought she would join the family business, let alone become the company’s first female president and chief executive. “Being the boss wasn’t my first desire,” she says. In 2000, after a stint in the computer industry, she started working at White Castle. She quickly rose through the ranks and was appointed president in 2013 and chief executive in December of last year, finally succeeding her father at the helm of the 95-year-old firm with annual revenues of $489 million. 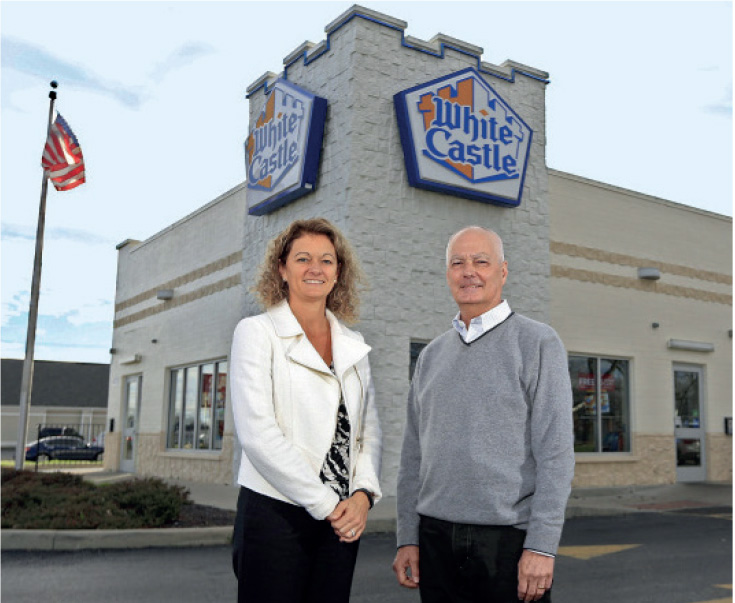 Like Ingram, several women in the US have taken over large family-owned companies in the past few years, including Abigail Johnson, Allison Moran Bolch and Laura Shapira Karet, who became chief executives of Fidelity, RaceTrac Petroleum, and Giant Eagle, respectively (see box out below). A survey last year found that 78% of family businesses in the US were considering a woman as the next chief executive. The same research, which was carried out by the Cox Family Enterprise Center at the Kennesaw State University, Georgia in the US, together with consultancy EY, also found that the average family business in the US was preparing more than two women for their most senior management roles. And 58% said women family members had grown more interested in joining the firm in the previous three years.

“Women are considering the family business in a way that I don’t think they had before,” says Amy Katz, founder of US-based Daughters in Charge, an online community for women involved in family businesses. “I’m talking about women who are career-minded, who are choosing and seeing themselves as leaders within their family businesses.” This isn’t to say that in the past women did not play an important role in US family businesses – they always did, whether it was working at the firm, educating the next generation, or leading the family’s philanthropic efforts. But for a long time, women were excluded from the boardroom and rarely allowed to participate in decision-making. Now things are starting to change: the average family business in the country employs three women in top managerial roles today and has 2.4 women on the board of directors, representing a quarter of its board members. In comparison, women only held 17% of board seats in Fortune 1000 companies (which for the most part are non-family firms) in 2014.

So what is it that makes family businesses better suited to promoting and giving opportunities to women? Joe Astrachan, professor of management and entrepreneurship at Kennesaw State University, puts it simply: “If you’re family, you’re family. If you’ve gotten to the point when you’re educating your family members equally – that is men and women – then there shouldn’t really be a problem in promoting them.” 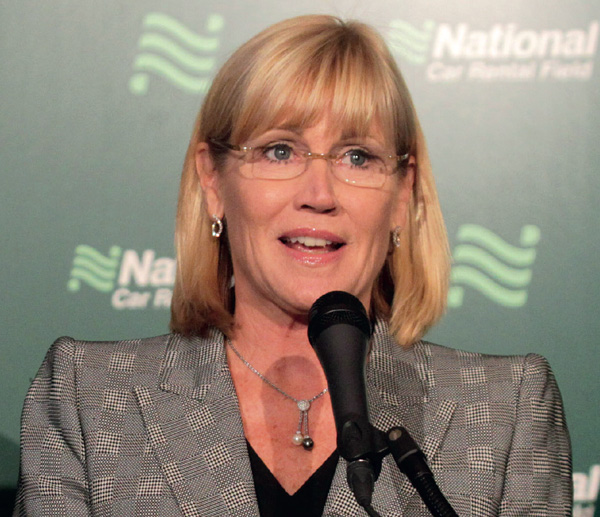 But it’s not just female family members who are being promoted. Family businesses are advancing women from outside the family at an even faster rate - of the (on average) three women family firms employ in top managerial roles, two are non-family members. One example is Pamela Nicholson who in 2013 became the first female and the first non-family chief executive at Enterprise Holdings, the biggest car rental group in the world. Third-generation Chrissy Taylor was also introduced to the C-suite in February when she was appointed chief operating officer.

Family businesses have a big advantage on their side: time. While the average tenure of Fortune 500 companies’ chief executives is just under seven years, family business leaders often hold their job for 20 years or longer. This means they can take the time to decide who is the best person to lead the company, groom the next leader, and ensure they are fully prepared. “If you have a longer-time horizon, you get ample time for anyone, including a woman, to really grow the skill-set that is needed,” says Carrie Hall, Americas leader at the EY Family Business Center of Excellence. “So that when she is moved into that position, she is ready and able to be more effective right off the bat.” This, in turn, might help combat prejudice that women are not fit for top leadership positions.

Another significant factor may be work flexibility. Women who work with their families are more likely to enjoy flextime or work-from-home arrangements after they have children. (Maternity is still the main reason women leave the workforce in the US). “The work/life balance is always a challenge,” says Ingram, who has four children. “I have a very, very supportive husband and a very good support network – and that really helps.” When women do reach the top, they are likely to implement policies that keep that in consideration. Ingram, for example, says that what distinguishes her from White Castle’s previous chief executives is her focus on ensuring employees enjoy a better work/life balance. “[It’s] making sure that we are learning about the whole team member, and not just the team member that shows up to work for us for eight hours. That we understand what’s going on outside of their life as much as they want to share, and that we’re supportive of those things as well.”

Having started employing and promoting women earlier than other companies, family businesses have also encouraged other talented and successful women to follow suit, thus creating a virtuous circle. “Just having the role model there increases interest,” says Hall. “When you have women already in positions of leadership – as family businesses do and really have for a long time – it makes other women look and say, ‘You know what? If she can do it, I see a place and way that I can do it as well.’”

However, recent progress shouldn’t make family businesses in America feel satisfied with the current situation – family firms still have a long way to go before they can achieve full gender equality. The Kennesaw State/EY research, for example, found that women represented half of the board members in only one in ten family businesses in the US. And if 78% of family firms were considering a woman for their next chief executive, the same figure dropped to 17% among family businesses that were planning a succession in the immediate future. It’s a cultural problem that family businesses have in common with the rest of the business world, where women are still a minority. “The world is still becoming accustomed to having women leaders,” says Katz. “Having a son take over from the dad is very much expected, or is certainly not a surprise. Having a woman enter or re-enter can be a bit more of a surprise simply because it hasn’t been the norm.” Astrachan expects it will take another 15 to 20 years for family companies in America to see full gender balance at the top management level.

But if they want to encourage more women to bring their talent and expertise to the family business – something that has been found to increase profitability between 6-8% with the right factors – family businesses should introduce daughters from an early age to the possibility of having a successful career within the firm. Then they will have a good pool of talent to promote more daughters and granddaughters to the top. As Katz says: “All those messages that sons have gotten [in the past], I think can be given to daughters now.” 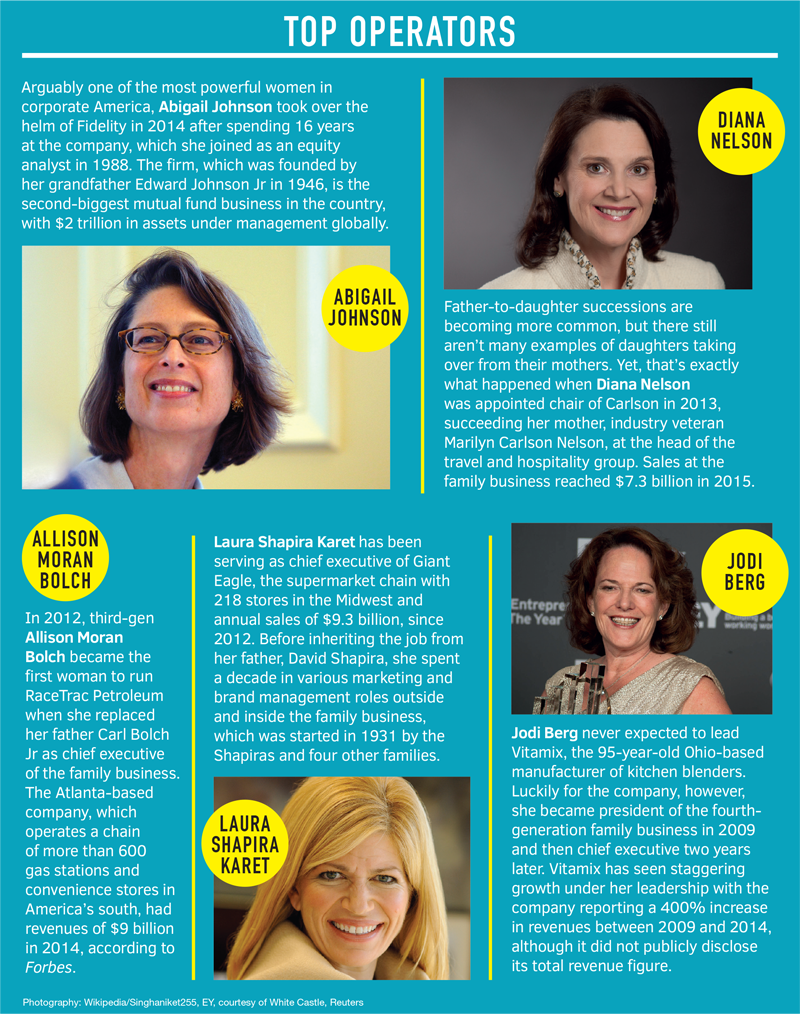 Giulia Cambieri is a writer for Campden's Wealth publications, CampdenFB and CampdenFO. She graduated in 2010 with a MSc in Theory and History of International Relations from London School of Economics.