The Greatest Row on Earth

The family-run firms of Savile Row are an object lesson in how to update a centuries-old brand. Campden looks at the family business keeping classic tailoring on-trend. If you’d walked into the upstairs offices of Savile Row tailor Henry Poole & Co a few weeks ago you’d have been met by a plaster model of the seated figure of the late Emperor Hirohito of Japan, completely naked except for a pair of smartly polished black City brogues.

His Imperial Majesty was waiting to be measured for a new suit ready for his appearance in a new branch of Madame Tussauds in the Far East. It’s all part of everyday life for the celebrated tailors, which was founded in 1822 and dressed the real life emperor, along with Edward VII (see panel), Buffalo Bill and Charles Dickens. 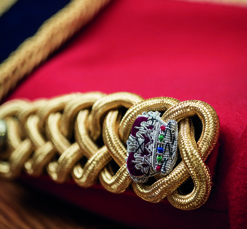 “We’re constantly finding famous people that we’ve dressed over the centuries,” explains Simon Cundey, the seventh generation of the family which founded and still runs Henry Poole, as he points to huge leather bound books containing measurements, cloth details and delivery dates. Next to them are row upon row of brown paper patterns for current clients and racks of jackets and trousers, tacking stitches and linings on display, ready for first fittings. Alongside them sits a magnificent piece of military finery in brilliant red fabric with lashings of gold braid (pictured, right).

Modern business
If it all seems too quaint and quirky for words, then appearances are deceptive. Savile Row might be the most celebrated address in menswear with many of its “houses” in the business making suits for gentlemen for centuries, often run by the same families – and yet it has a new spring in its well-shod step.

Over the last few years cobwebs have been blown away from ancient cutting rooms, a professional body has been formed and there has been a surge of interest among students wanting to be apprentice tailors that has been matched by a growing awareness amongst younger men keen to know what this bespoke suit business is all about.

“We’re certainly seeing younger men come in to the shop now. They’ve often heard of Savile Row and now, of course, it looks more accessible and it’s becoming known to a wider audience,” says Simon Cundey (pictured,left). “But it’s also very nice for us as a family firm, to see our customers introducing their sons and grandsons. It’s the same with our staff – as a family firm we’re more keen to look after them, I think.” Two brothers joined at the age of 14 and left at 65.

As well as what marketers call “the flight to quality”, Simon Cundey’s father, Angus, links the renaissance with, ironically, an effort by landlords to put up rents around five or six years ago. “They wanted to get rid of us and our workshops but one day I was standing outside our shop with one of their representatives talking about how disastrous it would be when a group of tourists came by and started taking pictures”, he remembers. “Suddenly our landlords realised quite how unique and valuable we are and they relented.”

This, in part, led to the establishment of a professional body, Savile Row Bespoke. It now estimates that sales among its members are up 10% like for like from last year, on average. Even the look of the street is subtly different, as tailors have opened up their shops to make them more inviting. Savile Row realised that it was almost unique in the clothing business with manufacturing taking place on the same premises as sales.

On display
So, they’ve put their tailors and cutters on display, having hidden them away in attics and basements for years – a trend similar to restaurants where diners can now see their food being prepared. Most days groups of tourist can be found looking in at the cutting, stitching and tailoring that takes place.

There is a certain fascination in seeing a jacket half-made or a tailor hand-stitching a piece of fabric while another expertly irons one pin-striped leg of a pair of trousers. From irons to sewing machines and scissors to measuring tape, the age-old tools of the tailoring trade are casually on display to those peering into the workshop of Henry Poole or indeed of Huntsman, just a few doors down the street. If retail is increasingly about theatre, then Savile Row already has one of the greatest shows on earth.

The houses are constantly innovating with new fabrics, especially lighter, more crease-resistant versions that appeal in particular to new customers from Asia. As well as new customers, there are new people working on the Row. A collaboration with Newham College in North London has seen huge growth in the number of apprentices including a growing number of women training to be tailors and cutters.

Kathryn Sargent was head cutter at Gieves & Hawkes and started her own business in 2011. “People are still slightly surprised to find a female tailor but there are certainly more of us around these days,” she says. “I studied fashion but then went into tailoring because I didn’t want to get swallowed up by a giant fashion house. The great thing about bespoke tailoring is that you get to meet your clients and to talk to them in person about what they’re buying.”

Another woman in what was previously an exclusively male world is Anda Rowland (picture, left), who arrived at Anderson & Sheppard in 2005 from Parfums Christian Dior in Paris. Previously owned by her father Tiny Rowland and currently chaired by his widow, the firm, which was founded in 1906, is now expanding cautiously after seven years of consolidation.

“Whereas tailoring was once considered to be a dying art, we now have six apprentices and at least 10 enquiries a week from potential trainees,” says Anda Rowland. “My father loved this business. I also saw how he loved having a suit made. We’re seeing new customers too, from Russia and India, for instance. They appreciate the age-old skills that we practice here.”

Another well established family firm which has recently returned to the Row is Dege & Skinner. “We’re seeing more customers come through the door because they’re realising that having a bespoke Savile Row suit made for them really is a luxury experience,” says William Skinner (pictured, right), the fifth generation of his family in the tailoring business.

The message about this centuries-old tradition is being conveyed through modern media. “More firms are using websites and social media now to reach new audiences,” says Skinner. They’re also becoming more business focused, while keeping the ethos of a traditional, luxury business where the customer is made to feel king, he says.

The arrival of Abercrombie & Fitch’s children’s store on this historic street has prompted much amused comment in the media but on the Row it’s actually met with less shock and outrage and more of a sense of disappointment. “This street isn’t about fashion and labels, it’s about pure bespoke tailoring and that’s very different,” says one tailor.

Hipper tailors
For years the western side of Savile Row has been home to younger, hipper tailors. One of these is Mark Marengo. Ten years ago he wouldn’t have been interested in Savile Row but now that has all changed. A fledgling family business, the shop – with its blend of brightly coloured pieces and strikingly modern décor alongside the traditional tailoring patterns and half finished jackets – is managed by Neil Marengo, Mark’s brother.

“It’s important for us to be on the Row now,” he says. “We were made to feel very welcome here. There’s a greater mix of customers these days but nowhere else do you get the same passing trade – men come here to by really good British suits whereas somewhere like Bond Street is about international labels. Also, Savile Row is more about longevity and we have long-term ambitions as a family business here.”

The Row has been cool before, of course – during the 1960s rock stars decided that, along with a Rolls Royce, a bespoke suit showed that you’d both joined the establishment and taken the mickey out of it. At the opening party for tailor Tommy Nutter’s shop in 1969, for instance, Mick Jagger mingled with the Duke of Bedford. Now a new generation is discovering Savile Row, proving that styles might come and go but quality and attention to detail never go out of fashion.

Tux break
Over the Christmas party and charity ball season many men will have dusted off their tuxedos. But how many know its history? “When he was Prince of Wales, Edward VII wanted something easier to wear and less formal than the standard court dress of white tie and tails, especially at Sandringham,” explains Simon Cundey. “So in 1865 he came to Henry Poole and we created a jacket for him which was elegant but had a higher front and didn’t have tails.”

An American, Mr James Potter, was invited to dinner with the prince (who, it’s said, was very taken by Potter’s beautiful wife, Cora) and was so impressed by this new form of eveningwear that he ordered one himself. When he wore it to an event at the Tuxedo Park Club in New York it created something of a sensation and the Tuxedo was born.

Edward VII wouldn’t be photographed in his “tux”, as he felt it too informal to be seen in. “It would be like seeing Prince Charles in a track suit,” says Simon Cundey.