It’s difficult to resist the romance of owning a vineyard and producing your own vintage – who can? So as the number of wannabe international vineyard buyers soars, what tips can the experts suggest about buying into bordeaux or the mistakes not to make in napa? It’s difficult to resist the romance of owning a vineyard and producing your own vintage – who can? So as the number of wannabe international vineyard buyers soars, what tips can the experts suggest about buying into bordeaux or the mistakes not to make in napa? Edward Russell-Walling reports

Blending property and lifestyle with a love of good wine, vineyards are the quintessential passion investment. But the emphasis should be on the word ‘passion’. You can make a small fortune by investing in a vineyard, so the saying goes, but you need to start with a large one. 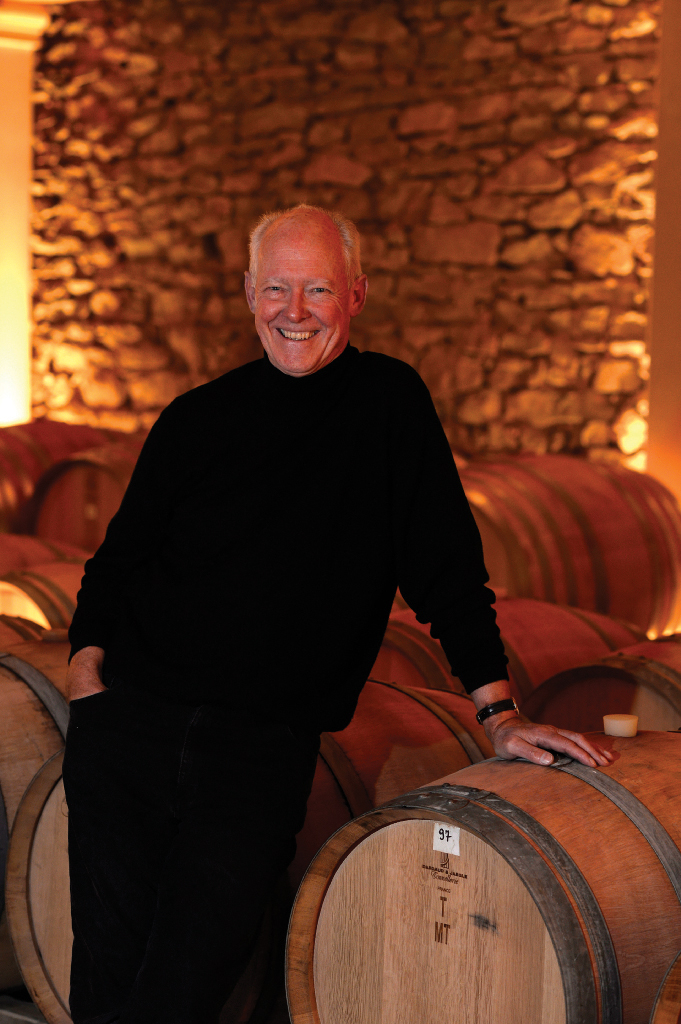 This hasn’t dimmed their popularity with wealthy oenophiles. The way Graham Nutter (pictured right) came to own a French vineyard and 11th century chapel was, he believes, fairly typical. When Deutsche Bank bought the investment management firm where he was senior partner, he got a “fat” cheque. “I am passionate about wine and making my own was something I had wanted to do for years,” he says.

So in 2001 he bought Château Saint Jacques d’Albas, a Minervois (Languedoc) estate with 29ha of vines north east of Carcassonne. He put in €1 million ($1.14 million) up front and has spent “millions” since, creating an underground cellar, a tasting room and concert venue, restoring buildings that were in a sorry state. It took 12 years to complete the renovations.

When he bought the estate, all the wine was sold to the local co-operative. With expert help he has transformed the vineyard, replanting better clones and introducing good soil management. The château now makes its own award-winning wines – three reds, a white and a rosé. 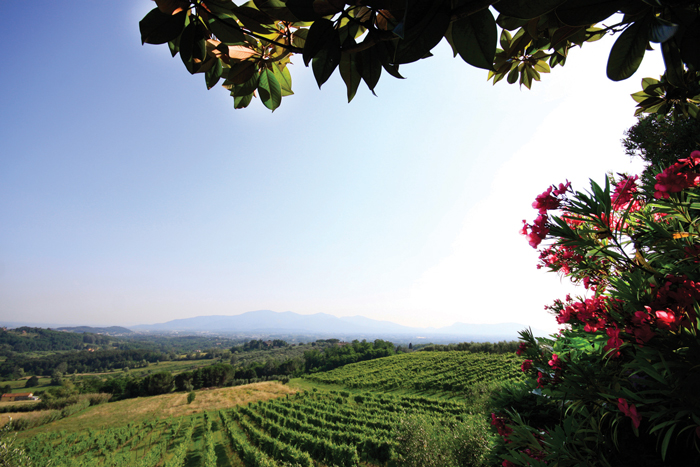 A good wine, they say, is made in the vineyard, not the cellar. But that’s the easy bit, Nutter reckons. “Selling is the hard part,” he says. “If you are buying a vineyard in France, it’s a very competitive market, where individual consumption is going down every year. So you must orientate yourself to exports.”

Wine consumption is expanding in the US, northern and eastern Europe and in Asia, which makes them more receptive markets. But developing exports takes longer and means Nutter has to travel. “I’m the marketing guy,” he says.

So Nutter is living the dream. He is making very good wine and is successfully exporting it to 13 countries, including the US, Japan and China. Is he making any money out of it? No. “The wine is popular and has a good reputation, but the sting in the tail is that people are not prepared to pay for it,” he says.

An American associate once told him his wine was so good that, if it was from California, they could sell it for $35-$40 a bottle. Since it hails from Minervois, $15 is the limit. Yet costs in France keep mounting up.

None of this gives Nutter sleepless nights, and he is obviously having the time of his life. His advice for anyone who wants to do the same is not to spend everything on the initial purchase. Upgrading, refurbishing and replanting can cost as much again, and then it will be three to four years before the new vines produce viable grapes. And while debt is commonplace in the real estate market, Nutter doesn’t advise it with vineyards. “Land values can fluctuate and success in selling the wine can be variable,” he notes. “Many a vineyard has gone down by taking on debt which it can’t service and in four or five years the bank takes over.”

If making money is the object, bigger, established vineyards in a more prestigious location are more likely to generate satisfactory, if not stellar, returns – perhaps 5%. That’s because they will, of course, cost somewhat more. Minervois vineyards are priced at around €15,000 per hectare, before you have paid for the house. In Pauillac, generally France’s most expensive appellation, the price is closer to €2 million per hectare. Saint-Emilion Grand Cru vineyards, whose prices have been bid up by Chinese buyers (see box), have been selling for €1 million per hectare and, when Château La Clotte was sold to a French winemaking family recently, were said to have been more than €3 million per hectare.

Vineyard prices and house prices are separate issues. “Châteaux and mansions in the Bordeaux area or Dordogne are not that expensive, because there are a lot of them for sale,” says Noël Castinel of specialist vineyard estate agency Vinea Transaction. “In Provence they are much more expensive as there are only a few available. Vineyards, however, are much more expensive in Bordeaux than Provence.” 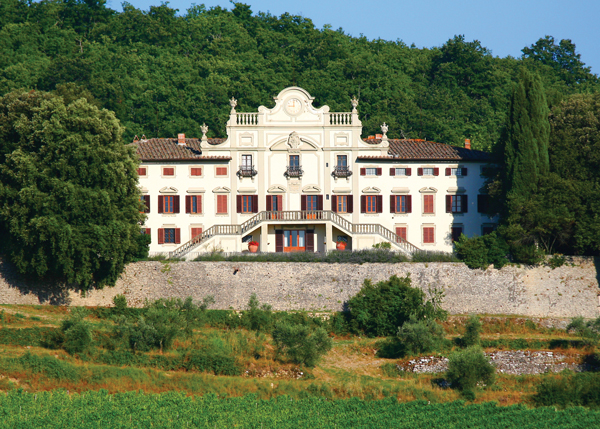 Italy is the other enduring European destination for wealthy would-be winemakers, though buyers need to choose which part of the package they care about most. “In France, lovely vineyards often come with a lovely Château,” says Rupert Fawcett, head of the Italian department at estate agents Knight Frank. “In Italy, you get one or the other.”

Fawcett adds that turning a vineyard into an on-going business is not for the faint-hearted. Looking for a ‘hobby’ vineyard to have some fun and give wine to your friends is one thing. “But to do it commercially is expensive and you need to have your eyes wide open,” he says. “Not many make great returns so you need an element of passion.” If you want the vineyard to wash its face, he adds, buy in a well-known area.

In Chianti, which is universally recognised, you can buy a manageable vineyard making decent wine for €5 million to €10 million, Fawcett says. Prices in top-drawer Brunello di Montalcino are “very punchy” and can be more than €400,000 per hectare. 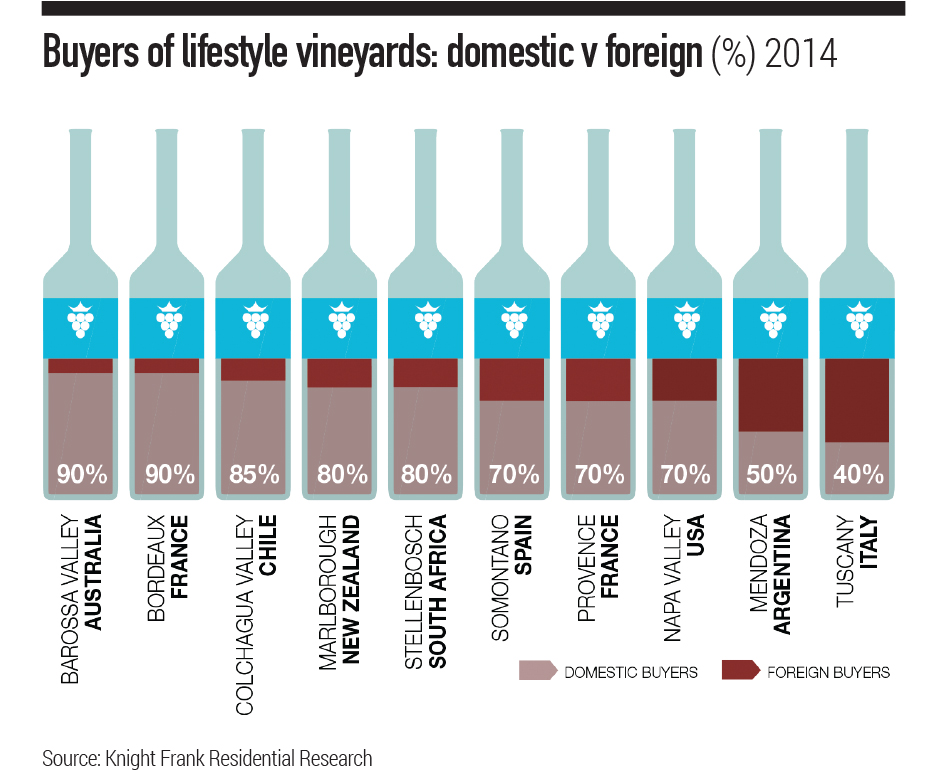 Land values have been rising fastest in Sonoma County, California, according to Knight Frank’s most recent Global Vineyard Index (year to June 2014, see graphic). Hawkes Bay (New Zealand) came next, followed by Barossa (Australia), Marlborough (New Zealand), Chianti and Napa Valley (California). California has attracted a number of celebrity investors such as David and Victoria Beckham, and Drew Barrymore. Asian buyers are taking an interest in Australia and New Zealand. 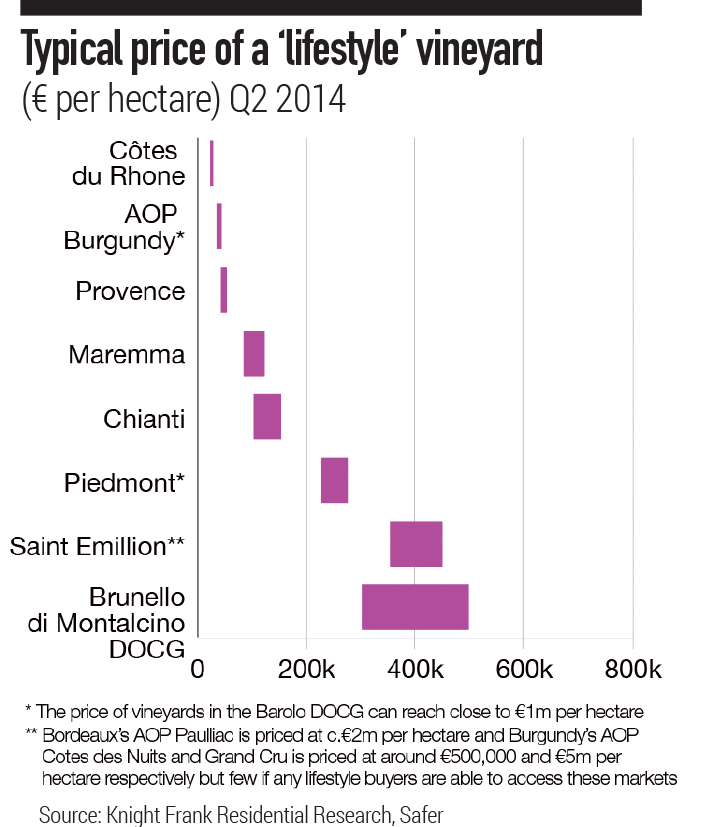 While prices fell in South Africa’s Western Cape, thanks to an oversupply of grapes, this is becoming a more desirable destination, combining beautiful landscapes with rising wine quality. “South African wines are now getting the recognition they deserve globally,” observes Tara Whiting of South African estate agents Acquire Africa. “The rand is very weak and now is a great time to invest.”

Indian healthcare tycoon Analjit Singh recently acquired three adjacent Cape wine farms, as part of a $35 million winery and hotel project. He is building a manor house to use as a retreat from the hot Delhi summers, and is employing a husband and wife team to oversee the winemaking.

A passion for wine can embrace varying degrees of hands-on involvement when it comes to making it. International best-selling author William Boyd (pictured below) sets the standard in hands-off, though his name helps to market the product. Boyd acquired an old farm house in Bergerac, east of Bordeaux, with a vineyard attached. A tenant farmer who leased some of his fields proposed that his son, a vigneron, could replant the vineyard and start making good wine. Four years later, the first red was made and promptly won silver in a local competition. 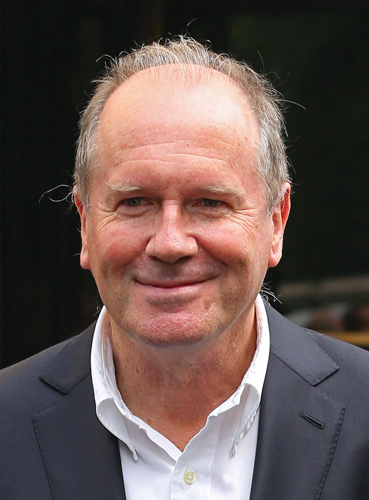 Today, Boyd’s Château Pecachard, a blend of cabernet sauvignon, merlot and malbec, continues to be made profitably by local talent, but Boyd doesn’t earn a penny from it. “If I did, I would have to create a civil farming company [société civile d’exploitation agricole or SCEA],” he explains, “and that would be to invite the full weight of French bureaucracy and customs into your life. Instead, I’m paid in kind with a number of cases each year.”

Unlike Nutter’s wine, which struggles to find a domestic market, Château Pecachard sells well in France on the back of his reputation. Boyd’s books are popular there, and the labels declare that it is his wine. The export market is harder. “French provincial wines are too pricey to sell abroad,” Boyd says. “In France they can sell for €8-€10, which is fine, but by the time they get to a London restaurant it’s £20 ($30.65) , too much for a Bergerac sec.” A UK hotel chain was interested in buying it as their house wine, but the vineyard didn’t produce enough to supply them all year round.

Whatever entry level you may choose, be sure to get an expert opinion on the land, says Jane Berry of Leggett Prestige Property. “Since vineyards often come with a beautiful château property, buyers are often not looking at the right details,” she says. “It’s important to have a consultant to check the terroir.”

Bill Thompson, chairman of Knight Frank’s Italian network, has his own tips. “Don’t go for a secondary location,” he advises, “Don’t buy a vineyard that’s too big – you have got to sell the stuff. And don’t buy one that’s too small (under 5ha). Beyond that, have fun.”

Edward Russell-Walling is a freelance writer for CampdenFB