Families in Asia-Pacific are leading the world at their pace of establishing and evolving family offices as their wealth rockets, the need for succession plans becomes acute and investment returns outperform North American and European family office peers. Families in Asia-Pacific are leading the world at their pace of establishing and evolving family offices as their wealth rockets, the need for succession plans becomes acute and investment returns outperform North American and European family office peers.

Asia-Pacific is becoming increasingly attractive for investments among family offices already in the region and around the globe, favouring high-yield equities. Asia-Pacific family offices have made the sophistication of their vehicles as much of a priority as developing a post-pandemic growth strategy, sustainable investing and succession planning.

However, less than half of succession plans in place were written down. Many Asia-Pacific families said they felt uncomfortable discussing the sensitive topic of succession. Notable numbers said the patriarch or matriarch were unwilling to transfer control as the next generation was ready.

The region’s families were also well behind North American and European counterparts in investing in cryptocurrency.

The report said rising asset prices, unprecedented stock market gains, the technology boom, record deal-making and valuations in private markets were among the factors which boosted the fortunes of 75% of families in Asia-Pacific. Almost one-third, at 29%, described their increase as “significant”, over the past 12 months. Assets under management for the region’s families almost increased as much, at 72%, with 26% going up significantly.

Returns on investments among Asia-Pacific families averaged 15%, a match for North American rivals and ahead of both European families, at 12%, and the global average, at 13%.

To keep up with their rising wealth, a remarkable 40% of family offices in Asia-Pacific have been established since 2010. Families told Campden Research their key areas of growth over the last year related to information technology infrastructure, at 57%, followed by governance structures, at 48%, and more staff, at 27%.

The chief executive of a family office in Singapore told Campden Research the family offices in Asia-Pacific were not like the more mature European offices, “where you have a team of people sitting on a few hundred million dollars and they’re just managing money.

“We do very little of that sort of public markets, bonds and equities investments. We do a lot of direct investing. The family is very industrious in nature, so we build businesses.” 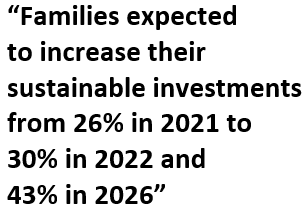 Four-in-five family offices believed the world will be in a state of economic recovery in 2022 and 59% were seeking new investment opportunities. Half at 50% were realigning their existing portfolios for more growth-orientated investments, while 41% were diversifying their portfolios.

An investment adviser for a single family office in Hong Kong said its portfolio was 100% sustainable.

“This is driven by our principal, a second-generation wealth-holder who inherited her portion of wealth about 10 years ago, directly after the financial crisis of 2008,” the adviser said.

“The crisis really hit her, and she started to think, ‘What is the purpose of my capital?’ She was initially more active in philanthropy and social enterprise partnerships, but then over time she realised that she wanted to align 100% of her assets with her values and impact goals. That is why she established the family office.”

Asia-Pacific families were also ahead of the game in succession planning. A resounding 70% said they had a succession plan in place, compared to 52% in Europe and 50% in North America. Yet 40% were formally written and 24% were in development. Almost one-quarter (23%) of respondents said their next generation was not prepared to take control and the principal was not willing to transfer power.

“We had a period when succession was something we did not want to talk about, but we’re past that now,” a family member of a single family office in Hong Kong said.

“We’ve definitely had a talk, but we haven’t finalised anything. We have an informal skeleton of our succession plan, but we’re waiting to fill in some of the missing pieces. My dad wanted to hire a consultant, but we had to postpone it because of the lockdown, so that’s something we will take care of when things open up and restrictions are lifted.”

Campden Wealth launches today the seventh edition of its flagship Global Family Office Report for 2021, the seventh agenda-setting and benchmarking report since its debut in 2014. However, for the first time, Campden Wealth has introduced three regional reports covering Asia, with Raffles Family Office; Europe, with Deloitte Private, and North America with the Royal Bank of Canada, to provide richer and more granular analysis.

The reports were based on statistical analysis of a record number of 385 surveys with family offices worldwide, with 20% from Asia-Pacific, 28% in Europe and 46% from North America.

Click below to find out more about the reports and stay with CampdenFB as we explore the findings.