In their early 20s young couple Simon Jablon (left) and Tracy Sedino had the extraordinary good luck of stumbling across a hoard of vintage glasses – a mixture of Linda Farrow, Jablon’s mother’s former label, and other designer stock. Trainee fashion designer Sedino ditched her plans for further study so she and Jablon could bring the Linda Farrow brand back to life.

Our first account was with Harvey Nichols and that was 10 years ago now. When we went to the appointment we said we had some vintage glasses by Linda Farrow but the girls there didn’t really know the brand. But then we also had Emilio Pucci vintage as well, and they were like “come in”, because Pucci had just been bought by LVMH so there was a big buzz about that, and there was a buzz about vintage so the timing was perfect.

When we went to the appointment we showed them the Pucci and they placed an order and then we said “can we show you the Linda Farrow?” and they said “yeah, why not?”. They didn’t really know anything about it, but they thought it was amazing and they brought in all the other girls from the office and they were all trying them on. Then the head buyer came by – she was actually the assistant buyer back in the 1970s, she dealt with my parents and she’s the senior buyer there now, so she said basically, “buy the collection, take it on board,” and it all started from there.

Tracy and I are both heavily involved in design and this is the key to the business, we are still the designers of the collections. I come from a more practical, technical perspective and Tracy (left) is definitely more the fashion and the stylistic side. We have other people in-house who are our production team and they take care of the design process, but Tracy and myself are the creative directors and we oversee everything.

I think the business has been so successful in such a short space of time because we found a new space in the market. We didn’t think like a business when we started this – we did something because we thought it was good, we thought it was fun, and it was interesting. It was pure and people appreciated that. I think too many businesses are built off the back of a business plan of some accountant who goes “that other business over there is doing good, let’s take a piece of their business, let’s saturate their business because there is enough to go round”. But to really grow I think there has got to be something fresh and new and exciting. When we were 24 and 22 we had the ability to do whatever we wanted, there was no risk involved, we had some vintage stock and it was our time. 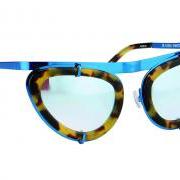 When it comes to selling up we never say never, it all depends on who it is and what they want. At the moment we control everything in-house and we’re still a hundred percent shareholders of the business. We’re still niche and we’re luxury and I think the value of luxury is not just how expensive a product is, it’s the tender loving care that goes into it and that only comes from when there isn’t a big corporate structure, when it’s individuals that actually care about what they are doing. That is what we want to keep in place and that’s how it stands for now.

Having entrepreneurial parents has influenced me massively. Since the age of eight I knew what I wanted to do and it was clear as crystal to me. It was either one of two things, it was to be a sportsperson or an entrepreneur and that was it. There was never another option for me. And so I guess all my life I’ve known what I am going to be doing and where I want to be going. Even today I am constantly coming up with business ideas and things like that – it’s part of what we do when we sit round the table at dinner. We used to talk about work, about opportunities. It’s just one of those things, I’m constantly thinking about it.

The advice I would give any entrepreneur – I’d probably heard it, but you don’t always take it seriously – but the one thing you should always do is your accounts. Even though they are really boring. Because you are either creative or you are not, you can either create great products or you can’t, but make sure you are keeping track of your numbers because there are too many people who can waste all your profit and can kill a company because they aren’t doing something right – people aren’t collecting on the debt properly or something, and it is those things that can sink a company, not always the basic idea. So from day one, the first penny, in the first penny out, you’ve got to control it very tightly.