Ownership of a private jet endorses super-rich status, but running costs might tip even the most cost-conscious owner into the ranks of the poor if they’re not careful. Ownership of a private jet endorses super-rich status, but running costs might tip even the most cost-conscious owner into the ranks of the poor if they’re not careful.

Are you considering buying a private jet? If so, how much would you be willing to pay? $4 million (€2.9 million)? $40 million? $400 million? That’s the choice you face to enter the exclusive club. But that’s just the upfront cost, often only 30% of an aircraft’s total lifetime costs. What about the charges to maintain and run it over the course of its likely 15-year useful life? Not to put too fine a point on it, sheer mathematics dictate that being a billionaire in your own right is often a necessary prerequisite.

When Prince Alwaleed bin Talal, the 57-year-old Saudi believed to be the world’s richest Arab with a net worth of $18 billion in 2012 according to Forbes, wanted to add some gloss to his stature, a solution was not hard to find: at the 2007 Dubai Air Show, Airbus announced he had ordered the first, and to date only, A380 Airbus Corporate Jet. In future decades, the aircraft, in its private-jet form, is unlikely to come into the hands of more owners than the fingers Bin Talal has on his right hand, and then probably only in the fabulous sheikhdoms of the Gulf. News reports say that, six years on, delivery of the prince’s super-jet – leaving him little if any change from $400 million – is imminent.

Today you are still more likely to encounter riches beyond your dreams in North America. US high net worth individuals dominate the global billionaires’ league at over one-third of the total, with Europe next at around one-sixth. There is a marked correlation between wealth and aircraft deliveries: over the next decade, North America is forecast to deliver more than 40% of total orders, while Latin America will punch above its weight to take more than 10% of global sales.

Phil Nasskau, spokesman for Bombardier Business Aircraft, which makes Learjets, Challengers and Globals (the Global 600's interior pictured, right), agrees. China and India’s markets for private jets are expected to grow fastest in the next two decades, at 13% compounded annual growth rate, he says. China’s business-jet sector is forecast to increase more than 10-fold in size from 210 jets in 2011 to 2,590 in 2031, while India’s is predicted to grow from 115 to 1,420 jets over the same period. “That’s massive growth, both in fleet numbers and percentage points,” says Nasskau. “The Latin American fleet is roughly going to double over the next 20 years from 1,650 to 3,135 units in 2031,” he adds. However, it is worth highlighting, he says, that “when we at Bombardier talk about fleet and fleet growth we are only quoting numbers for the segments that we compete in”.

Nasskau declined to give a breakdown of Bombardier sales to either private individuals or operating companies, saying only that the firm had delivered 179 business aircraft in 2012.

Regulators keep a beady eye on the management and operation of private jets all around the world. The licence required by operators of business jets, conferring the right to ferry third-party passengers, is the Aircraft Operating Certificate, or AOC.

While private jets can operate outside an AOC, industry groups like the Middle East Business Aviation Association urge owners to put them under an AOC to prevent misuse, a form of infraction often referred to as the “gray market”. This can involve ferrying passengers without proper insurance, thus reducing costs, but leaving the parties vulnerable in the event of an aircraft incident. Because private jets often operate for as little as 600 hours a year, the temptation for private owners to put them to extra use is often hard to resist.

Today, the US accounts for a staggering two-thirds of the global registered private-jet fleet. Second is Mexico, with less than 4%, while Brazil’s fleet is of a similar size. Canada is fourth and Germany fifth. In homage to offshore havens, plucky little Isle of Man comes in sixth, with 254 aircraft. Although China is growing fast, it still accounts for only 1% of global private jets registered. “[Some] 66% of the over recorded in the [Ascend Online Fleets] database are registered in the US,” says Rob Morris, senior aviation analyst at Ascend Advisory.

The world’s leading ‘original equipment manufacturers’, as they like to be known, have been quick to exploit the market for executive jets in the past two decades. Airbus says its corporate jet fleet totals 110 “narrow bodies”, and a further 60 wide-body equivalents. Boeing Business Jets are also popular with ultra-high net worth individuals, with 161 in service today. Canada’s Bombardier has evolved from its roots as a car and train-maker to manufacture and acquire some of the leading names in the global industry. Brazilian company Embraer has also been very successful.

Since scheduled commercial airlines are seen as the main beneficiaries of Boeing and Airbus’s products, analysts tend to follow the smaller, more niche business-jet manufacturers, like Hawker Beechcraft and Dassault. Of these, Bombardier and Cessna (Cessna's Citation Mustang pictured, left) stood out on unit deliveries for 2011/2012, while Gulfstream and Embraer were also sizeable players. But with Cessna supplying jets to the light market, and Bombardier and Gulfstream the heavier side, unit volume is not the whole story.

Information on ‘pre-owned’ jets provided by Argus International, a US-based data provider, shows that business jets within the reach of the less well-heeled are still expensive. A Learjet 60XR (pictured, below right) will cost you $7 million. The larger Dassault Falcon 2000LX will set you back around $21.8 million. Running one of these monsters is a headache: the annual salary alone for a captain flying aircraft like the Bombardier Global Express XRS is around $152,500.

Middle East operators have often enjoyed success built around the needs of Gulf royalty, who often appear as board members of the many companies operating in the region. Companies like Abu Dhabi’s Royal Jet, 50%-owned by the UAE’s Presidential Flight Authority, or Saudia Private Aviation, the executive-jet arm of Saudi Arabian Airlines, operate small fleets of around 10 aircraft, catering to government or executive delegations.

Dr Mark Pierotti, chief operating officer of aircraft charter and management company Al Jaber Aviation of Abu Dhabi, says: “The downturn has had an effect on our business for sure. Those that flew first class are flying business class, those that flew business class are flying economy, and those that flew private jets are looking for less expensive ways to travel. This has also affected the buying and selling of executive jets. One other effect is the owners are making available their private jets for commercial charters (as opposed to those that have sold them due to the expense), trying to help offset the cost of ownership with charter revenues.”

AJ Baker, vice-president of commercial business at Falcon Aviation Services – an Abu Dhabi-based company that owns and manages five business jets and 26 helicopters [as of March 2012], says fuel contributes to a variation in running costs around the world. “[Argus International] prices fuel at around $6.20 a gallon [for an Embraer Lineage 1000]. We certainly do see broad price fluctuation when flying internationally, but as much of our fuel is sourced and used within the Gulf Cooperation Council, our costs are more like $4.25 a gallon, almost a third cheaper, for much of our regional operations. On the flip side, our labour costs and parts expenses are higher, as are miscellaneous trip expenses. Regionality does play an enormous part on fixed salary costs,” Dr Pierotti says. 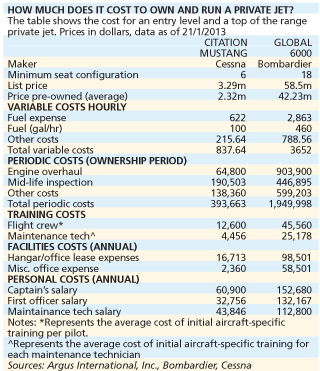 Baker says costs in the Middle East are higher than other parts of the world. “Out here [in the Gulf], the package needs to include not just salary, but accommodation for the employee (and their family if on a family package), travel and transport, visas, medical insurance and a host of other things. In most cases, you can safely add 50% plus to the numbers shown. A senior captain on a family package costs us well over $200,000 [a year].” Baker adds that missing from fixed costs are finance and depreciation, the true ‘makers or breakers’ of whether an aircraft can be profitable or not. “If your $47 million aircraft is financed at 80%, you can quickly add a very hefty portion of fixed cost to the equation!”

Inevitably in the downturn, new and pre-owned sales have taken a pasting. “The global business-jet market has been at a low point for the last several years,” says Shirley Mason, senior vice-president at Argus International, who sees a possible shift in sales of business jets in the US. The year 2012 saw a levelling off of the number of business jets available for sale in the US and a small increase in Europe. The plateau may be attributable to Europe’s growing inventory of aircraft for sale built in 2000 or later, she says.

A year ago, Europe had twice as many aircraft available as North America. Since then, the North American inventory has held steady while Europe’s has increased from just below 15% to nearly 17% over the last year, making for a very soft market. With nearly 10% fewer choices in the US, supply there is relatively tight, she says. Mason adds that another shift in the marketplace to watch for in 2013 is a floor to, and possible reversal of, the drop in prices for used business jets.

“Market analysts are predicting that the downward direction in pricing in recent years has hit bottom for many of the aircraft types available,” she says. Many of these jets go into time-share fleets, such as the US’s NetJets, where they are leased for limited periods on a round-robin basis. Fractional ownership in the US is still in the doldrums, Mason says. “Fractional aircraft activity as compared to the on-demand charter segment is currently experiencing a downturn.”

As economies emerge from the downturn, OEMs will look to get back on the front foot to deliver growth to the bizjet market. The response from owners and operators is likely to be hesitant for some time. Now that you know the costs involved, are you still determined to take the plunge?

[Since publication it has been reported that Prince Alwaleed bin Talal has sold his private jet.]