Superyachts are getting bigger and bigger, seemingly oblivious to economic woes. What is it that makes them such a desired object? If you travelled to the shipyard of the fourth-generation shipbuilder Lürssen in the German town of Bremen-Vegesack at the moment, you would be greeted by a spectacular sight. Floating in one of the docks there is a ship so big that it resembles an aerodynamic block of flats. It looks more like a particularly sleek spaceship than something you might expect to see floating in the water.

This is the mysteriously named Project Azzam, which at around 180 metres is the world’s biggest superyacht. That makes it considerably bigger than the current largest, Russian billionaire Roman Abramovich’s Eclipse, which comes in at a paltry 162.5 metres. Nobody even knows for sure who commissioned Project Azzam, although rumours suggest it’s Saudi billionaire Prince Alwaleed bin Talal (pictured with his wife Princess Ameera, right), owner of the Savoy hotel in London and a good chunk of Citibank. Secrecy shrouds the new boat, but Eclipse has two helipads and a mini submarine – and it would surprise nobody if the new mega-yacht was even more extravagant. 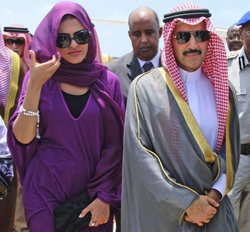 You might expect that creations like Project Azzam had gone out of fashion after 2008, but demand for superyachts is high. There were 182 launches last year – up from the 178 launched in 2011, but still well below the industry high of 275 in 2008, according to research company Superyacht Intelligence. There are now 4,686 superyachts – that is, yachts of 30 metres or more – and half of them were launched in the last 10 years. They don’t come cheap.

A brand new 30-metre yacht would set a buyer back about €15 million, while a 40 to 50-metre one would be around €35 million. “It is probably the single most expensive asset you are going to buy, much more than a house in most cases. I don’t think there is a piece of jewellery or a piece of artwork that could quite match the cost of a very large yacht,” says Rupert Nelson, sales director of yacht brokers Burgess Yachts.

The cost doesn’t end there. Expenses such as crew salaries, insurance and berthing fees quickly mount up, not to mention fuel (Project Azzam is said to have a tank that can hold a million litres of fuel, and requires 50 fulltime staff to keep it ticking over).

Prospective superyacht owners can temper the cost by buying a second-hand vessel, or putting the boat on charter when not in use. But an owner’s pockets have to be pretty deep to enjoy the yachting game. Simon Goldsworthy, a senior yacht broker at Camper & Nicholsons, estimates a 30-metre yacht would cost about €400,000 a year to run: “You would need to have €20 to €30 million in liquid assets to be able to run a yacht this size comfortably, without it becoming a very stressful part of your life,” he adds (the Maltese Falcon, one of the world's largest sailing yachts pictured, left).

Superyachts are a depreciating asset, too. Goldsworthy says: “Any wise person going into yachting should go into it as if they were buying a car – in other words, you know when you drive it off the forecourt that you’re going to lose some value.” He adds: “People generally don’t buy boats that are more than 15% or maximum 20% of their wealth because you just don’t want to tie up that amount of your money in something that you know will depreciate and isn’t really making you money.” There is an old adage among sailors that yachts are “a hole in the ocean that you pour money into”. Superyachts, then, make superholes. 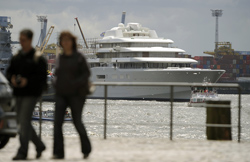 So why do people get into superyachts? Prestige, of course, is one reason. “There is an element of competition, I think, within the very high echelons of billionaires, oligarchs and Middle East princes that want to have the biggest and the best and they’re not too conscious about the cost,” Nelson says (Eclipse, currently the world's largest superyacht, owned by Roman Abramovich pictured, right). Indeed, the modern superyacht emerged from a battle for kudos between Aristotle Onassis and Stavros Niarchos when their shipping empires went head to head in the 1960s and 1970s. This spilled over into a competition to have the most spectacular yacht.

“It became quite heated, I gather,” Nelson says. “It was the ultimate thing to have at the time – very one-upmanship, and it very much set the scene for today’s high-end yachting; the pool on deck, luxury bars and beautiful tenders. To a certain degree the advances in telecommunications technology allowed such early pioneers as these two giants to spend time away from their offices on board their yachts.”

But there is more to superyachts than a refined version of chest beating. Goldsworthy thinks it is comfort rather than bragging rights that tends to increase the size of a yacht. “[Owners] might like to have a spa for example, and then you have to have a certain size of yacht to fit a spa in, or to have an actual swimming pool rather than just a small Jacuzzi (the pool of Baton Rouge pictured, left). It’s an evolution through various design meetings where [the owner] would say, ‘Well, I’d really like to have a large study and I also want to have a cinema, and I want them all to be on this deck’. And the designers would then say, ‘Sorry boss but four into two doesn’t go, the only way to do this would be to lengthen the yacht’.”

According to Nelson, the ocean gives owners the freedom to build a fantasy asset that doesn’t exist anymore in prime real estate markets. “You couldn’t build Buckingham Palace again in London privately because you couldn’t get the land. But you can build a yacht that is 160 or 170 metres because the technology is there.” (That said, the average superyacht is way smaller than this, coming in at around the 40-metre mark.)

“The good thing about owning a yacht is that you create your own environment,” says Hein Velema, chief executive of brokers Fraser Yachts. “There is a lot of luxury in terms of service but there is also a lot of safety. You can go to all kinds of places in the world but you still have your own environment around you.”(Baton Rouge stern deck pictured, right.)

Kevin Merrigan, president of brokers Northrop & Johnson, adds: “[A yacht] is the most custom and luxurious vacation you can ever take.” And superyachts are a love affair for their owners – during the build they have the pleasure of watching the project develop from a wish list of special features and first sketches right up to its launch. This is a slow-burning pleasure – it takes up to four years for a fully customised yacht to be delivered.

It can be a difficult and stressful process. Brokers are always looking for first-time buyers, but a €15 million yacht and a four-year time commitment might be very daunting for the uninitiated, regardless of their wealth. And things can get out of control. “Their running costs escape them and this can ultimately lead to frustrations and difficulties, and sometimes to a negative experience of yachting,” says Nelson.

However, there are alternatives. “The gateway drug for yachting is chartering,” says Goldsworthy. Charter rates can start as low as $45,000 (€33,700) per week for up to 10 guests. This includes full use of the yacht and its toys and tenders and crew members, including a captain, chef and stewardess, to tend to your every need. If you do take the plunge, Goldsworthy advises first-time owners not to try and build “the dream” first time. “I would say start off with a brokerage yacht that isn’t as much of a time investment. Buy something that’s like having a vanilla ice cream – that you like well enough and then after a year or two you’ll start understanding how you want to change it, and what you would do differently if you were to construct that boat again.” (Superyacht Slipstream pictured, left).

There’s no shortage of people willing to sell you a truly unique vessel. In 2011 UK-based designer Yacht Island Design launched the Streets of Monaco concept – modelled on a section of Monte Carlo (pictured, right). It featured facades of famous buildings in the city, a go-kart course imitating the Monaco racetrack and a waterfall. The same company came up with Island Paradise in 2012 – an island-themed yacht featuring a volcano. These designs are extreme, but many design houses have a concept in their portfolio that would raise eyebrows.

However, it is very unlikely that you will see many concept yachts like these squeezing into ports among the rows of pristine white hulls. Velema says: “I think there is a lot of wishful thinking from designers. They think, ‘this is a billionaire, he can do whatever he wants’. But [superyacht owners] are not stupid, otherwise they would not be so wealthy.”

Yacht Island Design does have more conventional designs to pitch (its 90 metre concept pictured, left) and its director Rob McPherson says: “The current standard white mono-hull design of yacht will likely be with us for years and will continue to be popular. We do, however, see a small number of very unique vessels being built and some of our designs are geared towards showing just how creative we can be.”

For most this is about the interior, which can almost match a mansion for comfort and technology. Swimming pools, hot tubs, cinemas, spas and helicopter pads are now standard on any new launch above 60 metres and are often squeezed onto the smaller yachts as well. A yacht’s garage is filled with gadgets like jet skis, speedboats and submarines. “All the IT, AV and communications will be at the very highest cutting edge, the likes of which one might expect to find on Air Force One – perhaps without all the need for encryption and secrecy,” says Nelson.

All this technology means that these days there are other ways to stand out than sheer size. Lighting, for example. “You’re looking at it in the bay in Cannes and she’s not lit up white like all the other yachts,” says Nelson. “She can be purple or green, or turquoise or yellow or red. Fibre optic mood lighting is phenomenally expensive. It’s not unusual for a client to request the very best on-board lighting system money can buy, and in one case this cost about €4 million, and that was just for exterior lighting – in other words, to have a different coloured yacht at night.”

Being able to point to a bright pink boat in the harbour at Saint-Tropez must give you a little thrill. Is it one worth millions of euros? If the answer’s yes, you’d better get saving.