The 153-year-old family business said growth was driven by a 13% increase in revenue in Asia where larger sales have grown at a double-digit rate for two years.

Heineken gambled on the Asian market in 2012 when it purchased Asia Pacific Breweries, the producer of Tiger Beer, which has grown at a double-digit pace since 2015.

The fourth generation of the Heineken family hold a 45.8% share in the business. 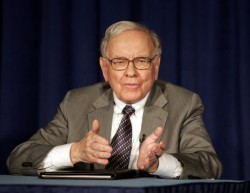 US holding company Berkshire Hathaway, headed by chairman Warren Buffett, has dumped 90% of its Walmart holdings last quarter, totalling some $900 million, according to the Wall Street Journal.

Buffet has reduced his holding in Walmart from $3 billion in 2016 to now less than $100 million—the 86-year-old believes Walmart will struggle to compete with Amazon, despite pouring billions into its e-commerce efforts.

Berkshire Hathaway traces its roots to a textile manufacturing company established by Oliver Chace in 1839. Today it is the fourth largest public company in the world, and the largest conglomerate in the world.

Buffett’s son, Howard, sits on the corporate boards of Berkshire Hathaway, which in 2015 had revenues of $210 billion.

The Düsseldorf-headquartered corporation attributed its success to growth in its adhesives technology, beauty care and laundry businesses.