The superyacht regatta scene has turned the top-end of yachting on its head. As both fleet and average boat length have grown in line with ever expanding wealth, so too has the appetite for competitive, racecourse performance. Mike Owen profiles the world’s top five superyacht regattas

The superyacht regatta scene has turned the top-end of yachting on its head. As both fleet and average boat length have grown in line with ever expanding wealth, so too has the appetite for competitive, racecourse performance. Mike Owen profiles the world’s top five superyacht regattas.

Billed as the Mediterranean opener, it’s sailed in early June, and draws around 10 to mid-teen entries, boosted this year to 25 with the regatta included in the modernist Wally Class racing circuit.

The racing here is in waters a vibrant cobalt blue in defiance of the region’s smeralda (emerald) nomenclature, and in variable breeze. Some years the winds are light, but often blustery, and are always testing fleet nerves as they weave between laid marks and hard rock island turns among the glorious and tactically challenging Maddalena Archipelago. With these rock sides fast dropping into the deeps, the braver sailors pinch in close where they can, making for shorter roundings and startling photography from the snappers’ chase boats and low-flying helicopters.

Created by Pier Luigi Loro Piana, a keen yachtsman and regatta participant when not at the helm of the event’s sponsoring, eponymous, high-end clothing company, the regatta is now in its eighth year and has spawned a sibling event in the Caribbean.

Raced in the bay of Palma against the backdrop of this ancient city’s iconic, grand pinnacle-spired cathedral, the Superyacht Cup is the original and still biggest of all Mediterranean superyacht regattas. This year is celebration time, too, it’s 20 years now since the fleet first gathered. In that time the line-up has stretched in size and number, but the party spirit remains true.

On Mallorca’s south western fringe, Palma has long held special attraction as a natural point of departure and arrival in yachting’s annual migration between Mediterranean and Caribbean seasons. And that’s how this all started, as an autumn event for the transitioning fleet. Now staged in June, it attracts wonderfully diverse entries, and while the racing crews work the course, those ashore explore the island. There’s so much to hand. Historical, cultural, architectural, and shopping delights in the old capital, while away in the countryside fine fincas and spas, and a race car circuit you can drive yourself – by the hour. For views and hairpin thrills, tour the Tramuntana hills, then the restaurants of quaint Deia.

The focus, though, is afloat, and for all but one, on the boat ahead. Then it’s back into harbour and nights of fine dining and celebration. 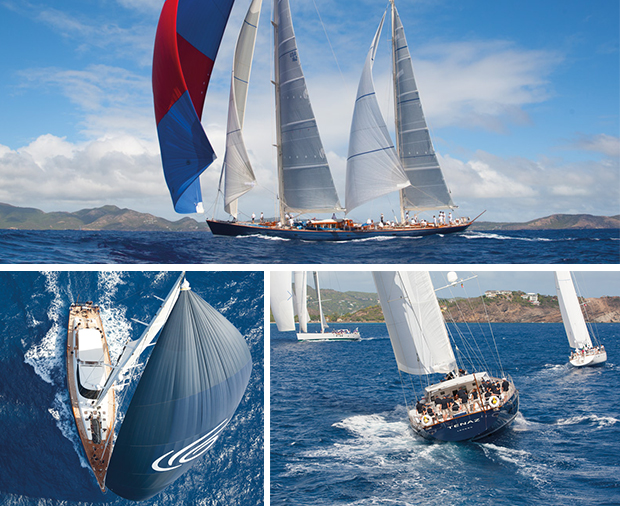 The first event on the regatta calendar, in late January/early February, the Superyacht Challenge Antigua is by comparison a small, very informal affair, more in the vein of the first antecedents. Simpler, barer, as by choice it has no major commercial underwriting. The result is a Corinthian-style event, if that term can actually be applied given the exotic, expensive nature of the 12 to 15 boat fleet gracing Nelson’s Dockyard.

With the island’s long history of staging internationally attended sailing regattas, most famously Antigua Race Week, the heritage runs deep and the attraction to the superyacht fleet is straight forward. This is a great place to sail with good winds, big seas, and testing windward leeward courses for tacticians and crew. And the parties ashore run late into the night. Flying your crew in is simple, too, with direct flights. But that also makes the island more mainstream than the more isolated venues of the other Caribbean regattas.

Extending the franchise between club and far-sailing membership, the illustrious Yacht Club Costa Smeralda took the extraordinary step a few years back of creating a Caribbean annexe, a home from home, in the British Virgin Islands.

It’s an enchanting locale, a hillside nest sloping down into the waters of Virgin Gorda, with the most spectacular views and, below the contemporary terraced clubhouse, neat docking for superyachts. The clothier Loro Piana felt the quality and quickly doubled its regatta offering. True, the fleet is still small, but the venue and racing are undeniably good.

Leaving the sound, the courses are laid in between and around the peaked, scattered islands. The names set the scene: Sir Francis Drake Channel, the Dogs, Prickly Pear, Ginger Island and, of course, Richard Branson’s Necker Island with its picture postcard, palm tree-topped sand reef.

This early March event entices not just racers. The clue’s in the name with some coming only for the social side. While the tradewinds blow their predictable breeze, the explorer walks the trails; discovers The Baths where Jurassic Park meets Caribbean Beach; tenders across to Anegada for lobster lunch, or to Eustatia to snorkel with the turtles and rays. 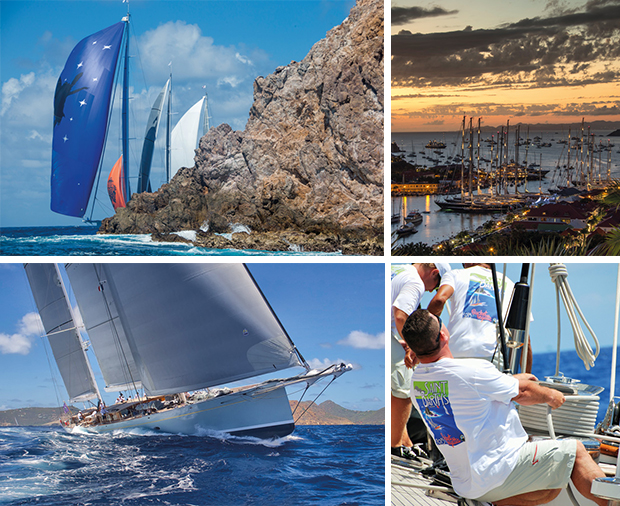 Astandout event in perhaps the most chic of all Caribbean settings, the St Barths Bucket is the largest and longest running of all superyacht regattas. Sailed annually in late March and regularly attracting a fleet of around 40 of the world’s finest yachts, this year marked the event’s 30th anniversary.

What began as a simple sailing celebration among friends now dominates this tiny, eight-square-mile island’s main harbour, Gustavia. First, of course, there’s the grand spectacle of these elegant yachts, their tall rigs and night lights illuminating not just the aerial view but even the sea and patrolling sealife beneath. But think of the entourage, a thousand and more friends, family and crew filling bars, restaurants, and just walking the dock. The onlooker, knowingly or not, is witnessing the true Who’s Who in the worlds of business and pro sailing.

Despite the seriousness in competition, the famed line here in St Barths is win the party. Like all, it’s a highly social regatta but with the bohemian, colonial tone overlying this French outpost’s poise and charm, the mood is more informal, relaxed, and light hearted.

The three day’s racing also happens to be in some of the most fascinating waters in the Caribbean.