The eighth generation brothers who run Aspall Cyder see their product as a rival to champagne. CampdenFB speaks to them about the black art of cider-making and taking advice from maharajahs.

There was a lovely moment just after I’d sat down with the Chevallier Guild brothers when Barry was having a little trouble with a coffee pot. Henry walked over to help out and, as they both grappled with the plunger, it was a rather sweet scene of fraternal cooperation: “It’s got a bit…”, “Just press the…” “How do you…?” After some delicate coaxing, the blockage was removed, the handle depressed and the coffee was served. Some siblings in family businesses have fractious, antagonistic relationships, but it’s blindingly obvious that these two are totally and utterly at home in each others’ company. You can hardly imagine them not working together. 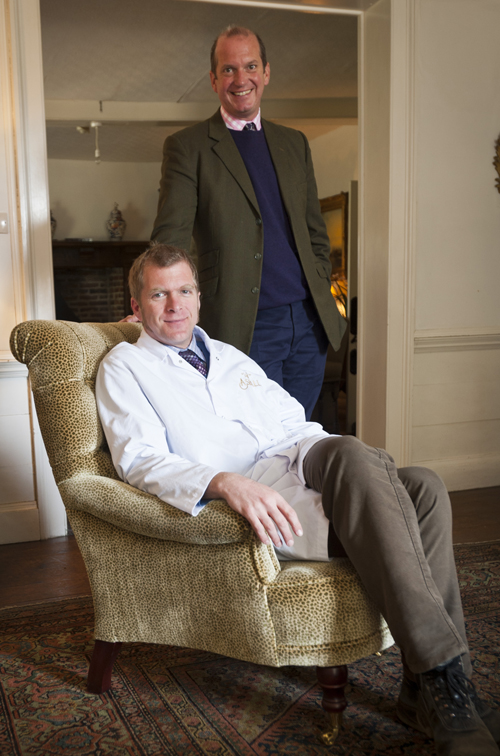 At first glance they might seem like a slightly odd couple. With his long sideburns, well-worn work boots and white coat, Henry, who is 45, cuts a definitely raffish figure alongside Barry, 47, with his country squire tweeds and slightly more plummy voice. Maybe the surroundings foster harmony. Rather than some sterile boardroom, we met in the absurdly picturesque drawing room of the family’s 15th century home, Aspall Hall in Suffolk, which is packed with antique sideboards and chairs. The Queen Anne frontage makes the house look newer than it is, although the moat that surrounds the house is – they tell me – 2,500 years old.

All around are orchards, planted with 42 varieties of apples with names like Medaille d’Or, Chivers Delight and Greensleeves. Bucolic is the word, for sure, and if you couldn’t see the state-of-the-art bottling plant and array of massive steel containers filled with tens of thousands of litres of apple juice just over the hedge, you could easily be in the 18th century. The two members of the eighth generation of cider-makers, and the business’s sole owners, clearly love it here. Barry lives in the manor house with his wife and two children and Henry only a 10-minute commute on foot away across the orchards.

Since they joined the family business 20 years ago they have revolutionised it, and Aspall has become the best-known artisanal British cider – they call it “super-premium” and refer to it as “cyder” on the packaging – with 2% of the UK market, a figure which, if the industry consolidates as expected, will soon make them the fourth or fifth biggest producer in the country. It’s a mainstay at posh music festivals. Their aims are even higher. Henry says they want to be “the benchmark, the default standard for English cider globally”. “Whenever you go into a five-star hotel anywhere in the world you will find a bottle of French champagne in the bar. There is no reason why there couldn’t be a bottle of Aspall in there as well.” 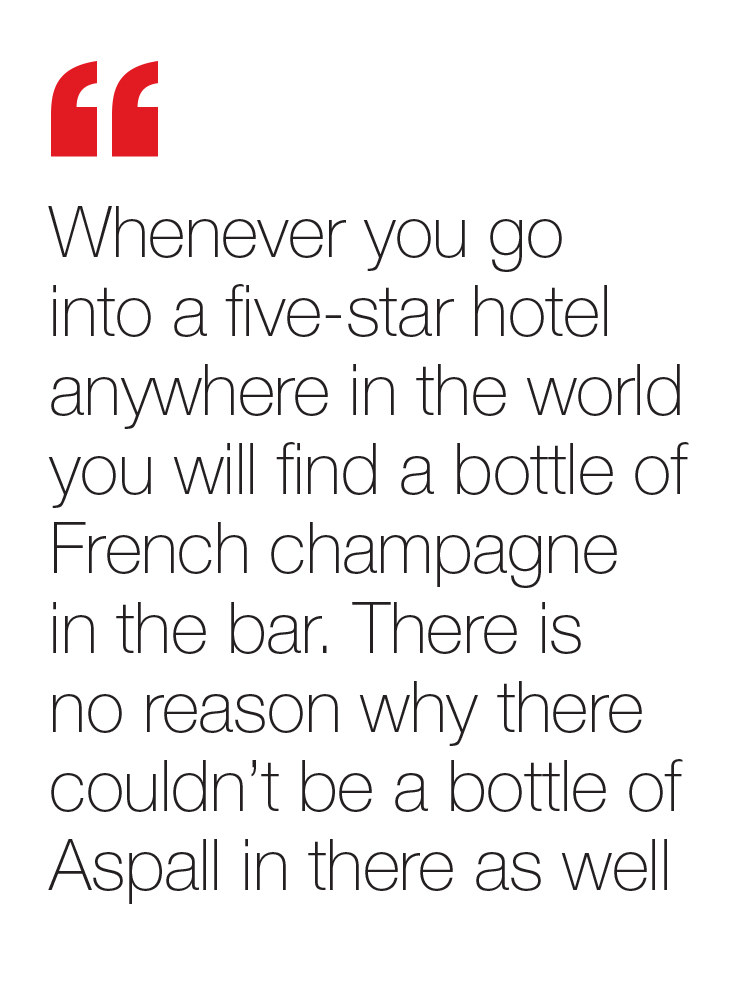 Although they didn’t go straight into the business, it was a “racing certainty” that they would, reckons Henry, who says he was “11 before [he] realised that not everyone does what their dad does”. The route into the business was indirect, though. Henry studied business at Oxford Polytechnic and then worked at the Truman Brewery in London for a year before seeing the world. “A few years later I came wandering back through the door with a beard and long hair,” he laughs. “If you go travelling for any amount of time there’s a huge degree of one-upmanship. I just had this moment in India on a motorbike when I just thought, ‘Whatever I do, there will be someone somewhere doing something more interesting.’ And a light went on and I thought, ‘Time to go home.’”

Barry had always wanted to be in the army (his father joined the navy aged 13) but didn’t get in and studied politics and history at Bristol Polytechnic before working in London as a parliamentary consultant and in a car-dealership, where he “learned about how to placate angry customers”. “I was home one weekend and my parents said, ‘We’re not getting any younger. Have you thought about coming back into the business?’ I had but I hadn’t set a date or a time, and it just seemed the right time to leave London and come back here.”

Henry took over the production side and Barry the managing director role, which he held until he stepped up to chairman last year, and a non-family managing director came in. They were lucky, they say, because their father had built a great business, 85% of which was contracts to make own-label vinegars. “It was a solid business, it was profitable, had no debt, we had good contracts with supermarkets, there was no need to actually change anything at all initially,” Henry says. “That gave us the time to look and think what made Aspall different.” 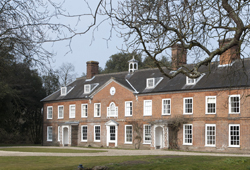 They decided two things. Firstly, that putting other people’s name on most of the bottles they produced was a waste of a great brand. And secondly, that they should develop the cider business. When they took over, Aspall only made about 30 cases of cider a year, half of which was sold from a shop that opens onto the country road that passes the estate. The rest was sold to a couple of local wine merchants. Amazingly it was only during their father’s tenure that they stopped using the original apple press from 1728, a huge wooden contraption with a hand-turned screw on top that still sits in the old cider shed as a museum piece. Now 65% of Aspall’s sales are from cider, and the rest is split between non-alcoholic apple juice and vinegars.

Getting the cider business going wasn’t plain sailing. Someone on the site had worked under Harry Sparrow, an iconic figure in the Aspall heritage who made cider there for 50 years and whose name graces a product launched last year. But, says Henry, there was much talk of “black arts” and not much science. “So I went on a cider-making course and realised that other people used a lot of sugar syrup to keep costs down, which we weren’t willing to do.” Other cider-makers said people simply wouldn’t pay what they were charging, but “I said, if the liquid is good enough, you can,” Henry remembers. And so in 2000, they relaunched the cider. 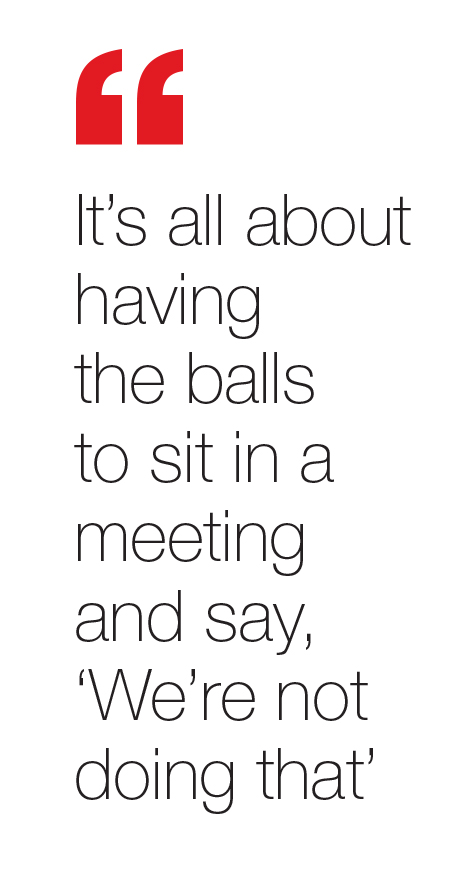 There was resistance from buyers to a premium product, and at one point they caved in and dropped prices but sales didn’t increase, so they decided to stick to their guns. “Quality will always win out,” says Barry. “It’s all about having the balls to sit in a meeting and say, ‘We’re not doing that.’” People couldn’t believe that they were walking away from contracts, but the profitable business their father had created made it possible. “We didn’t make any profit out of the cider for five or six years,” says Barry.

Their parents, who still live nearby, were utterly supportive. “Up until the point we said we wanted to come into the business they showed an almost complete indifference to whether we came back or not. They said, ‘If something else floats your boat, then go and do that,’” says Barry. But once he had passed on the torch, their father bowed out quickly. “We had a board meeting and he didn’t turn up so I called his personal assistant and she said that he’d taken the dry-cleaning into Ipswich,” laughs Henry. “We realised soon after that, ‘Blimey, we are running a business!’”

Although they were hands-on at the start, learning how the business works, their roles have developed since then. It took some time to get used to the idea that, as Barry puts it, “you don’t have to be sitting at a desk all day crunching numbers to be working”, but they now spend lots of time networking and spreading the word. The week before we met, Henry had been in Japan and Australia and the week after he was heading to New York for a month, then Chicago in July. The vinegar recently launched in the American Whole Foods chain, and they see big potential in the US. 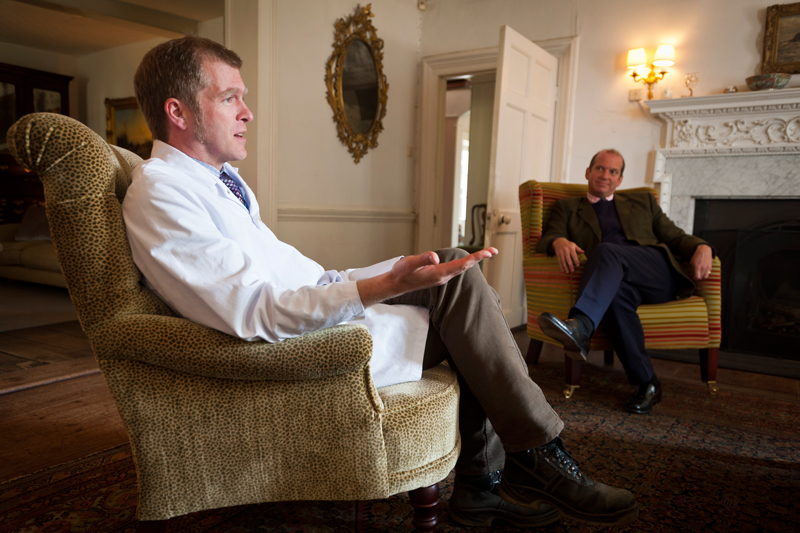 And what of the future? Henry has no children, and Barry’s two – aged 12 and 13 – have showed friends round the farm and, he says, realised from their reactions that it’s something special, but he’s putting no pressure on them. For now the brothers are focused on 2028, the 300th anniversary of cider-making at the farm. The entire business plan is geared to that date, when they aim to be synonymous with British premium cider, and to have revamped the site and built a visitor centre. They are also planting 4,000 apple trees in the orchards and hope that by 2028 a third of the 15-18,000 tonnes of apples that go through their presses every year will be grown on site, or under contract.

All this is motivated by a great responsibility to the business. “We are custodians of something,” Barry says. “Half of my friends in the City say they wish they made something. They all say, ‘When you are going to float, I want shares in your business.’ And I say, ‘Why would I want to do that?’ We have this fantastic legacy, this fantastic heritage.” Henry adds: “I suppose that we all have our price, but I just don’t believe that anyone would give us enough money to get us to part with the lifestyle. And even then, what would you do?” 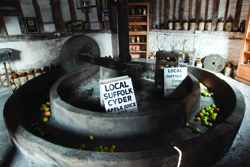 Although they have changed Aspall out of all recognition, the brothers are conservative at heart. “I was at a family business conference and there was this bloke there who [was] the 77th generation of an Indian family business, they’d been maharajahs,” says Barry. “He said that you don’t have to change everything, just let it work. If you have a fantastic idea, then great; but if not, then make sure it’s there to hand on to the next generation for them to do something. The golden rule is: don’t cock it up.” Who wouldn’t drink to that?