Classic cars are proving to be one of the most resilient of all the passion investing options. CampdenFB asks why.

The heart can rule the head with classic cars. Despite the need for a disciplined approach when investing in classic motors, it is emotion rather than cold logic that is the driving force. Those sensual lines, primitive engine growls and aroma of richly mixed fuel are all part of the allure. But it is a nostalgic wind-in-the- hair sense of freedom that often clinches the deal – a love affair only consummated with ownership. The question of whether a classic car can take you from A to B is almost irrelevant. If reliable transport is the priority, then you should stick to a modern box on wheels.

“An emotional attachment is essential for the relationship to work. Vehicles are not to be treated like stocks and shares. Only get involved in buying and collecting classic cars if you have a genuine passion for them,” says James Knight, international managing director for the auction house Bonhams. “Classic car enthusiasts are not like sheep but fortunately there are enough classic motors to suit every individual taste. And if you are able to love a car properly it will always see you right – and should never let you down as an investment,” he adds.

According to London-based investment research house Historic Automobile Group International, the values of the top 50 main collectible classic cars rose by an average of 13.9% in 2011. Cars must be worth more than €100,000 with no more than 1,000 of each model built to get into this index. When HAGI took Ferrari and Porsche cars out of the index the growth figure was 21.7%. This is because these marques already command top prices as blue-chip investments.

“Demand for Italian cars is always strong. Ferrari is the pinnacle because they consistently make fabulous motors. The whole process – design, engineering and components – is all kept in-house and this helps keep the legend alive,” says Knight. The early 1960s Ferrari 250 GTO is one of the most valuable cars, with an essential combination of beauty and pedigree. Only 39 examples of this ultra-rare legendary road car were ever made. A 1963 example sold for €25.1 million earlier this year. It had an illustrious racing career to help push up its value but even less well known GTOs no longer sell for under £7 million (€8.7 million). The GTO initially cost £6,000 new but the car’s Italian founder Enzo Ferrari personally insisted on approving every original buyer before he was willing to hand over the keys.

The Ferrari 250 Testa Rossa (pictured, right) is another prancing horse with impeccable credentials – and one of the most gorgeous looking cars ever built. A 1957 example sold for £10.4 million last year. Only 21 were ever made but, unlike the Ferrari 250 GTO, it is more for motor racing and not designed for the open road. The foot pedals cannot be operated with normal shoes and there are gaps in the floor where you can see the road fly past at up to 161 miles per hour.

A modern classic – offering an excellent place for high-end collectors to begin – is the Enzo Ferrari. Only 400 of these 12-cylinder cars were made between 2002 and 2004, when they typically cost £425,000 new. Rarity and “specials” have since pushed many examples past the £1 million mark. 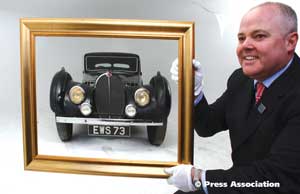 “Dear old Aston Martin – an institution everyone loves. A combination of Italian design and British engineering make it a sensational drive. There is a sense of ownership that provides a feel- good factor collectors find irresistible,” says Knight (pictured, left with a 1937 Bugatti Type 57S).

Top price was £2.6 million for a 1964 DB5 in 2010 – it was used in the James Bond movies Goldfinger and Thunderball, and came complete with revolving licence plates, “ejector seat” and “bulletproof shield”. The buyer was American collector Harry Yeaggy, who put it into his private museum in Ohio. Europe may still be seen as the home for most classic cars, but the US has some of the best collections. Russia, China and the Far East are catching up but are still only fledgling markets. 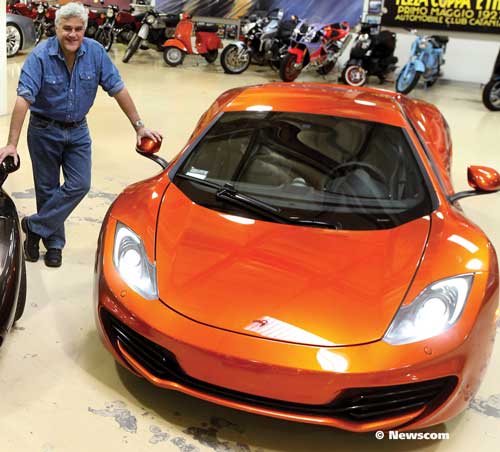 The world’s largest private collection under one roof was put together by American garbage tycoon Harold LeMay. He died in 2000 but not before bequeathing 3,000 motors to a giant car museum in the US state of Washington. Another American – chat show host Jay Leno – has one of the world’s greatest collections with more than 80 top vehicles. These range from a 1906 Stanley Steamer to a 2011 McLaren MP4-12C. Leno (pictured, right) also owns one of only 64 McLaren F1 cars built in the 1990s. The last McLaren F1 showroom model sold for £2.5 million in 2008.

The most valuable private collection is held by the Sultan of Brunei, who has as many as 5,000 cars worth £3 billion kept under lock and key in secret storage bunkers. Twenty-one of these vehicles came on the market last year – including a £1.2 million Enzo Ferrari – that had been stored in an Indonesian hideaway. However, some were not in tip-top condition as they had not been properly maintained or driven and instead had just mothballed.

Florian Seidl runs Munich-based Carficionado, a firm that offers a broker and management service for those looking to build a car collection. He points out that it is not only essential to buy the very best example of a motor you can afford, but also to continually lavish it with expensive attention. “You have to make sure classic cars are well maintained, otherwise they soon start to feel neglected,” says Seidl. “It is a crime not to drive the car. The worst thing you can do is just locking it away in a garage for a year or so. Some cars have metal coats in engines that must be heated occasionally, while rust allowed to creep into a petrol tank can also cause damage and clog up carburettors. All the rubber parts perish over time,” says Seidl.

Temperature and humidity-controlled garages can provide a great refuge for old vehicles but Seidl believes even a barn need not be discounted – wind blowing through can stop cars suffering from damp. An occasional spin is essential to keep the engine happy and also to discover between services any problems that need to be addressed before they get worse.

“Late 1960s and early 1970s supercars have become particularly sought-after by collectors in recent years and can be blue-chip investments. But classics like the Lamborghini Miura, the Ferrari Daytona and the Maserati Ghibli require a lot of maintenance – their body structure and complex electronic systems go wrong,” says Seidl. “They were at the top of the food chain in their day but are now feeling their age. Original parts are rare and often incredibly expensive, but part of maintenance.”

Seidl cites the example of a recent sale of a Maserati Ghibli (pictured) where one vehicle went under the hammer for £120,000 and a similar looking car sold for less than £40,000. “On the face of it one buyer looks like they overpaid while the other got a bargain. The reality is it might cost £100,000 to get the cheaper model into such a high-quality condition. It shows the need to get professional guidance when buying.”

Classic cars are traded on a global market with international auctions held all year round but Seidl reckons investors should focus mostly on Europe. “The most expensive car will always be bought by an American, but that does not mean the best cars can be found there,” says Seidl. “When it comes to looking after classics, England and Germany have the technical expertise and skill to provide a level of finish second to none. Originality and standards of restoration are vitally important when grading classics and the standards in Europe are superior, so this is the market to look at first.”

Auction houses offer a fabulous showcase for cars and provide an indication of prices, but when starting a collection it is best to sit on the hands. Following the heart can provide a nostalgic guide that often leads to the most suitable vehicle for a personal collection. The best cars of the 1950s and 1960s tend to lead the market for a good reason – they are the ones most fondly remembered by middle-aged petrol heads. A collectible must be rare and of high quality. It should also be highly desirable – with an artistic beauty, full of character and ideally have an intriguing provenance. Sports and competition models made in small number are most in demand.

There are plenty of publications to help with inspiration. International magazines such as Octane and Classic & Sports Car should whet the appetite and give details of auctions, dealers and brokers. After setting a budget – including a generous allowance for maintenance – it is vital to ask what the vehicle will be doing. Will there be Sunday drives around country lanes or might it end up being thrashed around a racetrack? How pleasure will be derived from the four-wheeled investment is important to the decision on what to buy.

A brokerage and collection management service may seem an unnecessary expense, but should help avoid potential heartache for the future. “A dealer will typically sell what he has in stock and you cannot usually test-drive a car at an auction. A broker sources and inspects cars after studying the whole international market,” says Seidl. “The best cars often change hands without the need to be marketed or going to auction – brokers have their ear to the ground and can negotiate on price.”

Outfits such as Carficionado also offer a full purchasing and maintenance service for between £500 and £3,000 a month depending on the size of the collection. This includes not only sourcing vehicles and providing expert guidance, but a full engineering check-up and ensuring all vehicles are maintained to high standard with details such as insurance, tax and storage sorted out.

A broker can help with storage, with facilities typically costing between £30 and £2,000 a month depending on the location. A collection of cars can be as large as space and budget allow – but it is better to own just half a dozen top condition vehicles that can be personally enjoyed and maintained without too much difficulty, rather than dozens where individual love and attention is harder to share out. 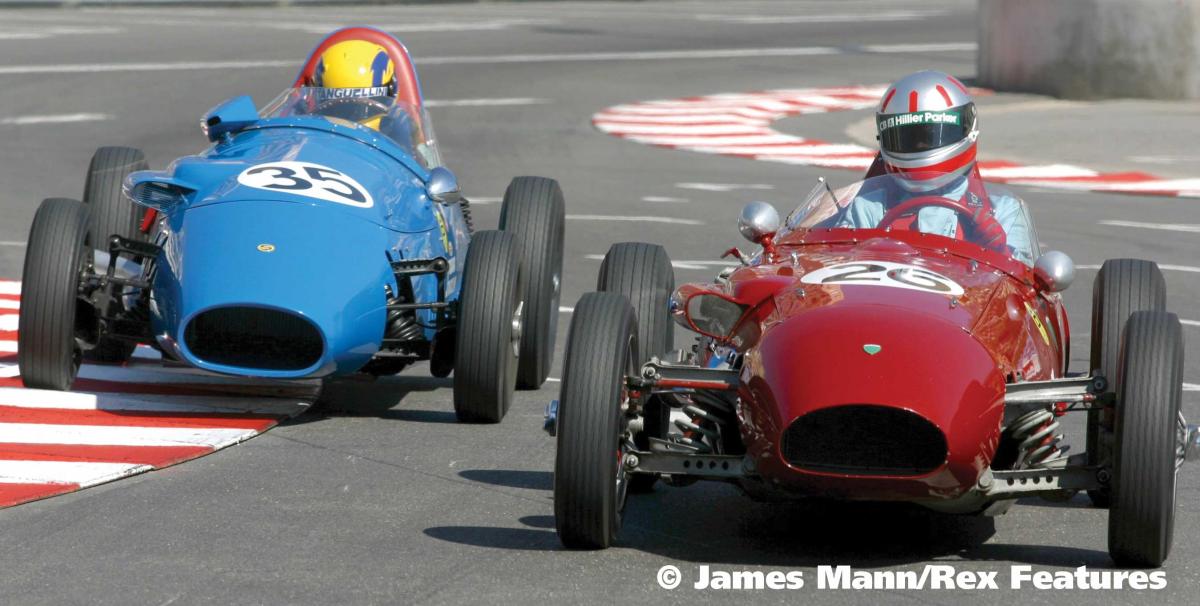 lassic car clubs provide an ideal place to offer initial guidance for anyone looking to build a collection. Club events also attract enthusiasts able to recommend brokers and give market advice. Europe is still the centre for most auctions with calendar highlights including the Monaco Historic Grand Prix (pictured, right) in May, which attracts international auctioneers such as RM Auctions, Bonhams and Coys. London is a favourite destination for auctions throughout the year, as is Paris and Geneva.

The Pebble Beach Concours d’Elegance in California, held every August, is another big auction on the calendar. In 2010, auctioneer Gooding and Company sold a 1936 Bugatti Type 57SC Atlantic for more than $30 million (€23.8 million) at this event. RM Auctions holds another motor auction up the road in Monterey at a similar time of the year. Another big car auctioneer in the US is Arizona-based Barrett-Jackson.

Americans have been re-evaluating their heritage in the last decade – partly in response to the 9/11 terrorist attacks in New York. Although traditionally most interested in European cars, they are becoming more interested in their own. American “muscle” cars of the 1960s and 1970s, such as the Ford Mustang Shelby and Plymouth Barracuda, have soared in value. A 1971 Plymouth Barracuda sold for $2.4 million five years ago that could have cost just $100,000 in the mid-1990s. However, since then prices have fallen back below €1 million. Only top-notch condition muscle cars have investment value.

There is no precise definition of a classic car – but in the UK, vehicles built before January 1973 are deemed “historic vehicles” and so exempt from road tax. Another appeal for the British market is that classic cars escape capital gains tax, as they are “depreciating assets” – even if they might rise in value. A veteran car is classed as built before 1919, while a vintage car is classified as built between 1919 and 1930.