Claire Williams: Moving up the grid at Williams F1 This is an edited version of a profile that originally appeared in the Spring 2014 edition of CampdenFB.

Motorsport and sustainability might not seem likely bedfellows, but this year Formula One is going greener than it’s ever been before. Claire Williams, whose upbringing was steeped in Formula One history and who was last year appointed deputy head of the Williams F1 team, says the motor-racing championship needs to change with the times.

Williams Grand Prix Holdings, and its founder and team principal, Sir Frank Williams, are stalwarts in Formula One. Williams, Frank’s daughter, says growing up during the team’s glory days in the late 1970s and 1980s was “magical”. “We had Nigel Mansell and Nelson Piquet; they were big names and I was lucky enough to be around them,” Williams says. With seven drivers’ championships and nine constructors’ championships, all between 1980 and 1997, Williams F1 is the third most successful team in Formula One motorsport history.

“Away from the racetrack we used to come to the factory in the weekends with dad, I think probably to get us out from under my mother’s feet,” Williams says. At the age of four, she learnt to type on the secretaries’ knees (“I can now touch type, which makes my life a lot easier,” she remarks). “I used to be given little jobs like sorting the stationery cupboard out, or making teas and taking them around the factory.” She said it progressed to working in the race team office in her school holidays, organising the logistics of booking flights, hotels and cars. 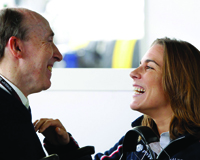 Her father (pictured with Williams, right) didn’t initially see she had a role in the family business – which in 2012 had revenues of £127 million (€153 million). Now she’s there – and, as of last year, is his deputy – they have a close working relationship, Williams explains, chatting to each other “five to six times a day”. “My office is next to his, he would like me to sit in his office I think,” she jokes. Her brother Jonathan is also on hand at the team’s headquarters near Oxford, UK, where he oversees the family’s private museum of Formula One cars. “It’s a magical museum to go into and have a look at and remind yourself why we’re all here working hard,” Williams says. With more than 100 cars it is one of the largest collections of its kind in the world, and is open to the public.

Williams, who is 38, began her career in motorsport as a young graduate working for England’s Silverstone Circuit. She says working outside the familiarity of Williams F1 gave her a good foundation for routine and discipline. “It was great because it gave me the opportunity to come out of the family business and to do something completely different and be treated in a very different way as well.” 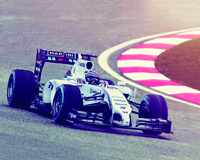 Williams returned to the family firm 12 years ago – joining the marketing and communications division, which she said hadn’t even existed five years earlier. “[Back then] it was very much a case of stick a logo on a car and the car is your 200-mile-an-hour advertising billboard and that was it,” Williams says. “The partnerships today are so much more complex than that, they deliver so much more value than that.”

The biggest change to communications strategies Williams has seen in recent years is the proliferation of digital and social media content. “We’re a team sport and we have millions of fans that want to know what’s going on, not only on the racetrack, but also behind the scenes.” The Williams F1 Twitter account, for example, provides regular updates to its more than 270,000 followers. Its Facebook page is even more popular with over 500,000 likes.

While Williams grew up during the team’s glory days, Williams F1’s record over the past decade has not been so successful. Since 2004, the team has only won one race (with Pastor Maldonado taking his first Grand Prix victory in Barcelona in 2012). Last year, Williams’ first as deputy team principal, was one of their worst ever with the team scoring only five points (in Formula One the top six finishers are awarded points according to their placing). By comparison, winning team Red Bull Racing clocked up 596 points. “It was a difficult year for the team, I don’t think I expected it to be such a challenging year for us,” Williams concedes. Behind the scenes, however, movements were being made in the right direction, Williams explains.

Under the new rules, enforced by the Fédération Internationale de l’Automobile (FIA), the organisation that establishes Formula One competition regulations, 2.4-litre V8 engines have been replaced by 1.6-litre V6 hybrid turbo units, which redirect energy that is normally wasted from braking and the turbocharger back into the engine. Teams also have a fuel cap of 100kg per race rather than 150kg. Formula One president and chief executive Bernie Ecclestone, whose job it is to make the competition into a moneymaking venture (something he has done with great success), opposed the move. He says the new engines cost teams three times what they previously spent – and the cars don’t sound “right”.

The opposing argument is that the huge amounts of research and development invested by Formula One teams flow to the wider automotive sector, where energy efficient technology, as opposed to fuel-guzzling V8s, is increasingly important. Williams explains: “The world is changing and the move to electric vehicles is hugely important. As a sport we have to ensure we are listening to those messages coming out.” And the sound? Many fans took to social media complaining the new engines were too quiet, following the first Grand Prix of the season in Melbourne, Australia, in March. But, at a post-event press conference, Williams said she believed fans will eventually get used to it, just like they’ve got used to many other changes to the sport over its history. 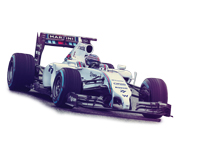 With the energy efficiency changes this year, Williams F1 has moved from a Renault to a Mercedes engine, which, from the start of the season, had been declared the one to beat (Formula One teams lease engines from one of three makers this year: Mercedes, Renault and Ferrari). Williams said at a press conference in March that the team aimed to score a point in each of the season’s 19 races, and the team clocked in 10 points at the first race in Melbourne. Just ahead of the Hungarian Grand Prix, the team was coming in third with 121 points under their belt.

At the pre-season tests in Bahrain, the team’s car – the FW36 – ran for an impressive 936 laps before hitting its first major failure. Red Bull Racing, with a Renault engine, completed 320 in comparison. Williams F1 have also recruited talented Brazilian driver Felipe Massa, who had been with Ferrari for the past eight seasons.
On top of engine reliability and fresh blood, Williams F1 has also started off the season with a sleek new sponsorship – the livelihood of Formula One teams – partnering with Martini, whose classic blue and red stripes now adorn its cars. Williams explains that sponsorships are that much more important as an independent team: “We don’t have the support of a major car company to keep us racing. We rely on other companies to sponsor our team, to partner with us, and that generates our income to keep us going.” Men’s magazine Esquire also became a partner, and Massa and his Finnish teammate Valtteri Bottas now pen pieces for the monthly glossy.

Formula One business journalist Sylt explains without a big corporation behind it, Williams F1 has had to keep its costs down and sponsorship is cheaper as a result – something that is appealing to companies in today’s economic climate. “The costs of Formula One normally necessitate huge corporations getting involved, so family businesses shouldn’t really get involved. But Williams has managed to remain effectively a family business, with a single person whose name is on the team.”

Williams agrees the team’s family ownership is a way to differentiate it from the competition. Other differentiating factors include its partial listing, its history in the sport, and the fact it’s won 16 world championships. As she explains: “It’s a real British team, and it’s all about the British underdog rising up and beating the likes of the Ferraris of this world, with a budget twice as big as ours and a brand name twice as big as ours.” More than a quarter of shares are listed on the Frankfurt Stock Exchange, with Sir Frank Williams retaining a 51% stake in the team. It’s current market capitalisation sits around €185 million.

Two family firms that have signed sponsorships with Williams F1 are welding equipment manufacturer Kemppi and industry and trade conglomerate Wihuri, both from Bottas’s home nation, Finland. “The synergy our business has with other businesses that are family run sets us up on a very good platform to create a very meaningful relationship,” Williams says, adding: “You’re talking the same language from the outset, when you have that similar structure, or are both family businesses.”

Outside sponsorship, prize money generally makes up the remainder of a Formula One team’s budget (around $700 million is split between 11 teams, based on their success on the track).

When it comes to the team’s CSR programme, energy efficiency on the track is joined by road safety (Sir Frank Williams has been in wheelchair since a road accident in France in 1986) and education – encouraging school pupils to become engaged in science, technology, engineering and maths (known as the “stem” subjects).

The education programme targets all students, but Williams notes women are increasingly taking up roles in engineering and design at the company. She estimates the latest intake of recruits to Williams F1 have been about 50% women. “It’s changing,” she says of the sport that has such a male-dominated image, adding: “But because those roles are behind the scenes, they’re not seen front-of-house, on the television, when you watch the Grand Prix, people don’t realise our sport is much more diverse than perhaps some other industries are.” The team also has a female test driver, Susie Wolff, and outside Williams F1, Monisha Kaltenborn is chief executive at Sauber.

When it comes to making her mark, Williams, who is widely pegged to eventually head the company, says she doesn’t focus on the large shoes her father, who she describes as an “icon”, has left for her to fill. “I have to focus now on the future of the team, and if I let that intimidate me I don’t think I’d be able to drive the business forward and achieve success.”

She would like to recreate his accomplishments and achieve what he’s done in the past: winning races. “We’ve had a really lean period for a number of years now. The greatest legacy we could create for Frank would be to turn this team around and try and recreate some of that success he’s had.”