Wanderlust can rarely have made such a profound change on a business as the 19-year-old Mikkel Vestergaard Frandsen’s desire to travel to Africa. The scion of a Danish business that made linings for uniforms, he set off to Nigeria and ended up transforming the family firm into a producer of insecticidal tents and the innovator behind a pioneering public health programme in Kenya.

“Each generation has put their fingerprint on the direction of the company,” says Mikkel. “My father transformed it from a producer of fabric to a maker of workwear which focused on making ‘profile’ clothing for workers such as hotel receptionists and cashiers. I have transformed it into a business focusing on doing social and environmental good.”

The catalyst for this transformation was a desire for adventure rather than any altruistic intent. “In my late teens, I had a need to go somewhere where the ice was a little thinner than in Denmark so I moved to Nigeria and started a business there. I didn’t really know what Nigeria was all about, but I knew it would be nothing like Denmark – a society where you have your good salary, your study is paid for, transport is subsidised. I wanted to get away from that.”

Mikkel started a company importing trucks from Europe and selling them in the west-African country. “At the age of 19, your business plans are not very detailed or precise, but it went very well for about a year.” Then, in 1993, there was a military coup that made it very difficult to do business so the young entrepreneur returned home to Denmark. 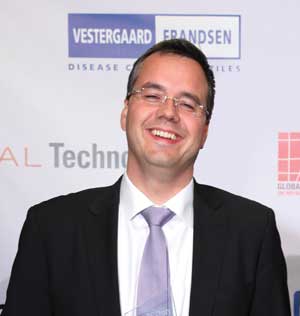 “My father was very excited about me joining the business, but my desire was to keep working in Africa,” he says. “My dad was incredibly flexible and open to ideas – he agreed that I could sell to Africa and the Middle East but at the end of the day, it was a textiles company so that was what I was selling. My father had a desire that I should take over the family business and I was equally clear that I did not want to manage a traditional textiles business that made work uniforms,” the now 40-year-old Mikkel (pictured, right) says. “If you manage something that you are not interested in, it doesn’t work.”

Mikkel spotted an opportunity in the business’s recent expansion into providing tents and blankets for aid organisations.

This led him to establish distribution hubs in Nairobi and India, from where the company’s products were sent to places such as what is today South Sudan, Somalia, the Democratic Republic of Congo and northern Tanzania. This unit of the business did so well that by 1994, it had outgrown the rest of the company and three years later Mikkel bought it out from the original business.

“I regard myself as a first-generation owner of a third- generation company,” he says. But the business then faced a fundamental challenge.

When, in the late 1990s, the internet allowed manufacturers from India and Pakistan to start bidding against Vestergaard Frandsen for UN contracts, the company had to respond. “We had already invented an insecticide-treated fabric that could control the release of the insecticide over time. It was used in tsetse fly traps. We had to make a choice whether to have a company where most of the staff are in sales or one where most of the people who work here are scientists,” says Mikkel. “We were at a strategic crossroad – I made the decision to change direction and we went for it.” 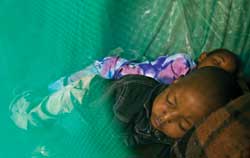 And so Vestergaard Frandsen became a company specialising in complex emergency response and disease-control products. These include PermaNet (pictured in action), a long-lasting insecticidal net that is now recommended by the World Health Organization for the treatment and control of malaria, and Lifestraw, a portable water filter that protects against diarrhoeal diseases – one of the biggest yet most preventable killers in poor countries. The bigger Lifestraw Family filter delivers up to 18,000 litres of safe drinking water.

While Vestergaard Frandsen is a company whose products are still rooted in the textiles business that it started out as, innovation and adversity have changed it into a business with a completely different mission, one that is focused on improving public health in some of the world’s poorest countries. Its headquarters are in Switzerland “because I spend so much time flying there to talk to UN health organisations all the time”, Mikkel says. “About 50% of all the major decisions on public health take place in Geneva.”

The need for innovation is not just about the company’s products, he adds. Given the state of the global economy, companies involved in the development sector also need to look at new ways of doing business. “The appetite of governments to invest in development aid is under pressure. They cannot keep throwing new money at old problems so it is crucial that there is new thinking around development aid, particularly the sustainability aspects." 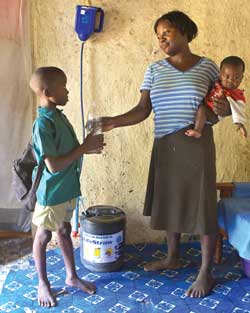 One solution is the company’s Carbon for Water programme, which uses carbon credits to fund a scheme to bring clean water to millions of people in Kenya. Vestergaard Frandsen distributed almost 900,000 of its Lifestraw Family water filters (pictured in action) to families in the country’s western province free of charge, but earned 1.4 million carbon credits in the process. This is because the filters mean people don’t have to boil water before they drink it, which means trees don’t have to be cut down for fuel.

The key to the success of the initiative, the company says, is that it only gets paid for performance – something that is often missing from aid projects. Funding for the project is contingent upon use of the filters by recipients, so Vestergaard Frandsen is incentivised to promote filtering of water and avoidance of burning biomass by educating households on the importance of drinking safe water and training them on the filter itself.

The credits, issued through the Gold Standard climate finance platform, can be bought by companies, individuals and even governments that want to offset their own carbon emissions and the money will be recycled into the programme to repair and replace the filters when needed. Mikkel believes that carbon trading combined with development aid is the future. “Why should a government such as the UK’s be obliged to offset their emissions on the one hand and to give millions of pounds to aid projects when they can buy credits that do both?" he asks.

Introducing the Carbon for Water programme cost $30 million (€23.5 million), and Mikkel says that the investment could only have been made by a family-owned business. "If this was a publicly owned company I would have been sacked,” he says. “It is only because we are able to take a long-term horizon on the risks involved that it was able to work. Investing $30 million is a substantial risk for a company of our size.” Mikkel says there is no reason why the concept cannot be applied to other public health and sustainability issues including sanitation, agriculture and food security

Nonetheless, he adds: “This is essential for the future of our company.” And he is adamant that what he is doing is business, not philanthropy. “We are very clear that this is a business opportunity but also that we are at a point where doing good is good business. We have not been put in a position where we have to choose.” 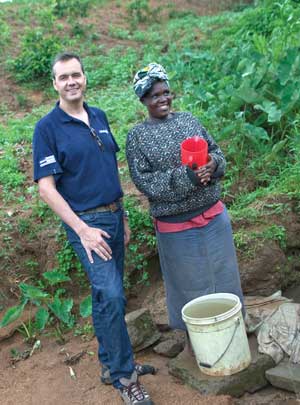 Others clearly agree. Before the financial crisis, “private equity organisations were offering us mind-numbing amounts of money to share the ownership of the company”, Mikkel says. “I entertained them up to the point that I would have had to commit to a deal. My identity is way too attached to that of the company.” And why not – he has created something unique. “We are aware that we are creating a new space around humanitarian entrepreneurship by providing a profitable way to save lives. We’re using market forces to improve the lives of people in the world’s poorest countries.”

Vestergaard Frandsen was founded in 1957 by Mikkel’s grandfather Kaj and a friend, making the linings for jackets and uniforms. The friend soon left the business, leaving Kaj to go it alone, and he started specialising in women’s uniforms. In 1970 the business was taken over by his son, Torben.

When Mikkel returned from Africa in 1993 his father had just bought 1.5 million square metres of woolen fabric from Swedish army warehouses. Mikkel suggested turning it into blankets and sold it to aid organisations in the Democratic Republic of Congo, where refugees were escaping the civil war in Rwanda. Within two years this part of the company was making more than the uniform manufacturing.

Soon the company was focusing heavily on technological products to help people in the developing world. In 1997, the work uniform operations were sold to concentrate entirely on the humanitarian business. Vestergaard Frandsen has developed innovative products such as PermaNet bed nets which are impregnated with an insecticide that repels mosquitos and lasts for years. PermaNet and products like it have contributed to the reduction in malaria deaths over the past decade by over 25% globally and 33% in Africa. Lifestraw is a drinking tube that removes bacteria, viruses and parasites from untreated water – it is so iconic that it is in the Museum of Modern Art in New York. The Lifestraw Family is a bigger version, which can filter 18,000 litres in its lifetime, enough to last a family for three years. Other company initiatives target HIV/AIDS, climate mitigation and alleviating hunger and malnutrition.