Beer in the blood

"Beer is proof that God loves us and wants us to be happy," said Benjamin Franklin. Why do family businesses do so well in the brewing sector? CampdenFB finds out. “Beer is proof that God loves us and wants us to be happy,” said Benjamin Franklin. Leaving aside the theology, the cold, hard figures suggest that the age-old mixture of water, barley, yeast and hops does indeed put a smile on faces the world over. Global beer consumption has increased 3% a year over the past decade.

Beer is, oddly enough, a product that seems to attract family businesses, including the industry’s dominant players, Dutch conglomerate Heineken and Belgian-Brazilian group AbInBev. Down at the smaller end of the market too, family brewers are flourishing.

Take, for example, Kent’s Shepherd Neame, one of the UK’s best-loved brewers and perhaps most famous for its mildly German-bashing advertising slogans for its Spitfire brand, which it calls The Bottle of Britain. (A typical slogan: “Downed all over Kent, just like the Luftwaffe”). The brewer has a formidable history, and boasts that it is Britain’s oldest brewer, tracing its roots to 1698 when an existing small brewery in Faversham was bought by Samuel Shepherd. Businessman Percy Beale Neame came into the company in 1864 and when he died in 1914 he left it to his 10 children.

It is now in its fifth generation of Neame family ownership and Percy’s great-great-grandson Jonathan (pictured) – a former barrister and a strategic consultant for the COBA Group before joining the family business in 1991 – is chief executive. 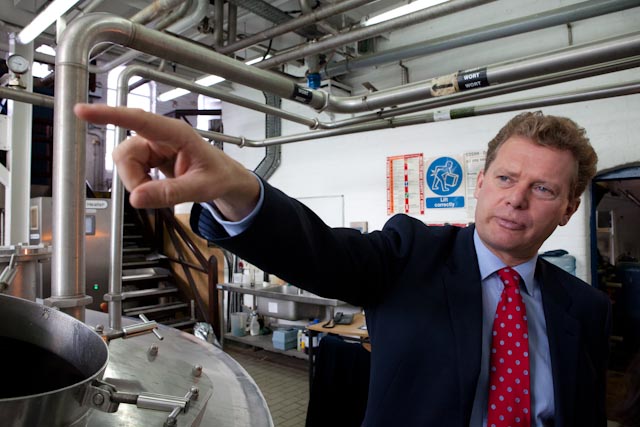 Speaking in his office at the brewery in Faversham, which is on the same spot as the one Percy bought, he explains that despite a hard time for the industry (the smoking ban, a general decline in pub-going and the downturn have been a damaging triple-whammy), things are good.

The brewer, which also owns 352 pubs, says that profits rose by around 10% in 2011 while sales increased by 5% to more than £120 million (€143.6 million). British beer consumption is on a long-term downward trend and has dropped 11% since 2004, and so like many in the drinks industry Shepherd Neame has responded by focusing on food and improving the look and feel of the pubs. In the past year it took on 80 refurbishments and 70 external decorations. It also owns eight hotels in quaint Kent locations, including recent acquisitions in Sandwich and Fayreness.

“The growth in profits, despite the crisis, wasn’t the result of anything we did this one particular year, it is the cumulative impact of thinking for the long term, while continuing to invest in the downturn,” says Jonathan. This, he reckons, is directly down to the family ownership, which means that there is no need to appease short-term investors hungry for quick returns.

The Neame family members hold all the voting shares and half of the equity shares of Shepherd Neame. To emphasise just what these mean in practice, he pulls out the latest Shepherd Neame annual report, flips open a page and points towards the list of the board of directors, the breakdown of share ownership and a detailed presentation of the company’s accounts. More than 100 Neame family members hold voting shares, and eight of them work in the business.

Jonathan’s father Robert is president of the board, while his sister Moray Bishop is communications executive. A cousin is in charge of property and tenants, while two others are non-executive directors. Two more cousins, although not part of the board, complete the family’s presence in the brewery.

That sounds complicated, which is why Jonathan stresses the importance of openness. “Our family culture is to be open and transparent, with the highest levels of governance and professionalism in operations – it is just easier running a family business where you are transparent about what you do,” he says. 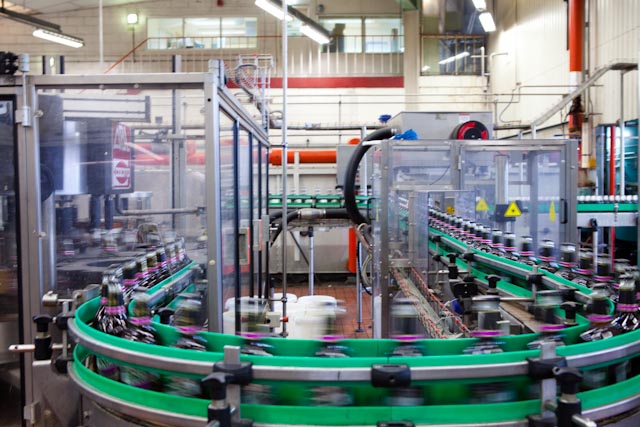 The family presence is important, then, but treating family and non-family shareholders equally is fundamental. A large number of its outside investors are other families from around Faversham and to make sure they know what’s happening in the business they hold an annual general meeting. “It is an active engagement and we make sure that everyone – shareholders, family, employees and local community – is clear about what the business is trying to do and the direction it is going,” he says.

Roots are evidently important for Shepherd Neame and Jonathan calls it “something of a community business”. He lists a number of sponsorship activities the business is involved in, such as the Faversham Hop Festival, a music event for 20,000 people held in September. They also contribute significantly to the local economy, running 250 pubs in Kent, which use 1,500 local suppliers. In all, the business employs 4,500 people. “Closed organisations only create suspicion and we want to engage with consumers and community,” he adds.

While the business is in a good place now, it has not all been plain sailing in recent years. A family dispute – now resolved – that is thought to have cost the business significant money in legal fees triggered the appointment of a non-family member as chairman in 2005. It seems to have worked. The brewer received the family business award by Coutts in 2009/2010.

Jonathan says the dispute “gave family members a chance to consider what the business is all about”. He adds: “Shareholders were determined that we remain the type of company we are – independent, private and family-controlled. And considering the business is getting bigger every year, we didn’t think it was appropriate to have a family member who was chairman and chief executive at the same time.”

The minutiae of the business’s ownership structure apart, Jonathan is clearly passionate about the industry. He is vice-chairman of the British Beer & Pub Association, and is one of 30 members of the Independent Family Brewers of Britain.

After the family dramas and the changes in the industry over recent years, Jonathan is in no doubt about the challenges facing him, but seems positive about the future. “We have had a brutal three years and steering the business through that period has been extremely pressured,” he says. “The business has to be good in terms of asset base, dividend, financial performance or an investment to keep the family engaged. But it has been a job well done so far.”

At the other side of the world, another family-owned brewer is also going from strength to strength. Coopers Brewery recently became the biggest Australian-owned brewery, albeit by default, following brewing giant SABMiller’s takeover of Fosters.

Tim Cooper (pictured right), the fifth-generation head brewer and managing director at the company that was founded in Adelaide in 1862 (and which therefore celebrates its 150th anniversary this year), insists that he has no thoughts about following Fosters. Family ownership is central to the business that his great-great- grandfather started – the family controls about 90% of Coopers’ shares. “Shares of Coopers are a legacy that family members inherit from their parents and should be transmitted to the next generation,” he says.

Indeed, just one look at the man who runs the business and it is clear that he lives and breathes it: his tie is emblazoned with frothing tankards and glasses of Coopers beer.

For the Cooper clan, like many family businesses, working outside the company is considered vital. After high school Tim studied to become a doctor, spending seven years working as a cardiologist in the UK.

Does he worry about the health impact of his family’s product? “During the early 1980s there were more and more papers showing the benefits of moderate alcohol consumption,” he says. “That was quite reassuring.”

After leaving medicine he gained a degree in brewing from Birmingham University before joining the family firm in 1990. Tim’s cousin Glenn is chairman and managing director, but also has plenty of outside experience – before joining the family business he first worked for a technology company, before setting up a multi-million- dollar business dealing with computer sales and services. Tim’s brother and sister also hold top positions at the group, while his father Bill retired in 2009 following 40 years on the board of directors.

For Tim, his father’s vision for the company still resonates. “His view was that we must embrace and protect the family nature of the business and preserve the independence by not expanding the capital base,” he says.

Coopers has also been coping with a long-term reduction in beer consumption as drinkers switch to wine. In 1948/1949 Australians drank 190 litres of beer per person, which reduced to 107 litres per person in 2008/2009, says the Australian Bureau of Statistics.

This might explain why Coopers saw its revenues drop to AUS$ 173 million (€140 million) in 2011, from its AUS$ 179 million the year before. But despite the fall, Coopers has boasted growth at an average rate of 10% a year during the last 15 years.

The company is proud of its roots and has been known to use its ownership structure to its advantage. Advertisements for their dark brew in the late 1990s featured Grandfather Cooper in a black felt hat, with the slogan “from the dark side of the family”. It’s a wise move. Research has shown that consumers are twice as likely to buy from, or use the services of, a family business, but “too few Australian family firms use this to their advantage”, says Philippa Taylor, chief executive of Family Business Australia, a lobby group for family businesses.

Tim and his cousin’s success in turning the business around has not been without its problems and they had to ward off a takeover in 2005 from minority shareholder and rival company Lion Nathan, which is now owned by Japanese alcohol giant Kirin Holdings Company.

“Only [Coopers’] peculiar shareholding structure, and the family’s commitment to the business saved the business from being taken over,” adds Taylor.

Following a three-month battle for control, the company introduced pre-emptive rights, which gave the family shareholders the right to buy new shares before they are offered to the public. It also led the firm to take action to strengthen the family’s commitment to the business. To avoid family conflicts, emphasising the history of the company is as important as keeping the business growing, reckons Tim. “This makes sure every family member knows the firm has managed to survive and pay dividends to shareholders.”

Like Shepherd Neame, Coopers has come through its problems and seems as strong as ever. Anybody, surely, would drink to that continuing.