We are creatures of habit. We find it reassuring when day follows night, spring follows winter and lunch follows breakfast. But that doesn’t stop us worrying about the future because anxiety is at the core of our instinct for self-preservation. By not thinking how things go wrong, we put ourselves at risk.

We are creatures of habit. We find it reassuring when day follows night, spring follows winter and lunch follows breakfast.

Social progress has made our life ever more predictable. Rather than worrying about where to get our next meal, we know our local supermarket’s open seven days a week. Instead of foraging for wood to burn, we switch on the central heating.

Over the last 30 years, we have also been reassured by economic growth, punctured by occasional setbacks of up to three years, following overreach.

But that doesn’t stop us worrying about the future because anxiety is at the core of our instinct for self-preservation. By not thinking how things go wrong, we put ourselves at risk. Which helps explain why astrology is still so popular.

Probability theorist Nassim Taleb is not impressed. In his book The Black Swan, he argues mankind has a woeful track record in forecasting the future: “We produce 30-year projections of social security deficits and oil prices without realising that we cannot even predict those for next summer.”

Sadly, we have become more desperate to foresee the future, as economic prospects continue to worsen five years into recession.

Precedents are few and far between for such an event. So it looks like the time has come to dust down the theories of Nikolai Kondratiev. 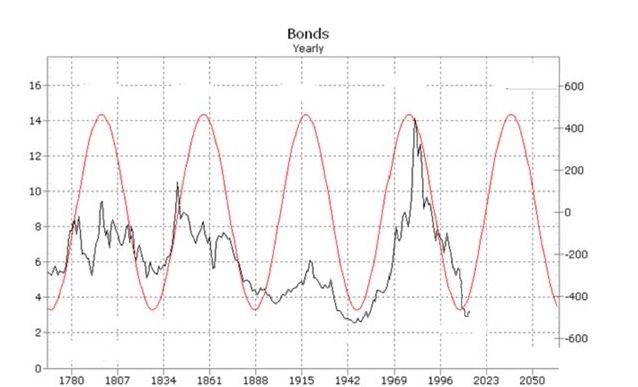 A Soviet economist, born in 1892, he argued that economies travelled through cycles where 30-year up waves boosted by capital investment and innovation are followed by 30-year down waves accompanied by rising costs and falling investment (see chart above).

There is evidence to suggest the cycles are speeding up, but the worst-case scenario is we have another 25 years of gloom to endure. Sorry about that.

Mr K’s disciples argue the west experienced an up wave in the early 19th century following the introduction of steam engines and cotton mills. Railways and steel triggered the next, to be followed by electrical engineering and chemistry, petrochemicals and cars, and, finally, information technology.

Stalin’s government was unimpressed with Kondratiev’s argument that capitalism would see continual rebirth. He was sent to the gulag and executed in 1938.

But influential Austrian economist Joseph Schumpeter agreed with Kondratiev. He said waves would rise and fall under the stress of “creative destruction” as innovation led to the continued destruction of outmoded businesses.

Schumpeter also argued that the fruits of capitalism would encourage individuals to vote for governments with socialist instincts out of anxiety for their own future. This would lead to down waves of heavy public sector expenditure and weakened entrepreneurial spirits.

Costs, debt and taxes have indeed been piling up in the west, particularly after 2008 when western governments were forced to borrow huge sums to bail out the banks and anxious depositors.

And it looks likely the US government will continue to do what it takes to protect the finances of its citizens following President Obama’s re-election.

What next? Former Goldman Sachs strategist Charles Nenner thinks he knows the answer. And this is where things get really gloomy.

Drawing on Kondratiev’s wave theories, Nenner uses computers to plot the cycles that drive the prices of stocks, bonds and gold. Prices can never deviate away from them for long, he argues. You can’t buck the cycle.

Nenner doesn’t like what he sees in the US Treasury bond market one little bit, saying a 30-year fall in yields is drawing to a close as US debt levels rise.

The trend began when Paul Volcker, former chairman of the US Federal Reserve, squeezed inflation out of the system and started to lower rates.

If you look at Nenner’s graph, you can see the latest fall in Treasury bond yields has caused them to overshoot the bottom of the cycle.

Previous cycles have not been extreme, and maybe the next one will be restrained.

Even Nenner expects a deal this year to stop the US falling over the fiscal cliff. But he anticipates a sharper reversal when long-term investors, including the Chinese government, start to sell.

And if that doesn’t make you anxious about the future, nothing ever will.