Faber-Castell is celebrating 250 years of pencil making. Count von Faber-Castell, veteran family business icon and the chairman of the eponymous company, talks to Peter Crush about the challenges the company faces today and how they have changed since his last FB interview seven years ago. It’s odd to label a business as belonging to a bygone age when its sales are worth more than €500 million a year. Count Anton Wolfgang von Faber-Castell, the eighth generation head of German pencil and writing instruments company Faber- Castell, understands the apparent irony.

As the company celebrates its 250th anniversary this year critics might say that this will be the last big milestone for the famous Nuremburg-based pencil-maker. “Everyone thinks pencils are finished,” says the count. “I simply say – we will still be selling pencils in 10, 20, 30 years from now – it’s just a case of how many.”

Sales of more than two billion pencils a year – around a sixth of the global market – means that demand would have to fall dramatically before Faber-Castell was in trouble. Yet the count’s comment indicate a mellowing in his attitude to his company’s future, certainly compared to the time he was last interviewed by FB seven years ago.

Back then, Faber-Castell thought that pre-school colouring pencils would drive growth, especially in India and China. But with these markets gaining maturity – for instance China now buys 40% of the world’s pencils – the count is aware the market today is in a different place. Only 30% of the Faber-Castell business is now pencil-related – the rest is ballpoint pens, erasers and countless associated product lines such as highlighter pens, executive pen/pencil wallets and ink pens. 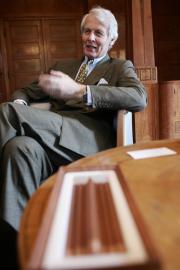 As with so many European brands, Faber-Castell reckons that the way forward is to add value to the existing products and charge a premium for the “made in Europe” stamp. Indeed, for the past 20 years the pencil-maker has been promoting its premium brand Graff Von Castell range which sells, among other products, the company’s most expensive pencil, a €129 writing instrument with a silver-plated top. “Our office sales are still around 45-50% of the market,” says Count von Faber- Castell. “But it’s the top end we want to push – luxury writing instruments that appeal to what we see as new markets: the ageing population, people who want to buy something that’s more indulgent.” This is nothing short of a business overhaul. The aim is that premium products will comprise 35% of the total business; currently it’s only 10-15%.

The move carries on a proud family tradition of innovation for which the count’s forefathers were famous. It was Lothar Faber – when the business was still called AW Faber, before the marriage into the Castell dynasty – who in 1843 established offices in the US. He also got patent protection and copyright to place the AW Faber name on the world’s first hexagonal pencils. It is just this type of branding that the current count thinks will pay dividends in the modern marketplace.

“Nowadays branding is changing. A brand for its sake doesn’t work anymore,” he says. “But we also think luxury is being redefined, and I believe our brand carries weight. Not every business has a count! But seriously, I think ‘made in Germany’ carries extra weight these days.”

There are times when the count seems genuinely torn between the concepts of luxury and affordability. Especially because the seven previous chief executives opted for what he sees as the wholesale attitude – sell lots at a low price. “The problem with premium is that you have to have an argument [with the customers] about why they should buy it, when cheaper items exist,” he says. Faber-Castell does sell luxury products, such as a limited edition Pens of the Year range, exquisitely made products with diamonds and platinum which cost up to €9,000. But rivals have a much more prestigious place in the market.

The most obvious competitor is fellow German pen maker Mont Blanc, which continues to see demand increasing for its most famous Meisterstück 149 fountain pen despite having changed its design little since its introduction more than 80 years ago. Last year, Mont Blanc was the second most profitable brand for its owner, luxury goods holding company Richemont.

So how can Faber-Castell compete? Again, the count has a radical vision. For too long, he says, resellers have been the weak link in the company’s growth – failing to sell the “brand” as it exists in his mind, because they want to sell a range of pencils and pens, including rivals’ products. “The trade can’t guarantee visibility of our brand in the marketplace. Only we can,” he says. “My vision for the future is to see ourselves operate more as a retail business.”

Already, Faber-Castell has begun opening “boutiques within boutiques” – such as units within Harrods, John Lewis and Harvey Nicols in London. More will follow. “We will sell products that the trade finds difficult to sell,” he says, meaning its luxury items.

Since last being interviewed by FB, Count von Faber- Castell has also seen the emergence of another threat to the business: counterfeiting. China, the market he broke into, is now repaying him by flooding the world with inferior Faber-Castell-stamped products. “Ten percent of all ‘Faber- Castell’-named pencils are fakes,” he says. “I wish I could see how their factories make them.”

He sees the black market as a brand-spoiler, another reason that the company should aim for more control over how its products are sold. “I don’t even rule out selling direct, via online Faber- Castell stores,” he adds.

The count cites the three founders of Starbucks – Jerry Baldwin, Gordon Bowker and Zev Siegl – as his business heroes. “They’ve been able to trade-up a cup of coffee into a premium brand, but do it with authenticity,” he says, admiringly. He sees this as a model for transforming the everyday pencil into a luxury lifestyle item.

This task won’t be easy, he admits. “The next generation always gets it harder,” he says, perhaps nodding to the fact that moving the business forward will ultimately be the task of another Faber- Castell. The count’s son Charles, 31, currently works as an analyst for a private equity company in Texas and is probably the most likely candidate to succeed his father, who is 70.

This might not happen any time soon – the count says that he’s more than capable of directing company affairs into his 90s. Nevertheless, he’s aware of the importance of bringing in new ideas. “Business cycles seem to be getting faster all the time – product lines now live for weeks rather than years,” he says. “We have a story, but we need to combine traditionalism with progression. If you live in the past, you’re just a traditionalist.”

So he is a realist. Ultimately, though, it’s a love of the product that drives him. “Families come and go; it’s the brand I’d like to live for another 250 years,” he says. “Some family businesses fail to understand the difference.”